What does Henry Boucha, Minnesota’s most famous Native American athlete, think about Sam Bradford — should the Vikings’ star quarterback talk about his Cherokee roots?

“Oh, it would be wonderful,” said Boucha, sitting last week at Five Watt Coffee in Minneapolis, and sporting a baseball cap festooned with the logo of his high school alma mater, the Warroad Warriors. “But people don’t even know [Bradford is part Cherokee] because he doesn’t talk about it. People just don’t talk about it.

“It’s the same with [former Vikings safety] Joey Browner. He’s black, but he’s half Indian, from Ohio, and when he was growing up the Indians were so undeservedly targeted for being Indian that his mother and dad said, ‘Don’t tell anyone you’re Indian. Just say you’re black, and you’ll get through.’ So now he’s come out as half Indian, and he’s a good friend.

“But a lot of people won’t talk about it. Some of my cousins in Michigan were brought up the same way — their mom, dad, grandma and grandpa would say, ‘We don’t want to talk about that. We don’t want people to know we’re Indian.’ But now it’s kind of going the other way, where they’re digging out their old papers that will show some connection to a tribe, somewhere.”

Because of that mindset and because “nobody’s ever done this before,” Boucha is on a mission to tell the tales of Native American Olympic athletes via a planned series of one-hour documentaries. A former star in high school and with the Minnesota North Stars and Detroit Red Wings, Boucha himself is one of America’s most accomplished Native athletes, a full-blooded Ojibwe who won a silver medal in the 1972 Olympics in Sapporo, Japan.

“There’s 17 in Canada and 23 in the United States,” according to Boucha; the irony being, of course, that the U.S. Native Olympians represented and played for a country that was built on the blood of their ancestors.

“I think a lot of us are overlooked, and I think we’re great athletes, and I think we get overlooked more than others,” said Boucha, now a real estate agent and hockey coach whose career was cut short at age 25 when a Boston Bruins player viciously gouged his eye. “Then there’s the alcohol and drug [addiction] that starts when they’re young. And sports is a great discipline builder.

Boucha got the idea for his film project in 1992, when he and three other Native Olympians were honored at a pow wow in Albuquerque, New Mexico. From there, Boucha penned an autobiography and launched Boucha Films, which is overseen by a board of film and hockey professionals, and has drawn interest from the NHL, the Minnesota Wild, the Sundance film festival, Netflix, and ESPN’s 30 for 30 mini-documentary series.

“It was after the pow wow, having had the dialogue with all these wonderful people, that I started thinking about it,” he said. “There’s 600 reservations in the United States, and an indigenous population worldwide, and nothing like this has ever been done. I thought, ‘We have to do a one-hour documentary series.’

“Most of our stories are similar, because of the determination and not wanting to be an Indian. When I was growing up, I didn’t want to learn my culture because as an 8-, 9-, 10-year-old, watching a John Wayne movie, the drunk Indian would always be the villain and I would just sink in my seat. So when my mother wanted to teach me the language and to wear any regalia that had been part of the tradition, I was embarrassed, so I never wore my culture.” 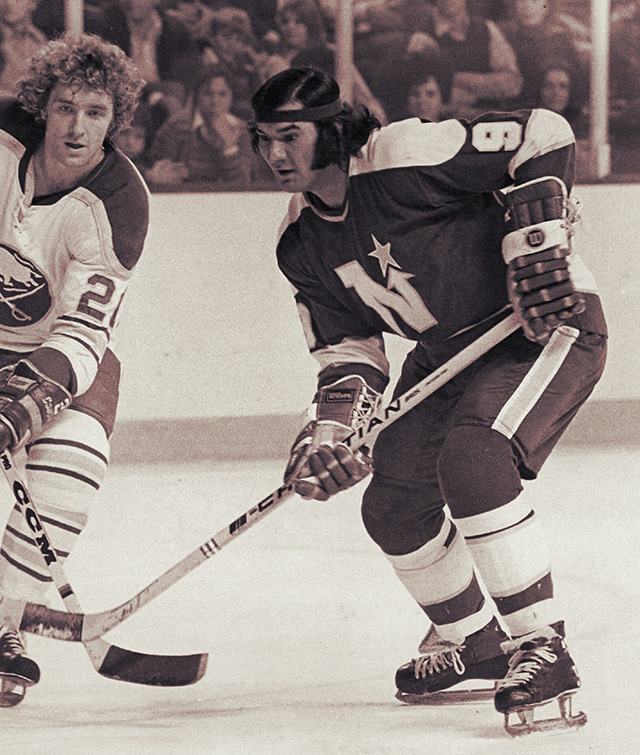 Courtesy of Henry Boucha
Minnesota North Star Henry Boucha in a game versus the Buffalo Sabres.

These days, Boucha is embracing his culture like never before, busily putting together a Boucha Films fundraiser in March, and looking to adapt his life story for a feature film. Stay tuned.

“We’ll be knocking these documentaries off in the next few years,” he said. “And I think you’ll see more and more producers, directors, and actors of Indian descent telling their stories, because they’ve never been told. There were a hundred million Indians killed in this country since the colonization of the United States. We were down to 350,000 at one time. We’re a growing population now, and all of that irony, all of that drudgery has been suppressed in the history books.