In little asides throughout the preseason, Lynx Coach Cheryl Reeve let it be known she is officially tired of being reminded how old her team is.

Seven of the 11 players expected in uniform for Sunday night’s season opener, against Chicago at Xcel Energy Center, are at least 30, including every starter except Maya Moore. Last year the Lynx fielded the oldest Opening Night roster in the league. And after adding rugged 35-year-old forward Plenette Pierson as a free agent, they almost certainly will again.

So when Reeve met with reporters on Lynx media day and opened her remarks with, “The first one who says we’re old gets put out,” her smile masked nothing. The whole business irritates her.

But why? Old isn’t necessarily a bad thing. Last year the league’s two oldest teams, the Lynx (30.88 years) and Los Angeles (29.53), met for the championship, with the Sparks prevailing in a memorable down-to-the-wire Game 5 that left the Lynx hurting and seething all winter. And this week, WNBA general managers tabbed the Lynx to win it all in their annual preseason poll, just ahead of L.A.

Reeve constantly seeks new ways to motivate her players, hence the preoccupation with slights — real or imagined. Undoubtedly she will ignore the G.M. poll and highlight things like the Associated Press season preview, which picked L.A. But with this group, it’s probably not necessary. The Lynx fell 3.1 seconds short of winning back-to-back WNBA titles and a fourth in six years, and that ought to be incentive enough.

“If we did what we needed to do, we would be the four-time champions,” said Seimone Augustus, who begins her 10th season in Minnesota. “We know what we need to do, and we’re going to do it. That little bitter taste that we tasted last year will give us the motivation that we need.”

Those who follow the Lynx know how fiercely tight-knit and self-driven the core players are. But Augustus, Lindsay Whalen, and Rebekkah Brunson also understand their time with Moore and the Lynx is growing short, and they’ve vowed to do whatever they can to extend it.

Augustus crystalized it eloquently earlier this month: “You get tired of coming back here and hearing how old we are,” she said. “I don’t think any one of us is trying to outrun Father Time. We know the time is ticking. We’re just trying to dance as slowly as possible with him, and enjoy the ride until the music stops. Then we get off.”

The ride comes with financial sacrifice. Women’s basketball players make the bulk of their money overseas in the winter. A superstar like Moore or Diana Taurasi can command up to $1 million, and a lesser name $300,000 to $500,000. That’s much more lucrative than the WNBA, where veterans salaries top out at $113,500, and most players pull in significantly less.

Whalen sat out the 2015-16 winter season to rest her aching legs and prepare for a Team USA pre-Olympic camp. Her injury-free play last summer convinced Augustus, Moore and Brunson to follow her lead and rest this winter. Brunson and Whalen trained in Minneapolis until February, when Brunson joined a team in Turkey for two months to play herself into basketball shape. All looked especially spry in the preseason, at least until Moore missed the last game in Washington with a groin strain.

“Instead of only being able to play at a high level to 35, they’re going, ‘Can I lengthen this thing and play until I’m 38, 39, 40?’” Reeve said. “They’re not going to look like they’re 25 out there. But I’ll tell you what: Give me a smart player every day of the week that takes care of their body, and they can play that long. And it means that much to them, which I think we need to have a great appreciation for.”

Heading into the season, Reeve encouraged Whalen and Augustus to take more 3-pointers instead of driving to the hoop, saving wear and tear on their legs. That’s an especially wise strategy for Whalen. Voted the league’s toughest player by the GMs, Whalen takes a beating inside and rarely gets the calls Reeve thinks she should.

Augustus, a notorious line-drive shooter, said she’s added more arc to her 3-point attempts. “That’s the only part of my game I felt like was the weakest link if anything, my 3-point shooting,” she said. “But it’s not like she wants me to come out and shoot like Maya’s shooting. She just wants me to knock down the open shot. That’s something I feel like I can do. It’s just understanding that I can’t shoot the 3 the same way I shoot my jump shot.”

Reeve also challenged veteran backup guard Jia Perkins to shoot 40 percent from the field, a mark she fell short of the last two seasons. Perkins and fellow backcourt reserve Renee Montgomery usually stay late after practice to shoot, assisted by a Y-shaped machine that catches basketballs and tosses them back out while counting made baskets in a man’s voice that’s a cross between James Earl Jones and Geoffrey Holder. (If you don’t know who they are, Google is your friend.) The point: If Perkins and Montgomery contribute offensively, there’s no need to wear out Whalen, 35, and Augustus, 33. 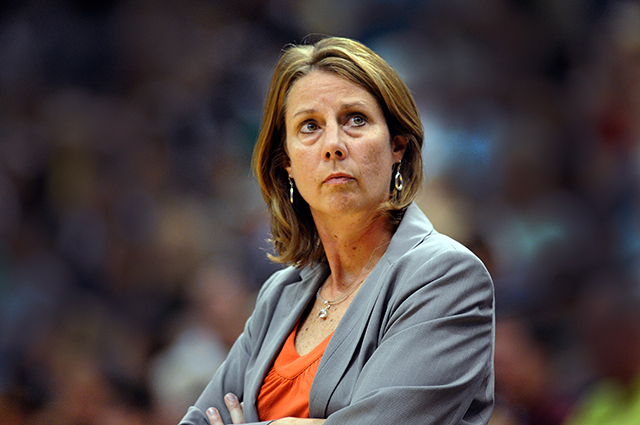 MinnPost file photo by Craig Lassig
Lynx Coach Cheryl Reeve on media day: “The first one who says we’re old gets put out.”

And the Lynx need more aggressive offense from center Sylvia Fowles, who shot 59.5 percent last year (fourth-best in the league) while winning the Defensive Player of the Year Award. Last year Fowles shot 64.6 percent inside of five feet, significant bumps from 2015 (58 percent) and 2014 (58.6 percent). The more Fowles looks to shoot, the more defenses collapse on her, creating open shots for Moore, Augustus and Whalen.

Pierson, 35, is here because the Lynx needed a bruiser to guard L.A. power forward Nneka Ogwumike, the league M.V.P. whom Brunson and Natasha Howard couldn’t handle in the WNBA finals.

Reeve was an assistant coach in Detroit in 2008 when Pierson, then with the Shock, scuffled with Candace Parker of the Sparks, setting off a free-for-all. Pierson took an elbow in the head in practice last week — occupational hazard for anyone who likes to mix it up — and Reeve kept her out of both exhibition games as a precaution.

“I’m definitely the enforcer,” Pierson said. “Any team that I’m on, that’s my role. I love to set screens. I love to hit people in the right manner, legally. I love to get my teammates open and make things easier for them. In turn, it makes it easier for me. It opens up my game… I’m looking forward to setting screens for all these young ladies.”

Moore, for one, loved that. “The first day she said, ‘I love to set screens,’ and I said, ‘You and I will get along great,’” Moore said with a big smile.

So who besides L.A. stands in Minnesota’s way? Defensive-minded New York and Tina Charles, for one. Lynx rival Phoenix replaced its entire roster except Taurasi and Brittney Griner. And no one should discount Washington, which added Elene Della Donne and Kristi Toliver in the off-season.

Local interest in the Lynx encouraged Fox Sports North to televise 17 games this season, the most ever, up from eight last year and nine the year before. Add ESPN2’s seven national telecasts, and Lynx fans can watch 24 of the 34 regular-season games on TV.

“It’s something we’ve been asking for, and we’re happy to finally see it,” Reeve said. “With women, you have to be overqualified for something like this. I would say our team is overqualified, and it’s due time.”

The deal is a financial risk for FSN, which hasn’t added any additional sponsors. “The hope is to show potential sponsors what a great product it is,” said FSN senior vice president Mike Dimond.

Even if the Lynx are ol…well, never mind.