It’s crazy on the face of it. What pro basketball team hires a 5-foot-8 former EuroLeague guard to coach centers and power forwards?

It’s especially comical to watch that Lynx assistant coach, James Wade, break out two oddly shaped pads for a defensive drill with 6-foot-6 center Sylvia Fowles, one of the WNBA’s most dominant low-post players. Wade whacks Fowles with one pad while holding another, a foam cylinder on a stick, high above her.

Wade calls it “gladiator mode,” which is about right by the looks of it. Defenders rough up Fowles every night, and the drill simulates contact from someone bigger and nastier than Wade. Not that Wade can’t be nasty himself. “I can be as physical as she allows me to be,” Wade said.

Just to keep it interesting, Wade throws in a little trash-talking.

“If he gets a stop, it’s like the whole practice, he’ll talk about how he got a stop,” Fowles said. “I try not to let his hopes get up too high. He’s one of the most trash-talking coaches I’ve ever had, but it’s in a good way. I feed off his energy and I don’t pay him no mind.”

Wade knows the drill makes him look silly. But what else is he supposed to do? He can’t copy Jim Petersen, the 6-foot-10 former NBA center and revered Lynx associate head coach who worked with the post players until resigning last January. Petersen pushed Fowles around with a big pad too, but his reach came naturally. No props necessary.

Lynx head coach Cheryl Reeve wasn’t concerned with wingspan when she hired Wade, a former San Antonio Stars assistant, for his scouting and teaching acumen. Petersen helped Fowles build confidence and consistency after her 2015 trade from Chicago, and that upward climb has continued under Wade.

On Tuesday night, the Lynx will badly need Fowles’ inside presence in Game 1 of the WNBA semifinals against the Washington Mystics, a game being played at a temporarily air-conditioned Williams Arena. (Why Williams instead of Xcel Energy Center? Because the Wild open training camp this week.) When the league finally gets around to announcing Fowles as the league’s Most Valuable Player — probably before Game 2 on Thursday night — expect Fowles to praise Wade for their collaboration. And Reeve to nod affirmatively.

“I don’t think because you are 6-6 or 6-8 or 6-10 or played the post makes you a great post coach,” Reeve said. “There are some that are terrible coaches. They can’t teach the game.

“What makes James so special has nothing to do with height. It’s his attention to detail, his ability to break something down and teach it. I think James is a tremendous teacher through the use of video. On the court, it’s his approach — his ability to visualize how to set up a drill, to create game-like situations, to make those skill workouts really valuable.” 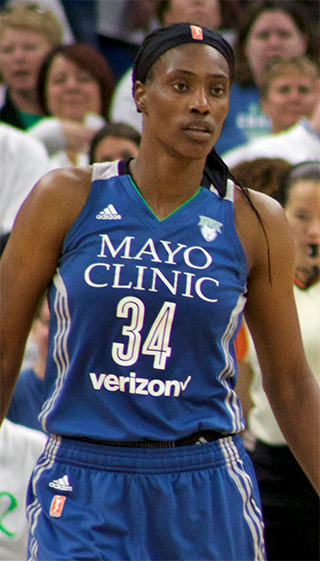 Until her scoring dropped off the last few games, Fowles challenged for the league lead in multiple offensive and defensive categories. She finished fifth in scoring at 18.9 points per game, second in rebounding and blocks, and tops in field goal percentage with a career high 65.5 percent. Fowles’ player efficiency rating of 30.92 — that’s a metric melding positive and negative stats and skewed toward big scorers — ranked her season 11th best in WNBA history.

She did it while facing double or triple teams almost every night, and persevering through two injuries the Lynx kept quiet — a wrenched right shoulder the first two weeks, and a non-displaced broken nose from May 28 through much of June. “I’m a pretty tough cookie,” said Fowles, who never missed a game.

“I don’t know what the schemes are for the other teams, but it looks like, ‘Beat the hell out of Syl and hope that she misses shots,’” said Seimone Augustus, Fowles’s friend since their college days at LSU. “It wears on her mentally and physical. Just to see her push her through 34 games and have to deal with that the entire season, I don’t know any other player that could have done that and be as successful as she was.”

The defensive attention seemed to rattle Fowles only once, in an August 20 loss at New York, when the Lynx were missing Lindsay Whalen (broken bone, left hand) and Rebekkah Brunson (sprained left ankle). Liberty Coach Bill Laimbeer rolled extra defenders at Fowles from all sides to confuse her. Fowles took only four shots and scored seven points, though she grabbed a season-high 15 rebounds. It came in the middle of that 4-5 funk without Whalen that jeopardized the Lynx’s hold on the No. 1 playoff seed.

“It would make sense that you were rocking and rolling and you’re 20-2, and all of a sudden you’re 4-5 and you kind of go, that must have been Lindsay that was running this thing,” Reeve said. “But honestly, there were probably a lot of factors.

“We thought it was going to be a tough stretch for our team even if we were healthy. I don’t know what our record would have been if Lindsay was out there, but it suspect it was going to be a tough stretch either way. We certainly felt like we were a little bit out of synch in the first few games. I think if Syl plays well in all those games, it probably doesn’t matter who the point guard is. And that didn’t happen.”

Lately Wade encouraged Fowles to attack the basket instead of reacting to the defense, and dishing more often to open teammates. Fowles wasn’t as otherworldly as she had been, but she helped the Lynx win their final three games to secure home court throughout the playoffs. And she picked up five assists each in the last two games, matching her career high.

Now the Lynx are whole again. Whalen, who missed 12 games, is back at practice, even if Reeve isn’t sure what Whalen can give her. But anyone who remembers Whalen returning from a broken right hand to spark the Gophers to the 2004 Final Four knows never to put anything past her, even at age 35. Either way, for the Lynx to win their fourth WNBA title in seven years, Fowles — now the focal point of the offense — probably needs to excel like she did in the 2015 Finals. And that starts Tuesday night, facing a Mystics team with 2015 MVP Elena Della Donne and 3-point threat Kristi Toliver.

“Playing with anyone who is dominating is truly not hard,” said Maya Moore, the 2014 MVP who has often been that player herself. “It’s usually great. But teams are smart. They make adjustments and try different things. Towards the end here, recognizing how teams are trying to combat her greatness to where we can still take advantage of all of our weapons, was one of the things we had to clean up and figure out.

“You have to figure out the way to be the best with what you have, and we have a lot. Just because we have a lot doesn’t mean it’s automatically going to happen, though. Our coaches help a lot. We understand what we need to do when we see certain schemes. We’re confident we can make the right decisions and the right reads when Syl draws as much attention as she does.”