This weekend, the Twin Cities will paint it purple to celebrate the Vikings’ first real shot at getting to the Super Bowl in years — and the chance to be the first team in NFL history to play in the championship game on home turf.

Lots of landmarks have been getting into the Vikings spirit of late, from the I-35W bridge to the the IDS Center, the Federal Reserve Bank of Minneapolis, Nicollet Mall, the Lowry Avenue Bridge, the Mall of America, the now-re-lit Grain Belt sign and Target’s headquarters.

As you might have noticed, this is a fairly regular occurrence — whether it’s red, white and blue for the Fourth of July, maroon and gold for the Gophers, or rainbow colors for Twin Cities Pride.

Whether you knew it or not, there are actually protocols that dictate when and how some Twin Cities landmarks — particularly the public ones — are lit.

Perhaps the most striking lit-up landmark is the I-35W bridge, spanning the Mississippi east of downtown Minneapolis. Starting this afternoon, the 607 LED light fixtures on the bridge’s span will be lit up Vikings purple for the weekend, while the 32 on its piers will go gold, said Steve Misgen, a district traffic engineer for the Minnesota Department of Transportation’s metro district traffic office. The lights, which were just replaced, are controlled at MnDOT’s facility in Roseville.

It’s not just any occasion that gets this treatment. There are calendars that dictate when the 35W Bridge (and the Lowry Avenue Bridge, under Hennepin County’s jurisdiction) diverge from their default blue hues.

Both MnDOT and the county take requests to light up the bridges in specific colors, but the requests aren’t always granted. The authority to grant or deny requests for 35W rests with the Minneapolis city council (due to a policy change, it’ll be MnDOT’s soon, though, Misgen said) and with the county administrator in the case of the Lowry bridge.

Generally, it has to be an event of regional or national significance — like Breast Cancer Awareness day — in order for a request to be entertained.

“We won’t do it for your birthday or your wedding,” Misgen said. 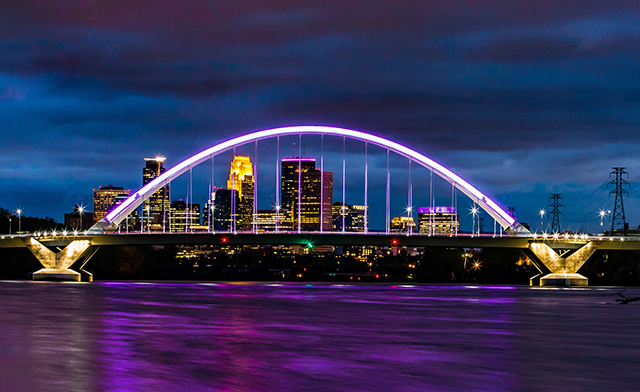 Creative Commons/Tony Webster
The authority to grant or deny requests for the Lowry Avenue Bridge rests with the county administrator.

The lights can be lit up nearly any color. Does that mean the bridge will be lit in mourning somehow if the Vikings lose?

We don’t want to talk about the Vikings losing, but Misgen said the answer is no — dark colors aren’t as visible.

When it comes to public displays of pigmentation, bridges aren’t the only light-up facility in the Twin Cities. The IDS Center can change hues, and the First National Bank Building in St. Paul recently got an upgrade, allowing it to change color, among others.

The newest light-up landmark in Minneapolis is the Grain Belt sign looking over the river from Nicollet Island, which was bought by August Schell Brewing Company (which owns Grain Belt) in 2016. Outfitted with 1,107 LED lights that spell out “Grain Belt beer” and LED tubes that illuminate the outline of a bottle cap, the sign was re-lit after being dark for years on December 30. MinnPost photo by Greta Kaul
The newest light-up landmark in Minneapolis is the Grain Belt sign.

Schell’s president Ted Marti said that because it’s a historic landmark, there are only certain times the company’s permitted to deviate from the classic Grain Belt colors — red, gold and green. One of them is when a local team is in a championship game. Others include holidays like the Fourth of July and St. Patrick’s Day.

The Vikings aren’t quite to the Super Bowl yet, but with calls for the city to be bathed in purple light, Schell’s obliged.

Paint the town purple: who decides how and when to change the light colors on Minneapolis’ bridges