Their time together with the Lynx is growing short, and already they are thinking about what’s next. Seimone Augustus spent two months in a special Harvard Business School program for WNBA players, focusing on fashion design and merchandising. Lindsay Whalen dabbled in broadcasting and landed a side hustle you may have heard about. Rebekkah Brunson manages a foundation she started before coming to the Lynx, and always looks to do more.

Augustus demonstrated the point last Saturday in the new Lynx locker room at Target Center, a large, circular space that’s 50 times better appointed than the grubby side room they used for years. After a 87-58 rout of Chicago in their final exhibition game, Augustus, who has been with the Lynx longer than anyone (since 2006), sat at her locker and raised her left hand. The spacing of her thumb and forefinger, less than an inch apart, indicated how close they are to end of their careers.

“Some of us are like right there,” she said, “one step away.”

They keep playing because they they’re still good, and because they enjoy being around Coach Cheryl Reeve and each other. Maya Moore frequently invites teammates over for pancakes. Sylvia Fowles fashioned a basket as a baby gift for assistant trainer Kate Taber, using a Hobby Lobby gift card Augustus bought her. Only in a group this tight-knit could Fowles, the reigning league and Finals MVP, get away with this crack: “It’s definitely a sisterhood here, with Reeve being the grandmother.”

And listening to Augustus, at Wednesday’s Media Day, describe how Whalen’s clothing tips off her schedule as the new women’s basketball coach at the University of Minnesota was endearing, delightful and priceless.

“It’s a little weird to see your sister kind of make her way off into the real world,” Augustus said slowly. Everyone laughed, and her Cajun-inflected voice sped up to fast-break pace.

“Even last night, we went to Mr. Taylor’s house” — the team’s annual preseason dinner at owner Glen Taylor’s farm in North Mankato — “and she’s on the phone talking to AAU coaches and coaches trying to get their players recruited. She’s wheeling and dealing and I’m overhearing conversations, and she’s really good. I’m not saying I thought she would be bad, but I just didn’t expect the level of professionalism. The U of M, watch out. Whalen’s working extremely hard to build a really good program.” 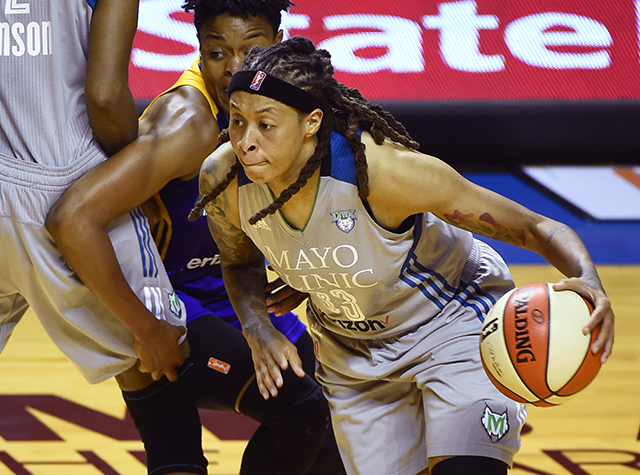 MinnPost file photo by Craig Lassig
Seimone Augustus on Lindsay Whalen: “It’s a little weird to see your sister kind of make her way off into the real world.”

It’s probably not a coincidence that the contracts of Whalen and Brunson, both 36, and Augustus, 34, expire after this season. Reeve, now also the general manager, promised all three they will retire as Lynx unless they request a trade, and it’s hard to imagine any of them finishing elsewhere. The Louisiana-born Augustus said years ago she thought about playing closer to home, San Antonio or Atlanta, until Brunson, Whalen, Reeve and Moore arrived. With four WNBA championships and six finals appearances in seven years — and counting — Augustus is glad she stayed.

The only thing that eluded this group is winning back-to-back championships, last done in the WNBA by the 2001-02 Los Angeles Sparks. This season the Lynx get a fourth shot at it after falling short in 2012, 2014 and 2016. Sunday’s season opener against the Sparks at the Target Center could tell a lot about how Reeve’s more heavily guard-oriented roster matches up against the Nneka Ogwumike and Candace Parker-led team they faced in classic, five-game Finals the last two years.

Reeve did not expect this much roster upheaval. Forward Plenette Pierson and guard Jia Perkins retired as expected. But Renee Montgomery, who two years ago turned down an offer to start in New York to remain with the Lynx as Whalen’s backup, chose free agency this time, signing with Atlanta. And Reeve traded backup forward Natasha Howard, a restricted free agent, to Seattle when they couldn’t agree on contract terms.

“There were times when we wondered, do we need to get younger? Did we need to move on from Renee and keep AJ?” said Reeve, meaning promising second-year guard Alexis Jones. “It was a real decision for us, because our (salary) cap was taking a pretty big hit with what we had, and then Natasha Howard moving from a rookie scale contract to wanting to get paid. So now we had some hard decisions to make. The decision was made for us.” 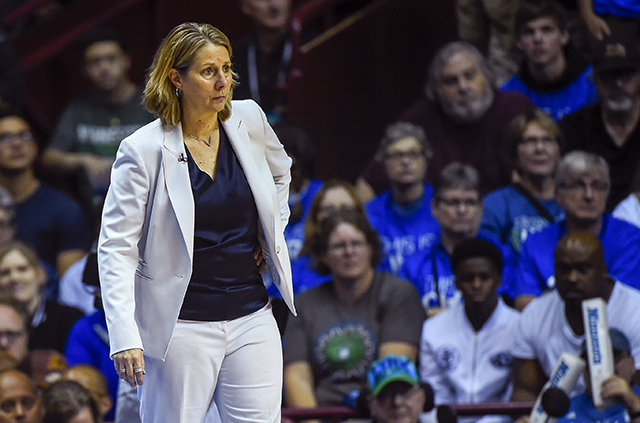 MinnPost file photo by Craig Lassig
Coach Cheryl Reeve: “We might be very guard-heavy in terms of where our talent lies. That’s OK. That’s a fun way to play.”

The Lynx heard Tanisha Wright, the five-time WNBA All-Defensive first-teamer turned assistant coach at North Carolina-Charlotte, wanted back in the league after sitting out last season. Reeve called the hard-nosed Wright a “must-have,” even if Montgomery stayed — basically giving them their Alana Beard, a primo defender. Wright had other offers but chose the Lynx after Taylor, in a phone conversation, promised a two-year contract.

“Being 13 years in, I understand it’s a business,” said Wright, 34. “But I wanted the assurance that if I commit to this organization, they commit to me. I wanted to be able to be somewhere. I don’t want to jump around. I’m too old for that.”

Reeve expects Wright to lead the second unit and tutor Jones, who saw meaningful minutes in the playoffs as a rookie. “I told AJ this: When you’re not doing what you’re supposed to be doing, she’s going to grab you by the shirt, and you’re going to listen to her,” Reeve said. “Don’t get caught up in it. This isn’t personal. This is someone who is going to teach you how to play.”

Jones understands. “I told Tanisha she’s going to love me by the end of the year,” she said.

It was Phoenix, the Lynx’s original championship rival, that approached Reeve about acquiring speedy three-time All-Star guard Danielle Robinson. (If you were surprised to see the Mercury deal with the Lynx at all, so was Reeve.) Robinson, probably the fastest player in the league, felt unsure of her role with the Mercury. Here, she will be asked to defend and push the pace. Fowles calls her “Lightning” to her “Thunder.”

The Lynx aren’t as deep up front, where free agent veteran Lynetta Kizer will primarily back up Fowles and Brunson. So Moore will see time at power forward, with Augustus occasionally shifting to small forward. Fowles needs to match her 2017 dominance inside, and Moore to play as well all season as she finished last year. Expect Reeve to monitor her veterans’ minutes even more closely with the condensed regular season to accommodate September’s FIBA World Cup in Spain. The Lynx will play 34 games in 92 days instead of 113, leaving less practice and recovery time.

“We might be very guard-heavy in terms of where our talent lies,” Reeve said. “That’s OK. That’s a fun way to play. We’ll be challenged in some areas for sure. Any time you play a little bit smaller in size lineup, whatever disadvantages you have at one end, you probably have some advantages at the other. The disadvantages shouldn’t scare you from wanting to take advantage of this end down here. We’ll have to see how that plays out.”