On Sunday mornings, Zoe Holloman packs up her bathing suit, nose plugs, and swim cap and heads to the pool.

Holloman is a member of The Subversive Sirens, a Minnesota synchronized swim team that’s preparing for its first-ever competition at the 2018 Gay Games in Paris this summer. Each week, the five-person team clocks countless hours practicing and perfecting their routine on dry land and in the water.

Holloman strides onto the pool deck wearing a black bathing suit and flip-flops. Prince’s familiar voice cuts through the tinny sound of synthesizers as she assumes her position in a formation next to her teammates.

The group’s choreography is set to a medley of Prince songs, including “Let’s Go Crazy,” and as the tempo picks up, Holloman and the other swimmers slice the air with their arms and maneuver their bodies into star-based formations.

In the summer of 2014, Signe Harriday traveled to Cleveland, Ohio to attend the Gay Games with her girlfriend. She was blown away by the experience. The Gay Games started in 1982 and have grown into a ten-day celebration that draws thousands of spectators and athletes from more than 70 countries. Harriday loved being in a space where people from all over the world were “gloriously rambunctiously and beautifully out.” But Harriday wanted to do more than cheer from the sidelines. She wanted to get in on the competition. To make that happen, she needed a sport. And teammates.

When Harriday’s friend and fellow theater artist Suzy Messerole learned that the 2018 Gay Games were being held in Paris, she was convinced to sign up. Together they landed on synchronized swimming as their pathway into competitive athleticism. “I used to create synchro pieces in my town of 800 at the community pool,” says Messerole. “So we figured, why not?”

Harriday had attended synchronized swim camp for a week in elementary school, but that was back in the 1980s. “Before we got into synchro we knew nothing,” says Harriday. “We knew it was awesome, but the technical how-to — that was a little elusive.”

Even so, Harriday and Messerole were soon attracting other teammates into their mermaid tribe, including Tana Hargest, who describes herself as the “newbie” of the group in terms of synchro experience. Hargest’s fascination with synchronized swimming grew out of her love of mid-century Esther Williams films. But until the Subversive Sirens came along, she never imagined becoming a serious aquatic competitor. 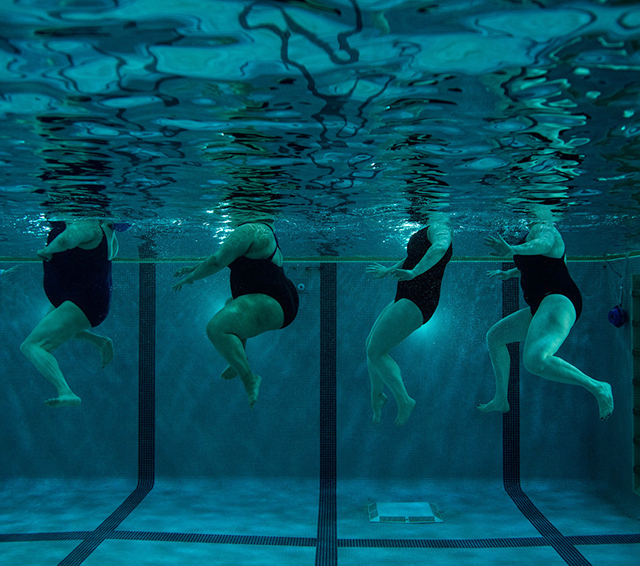 “I’m 48,” says Hargest. “Had you asked me at the time, when most synchronized swimmers start in their childhood or teens, if I was going to be a Subversive Siren, I probably would have said no,” she says.

Since joining the team, Hargest has doubled down on her training, incorporating Pilates and other strength-based exercises into her regimen, in addition to multiple weekly workouts at the pool. She’s also embracing a newfound identity as an athlete. “It’s powerful to be occupying this black body that’s this shape and takes up this space in this world and say: ‘I’m a competitive athlete,’” she says.

For Hargest, becoming a Siren has been life-changing in other ways, too. “I’ve suffered from depression for most of my life… It’s definitely worse in the winter… If I didn’t have to show up and be in the pool and be accountable, I wouldn’t have left my home for a good stretch of December,” she says. “It saved my life this winter. Hopefully, it will continue to do that.”

Its own kind of revolutionary act

While the Subversive Sirens are serious about mastering their technique and polishing their routine, they have a bigger purpose beyond competing at the Gay Games. The racially diverse and mostly queer-identified team share a commitment to black liberation, equity, queer visibility, and body positivity that’s baked into their mission statement.

In their lives outside of the water, many of the Sirens are involved in activism and social justice organizing. They see their time together at the pool as a necessary, joy-filled complement to these efforts.

“It’s something that women of color don’t often do is take the time to put yourself first,” says Holloman. “It has given me the habit of giving myself permission to invest in myself.”

The group’s mix of artistry, playfulness, and activism is inspiring others to follow their siren song. An estimated 25-30 fans will be traveling from Minnesota to Paris this August to cheer them on.

At first, the group considered using the team as a platform for raising money or awareness for a cause or something bigger than themselves. But then they realized that focusing on themselves was its own kind of revolutionary act. “It feels selfish in the best way,” says Hargest who, for her part, hasn’t ruled out the possibility of coming home with a medal.