Ever so briefly, Maya Moore offered a glimpse of what it’s like to be The Superstar Maya Moore, and the weight of expectations that come with it.

It was after a game in late June. The Lynx had beaten Seattle impressively at the Target Center, the fifth victory in a seven-game winning streak that proved the high point of a difficult, championship-less season. Moore sat at her locker reflecting on the 3-6 start that left Lynx fans apoplectic over the apparent collapse of the dynasty before their eyes. Moore couldn’t know it then — none of us did — but this was as good as it would get.

“This is our new normal,” Moore said. Then she laughed softly, in an I-can’t-believe-I’m-going-to-say-this-but-it’s-true-so-why-not kind of way. “Our normal,” she said, “is so hard.”

Months before, Moore made a similar observation to Coach Cheryl Reeve, who understood. Not since the 1950s Minneapolis Lakers has a major professional franchise in these parts made greatness appear so routine. Six WNBA finals appearances in seven years, with four championships and nearly a fifth, conditioned Lynx fans to expect a parade every year. So did the Lynx themselves. And Moore, the ultimate winner with a run of championships dating back to high school, played with so much passion and effectiveness it seemed like she could do it forever.

Reeve likes to say every season is different, even with the same group of players. Different challenges, different dynamics. As this season went along, condensed to accommodate the FIBA World Cup tournament in late September, certain problems lingered that the Lynx usually smoothed out on the fly. Too many turnovers. Shaky foul shooting. Repeated defensive breakdowns by normally reliable defenders. A surprisingly spotty offense. Injuries, including one to Sylvia Fowles’ left elbow that the Lynx never revealed until Friday. And, most surprisingly, Moore’s up-and-down play.

Outside of that seven-game winning streak, when she scored at least 20 points in every game, Moore struggled as often as she dominated. Yes, she was the All-Star Game MVP. Yes, she led the Lynx in scoring, averaging 18.0 points per game. But all her shooting percentages — overall, 3-point and free throw — were down from 2017. Her overall 42.3 percent shooting was the second-worst of her career.

Her offensive and defensive ratings, measures of points produced and allowed per 100 possessions, fell off as well, per WNBA.com. Her offensive rating dropped ten points from 2017, while her defensive rating rose to a career-worst 96.6. And her player efficiency rating, a complicated formula that tries to measure overall performance, dropped for the fourth consecutive year, to a career low 19.7, per basketball-reference.com; the league average is 15.

Reeve said the condensed schedule hurt players throughout the league, not just Moore. Predictably, Moore offered no excuses. “Different stretches of the season, some games you just felt the fatigue, and it didn’t feel good to feel that way,” Moore said Friday at the club’s Mayo Clinic Square practice facility. “Other games, it felt a lot better. You just try to get into a rhythm and try to perform the best you can.”

Not that it was all on her. In a big offensive year for the league, six times the Lynx failed to score 70 points; they lost all six games. In their run of greatness from 2011-17, the Lynx never lost more than four games at home in a season; this year they were 9-8. There were nights when reigning league MVP Fowles couldn’t make a layup, others where nobody could make a jumper, and too many in which quick guards blew past stationary Lynx defenders. The fourth quarter of Tuesday’s first round playoff loss in Los Angeles, with Chelsea Gray of the Sparks swishing shot after shot while Moore went scoreless, offered a telling snapshot of the season. 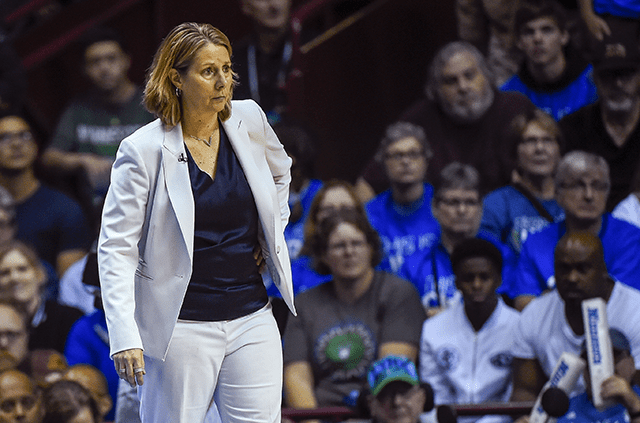 MinnPost photo by Craig Lassig
Coach Cheryl Reeve: “We have a lot of work to do.”

So what now? Lindsay Whalen’s retirement gives the Lynx payroll flexibility to retool, and they will have more if Rebekkah Brunson also retires. Seimone Augustus said Friday she will probably return. Brunson isn’t sure. Either way, the dynasty as we know it is over. The league has changed, with a greater emphasis on 3-point shooting, and the Lynx need to adapt to stay relevant. They need better scoring and defense on the perimeter, and more ruggedness inside.

Reeve, who is also the Lynx general manager, has a few ways to go here. The club’s winning culture and state-of-the-art practice facility make it an attractive free agent destination. That helps. The Lynx hold the sixth pick in what figures to be a deep college draft, their highest since taking Dev Peters No. 3 overall in 2012. At that spot they can land a player, not a project. Trades are possible, too.

“We have a lot of work to do,” Reeve said. “We’re in a place we haven’t been since probably 2010, maybe even before that. It’s a little bit different than other leagues regarding free agency. It’s not like the pool is really deep, with places you can go to to fill those needs. It’s not going to be easy to do.”

Here’s what has to happen:

Maya needs to get back to being Maya: Moore struggled this year like she’s never struggled before. If she’s healthy, and the burden of being Maya Moore sent her into decline at age 29, the Lynx are in big trouble. No one really believes that. Chances are Moore will figure out what she needs to do and return with renewed purpose. Friday she announced she will skip the winter overseas to rest, a concession Augustus and Whalen made in recent years to better prepare for the WNBA grind. A rested, effective Moore lessens the burden on Fowles and everyone around them.

Fowles, too, decided against playing overseas even before hyperextending her left elbow in practice about a week-and-a-half before the All-Star Game. “I continued to play because I’m just that stubborn,” she said. By the end of the season, the ulnar collateral ligament ruptured. Surgery remains an option if it doesn’t heal with rest. Now she wishes she hadn’t played overseas last winter.

Find more balance: Offense, defense, rebounding…It can’t all be on Fowles and Moore. Augustus can still score and pass, but her days as Reeve’s shutdown defender are long over. At crunchtime Tuesday night with Gray rolling, Reeve kept Augustus on the bench rather than put her out there with Whalen, who can’t guard anyone with quickness either.

Losing valuable reserves Renee Montgomery (to Atlanta in free agency), Natasha Howard (sign-and-trade to Seattle), Jia Perkins and Plenette Pierson (both retired) hurt the Lynx more than they expected. Montgomery and Howard thrived with their new teams, while the veterans Reeve brought in to replace them — guards Danielle Robinson and Tanisha Wright, plus rugged forward Lynetta Kizer — were a mixed bag. Robinson was just getting the hang of the offense when she wrecked her left ankle and needed season-ending surgery. Wright, after sitting out 2017, made a greater impact in the locker room than on the court. Reeve released Kizer in July. 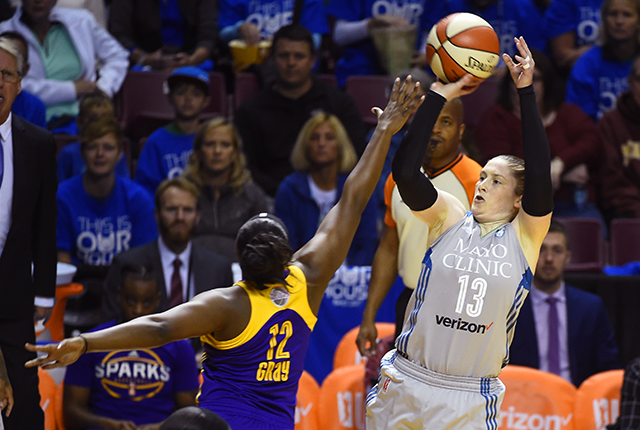 Certainly, expect the Lynx to add one or more 3-point shooters via trade or free agency. For what it’s worth: Former U of Minnesota great Rachel Banham has one year left on her rookie contract with Connecticut and shot 37 percent on 3-pointers off the bench. Just sayin’.

Improve from within: Whalen has been Reeve’s security blanket and the guts and glue of the operation, impossible to replace at point guard. Robinson, provided she is healthy — Reeve said her ankle needs four to six months to heal — will get first crack at it. Reeve prefers veterans to young players, but sooner or later she needs to put Alexis Jones out there to succeed or fail. Jones lost playing time because Whalen and Robinson ran the offense more efficiently.

Developing forwards Temi Fagbenle and Cecilia Zandalasini had their moments, with Zandalasini showing a nice perimeter touch and Fagbenle poise and grit. Both benefited from a lack of depth up front. Reeve started Zandalasini at small forward the last six games and again in the playoffs to extend defenses and open more room for Fowles down low. That helped the offense but not the defense, where the 22-year-old Zandalasini was too often overmatched. Those two, and Jones, can carve more playing time by defending better.

The Lynx’s dynasty is over. So where does the team go from here?