Meetings of the Minnesota House of Representatives Rules Committee are often tedious affairs.

It’s where bills are scheduled for floor action, where chamber rules are approved and where administrative functions of the House are handled. The majority party rules the Rules Committee — and doesn’t lose.

But a gathering of the committee Wednesday was noteworthy, less for its agenda than for its format — and for a technical glitch that made for some interesting reading for anyone paying attention to the meeting’s closed captioning. As in, who knew that Farmington was represented in the House by “Rep. Then The Grass Along”?

Historic, but not precedent-setting

For the first time, a Minnesota legislative committee met and voted via conference call with members taking part from their home districts. The format is in response to the COVID-19 crisis, which has disrupted normal operations of the Legislature as it has for other businesses across Minnesota. The process resulted from a rule change that was approved during last week’s one-day session, which itself was a break from the COVID-forced recess that began March 17.

House Majority Leader Ryan Winkler has defended the process that was used to prepare the Legislature’s COVID-19 response bill for last Thursday’s session, in which groupings of committee members met via conference call to craft sections of the bill. In order to stay within the open meetings law that covers the Legislature, the committee members broke up by party — the same types of caucus meetings permitted by the law even when the majority caucus contains a quorum of the House.

Only after lawmakers agreed on the provision in the bill did the House release a schedule of meetings that had already taken place. There were no minutes kept, no recordings made. The Senate was even less transparent, never really saying how it agreed on its version of the bill. Only during the debate over the bill did individual members reference conversations they had been involved with about it over the previous week. 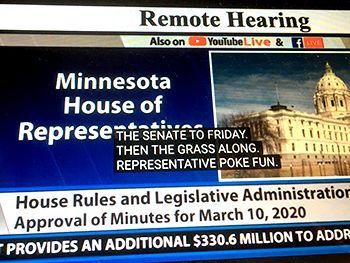 On Wednesday, Winkler, a Golden Valley DFLer who is also chair of the Rules Committee, said the conference-calls meetings were to be used only during an emergency and noted that the rule change approved last week sunsets next January. “I do this work in this manner with great reluctance, but see no alternative,” he said. “We have to keep staff and legislators safe and health during this pandemic. We need to continue doing the work of the public. And we need to do so in an open and transparent manner as far as we can.”

He said the Rules Committee meeting was a test, and that a similar format will be used by other committees. “It bears repeating that we are only doing this because we are under extreme circumstances,” Winkler said. “This is not precedent-setting but it is a historic moment.”

A routine meeting. Sort of …

Winkler led the call and showed the awkwardness it caused at the very start. “The committee staff has informed me that a quorum is present,” he said. 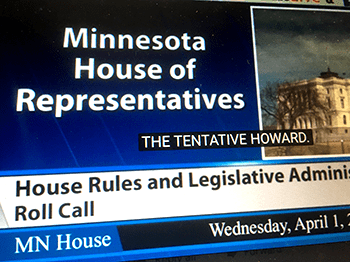 The meeting itself was routine, with reports on human resources changes for the House to allow working from home and expanded sick leave rules. The committee also heard a staff description of the conference-calls process and a plan to employ video conferencing soon (the Senate will use Zoom for a meeting of a new working group to consider legislation during the current recess). One person testified. Questions from committee members were supposed to be sent to House staff via email for Winkler to ask. There were none.

Aside from holding it via conference call, there was another aspect that also wasn’t routine. A glitch with the closed captioning system struggled to translate the meeting, especially the names of committee members during two roll calls. And so: Rep. Pat Garofalo of Farmington became “Then The Grass Along,” Rep. Mike Howard of Richfield became “The Tentative Howard,” Rep. Lyndon Carlson of Crystal was “Representative Karl Can,” Representative Hodan Hassan of Minneapolis came up as “Representative Poke Fun.” and Rep. Gene Pelowski of Winona was displayed as “Representative Pull Out Game.”

Unfortunately, the closed captioning is not contained in the audio-video record of the meeting on the House website.