Minnesota Gov. Tim Walz announced a slate of new restrictions on public life Tuesday, including new limits on how late bars and restaurants can stay open and how many people can attend gatherings like wedding receptions or Thanksgiving dinner.

The new limits are an attempt to curb the spread of a coronavirus pandemic that has already killed 2,698 Minnesotans even as the state is on pace for its deadliest month yet. The number of cases has increased dramatically in October and November, fueled in part by outbreaks outside the Twin Cities metro area.

“We are in the midst of a significant surge in coronavirus cases,” Walz said. “I wish I could tell you that this was unexpected, but it was not.”

Walz for weeks said he did not want to implement new restrictions because of the toll such regulations could take on the state’s already precarious economy. Minnesota has been relatively lax in regulations compared to other states throughout the pandemic. Minnesota Republicans, some Democrats and business groups have also pressured the governor to resist actions that could hamper businesses.

Still, Walz said Tuesday that new restrictions are one way to limit the spread of disease as vaccines under development inch closer to reality. New regulations are needed, Walz said, while the health care system shows signs of strain and people fail to broadly follow voluntary guidance on wearing masks and social distancing. Between June and November, 71 percent of COVID-19 outbreaks were tied to social settings like informal gatherings, restaurants and weddings, according to the Minnesota Department of Health. 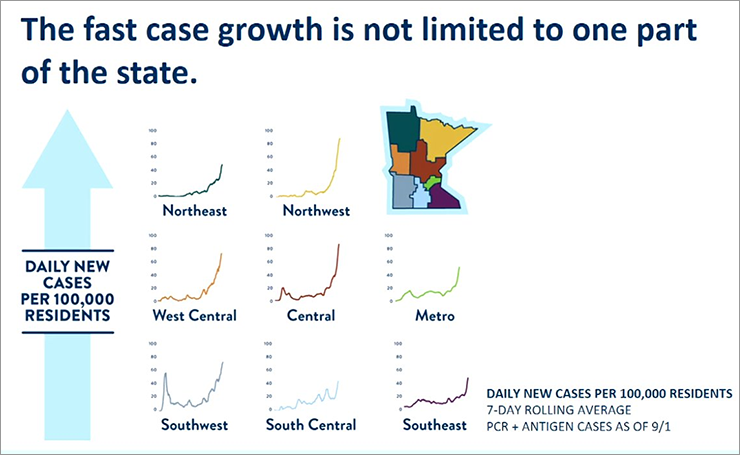 Walz also announced the state will put $10 million toward a grant program for small businesses that have already applied for the program in the past.

Here’s what we know about the new restrictions and the reaction to Walz’s announcement:

For Bars and Restaurants:

Bars and restaurants must close in-person food and drink service between 10 p.m. and 4 a.m. starting on Friday evening, though takeout and delivery is still allowed during those restricted hours. The state says people can’t sit at bar or restaurant counters or order food and drinks there. A business that only has counter service can serve people there if patrons wear masks and sit at a table.

The state will also ban “standing” bar games like pool and darts. 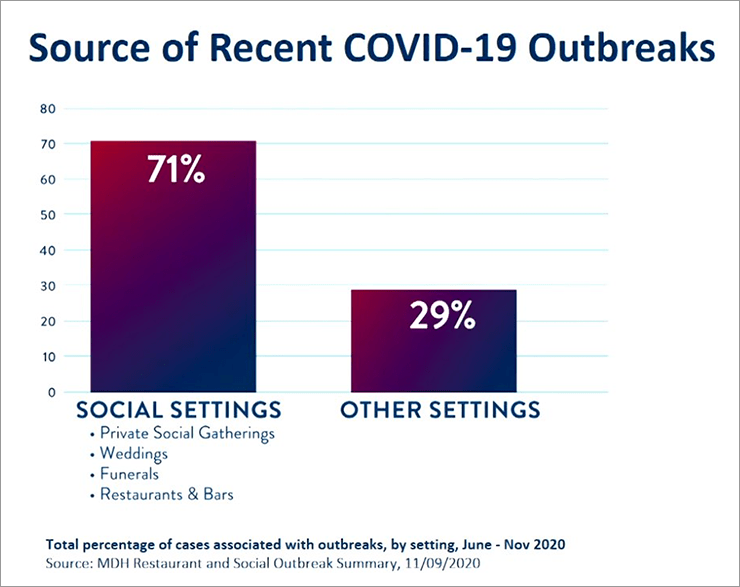 Minnesota is limiting the maximum number of people at restaurants, bars and similar service businesses to 150 people including outside and inside seating combined. Still, bars and restaurants can’t exceed 50 percent capacity as determined by the fire marshal indoors, even if that number is smaller than 150 people. The previous maximum limit was 250 people indoors.

The 10 p.m. deadline for serving food and drinks also applies to outdoor venues like racetracks, mini-golf and amusement parks, as well as indoor venues like theaters, museums and arcades.

Existing restrictions said social gatherings were limited to 25 people outside and 10 inside. Starting 10 p.m. Friday, such gatherings will be restricted to 10 people, regardless of whether it is held outdoors or indoors. A gathering also can’t include people from more than three households.

Walz said the state is “not going into someone’s home and arresting them on Thanksgiving,” however. Compliance will rely simply on people following the rules. 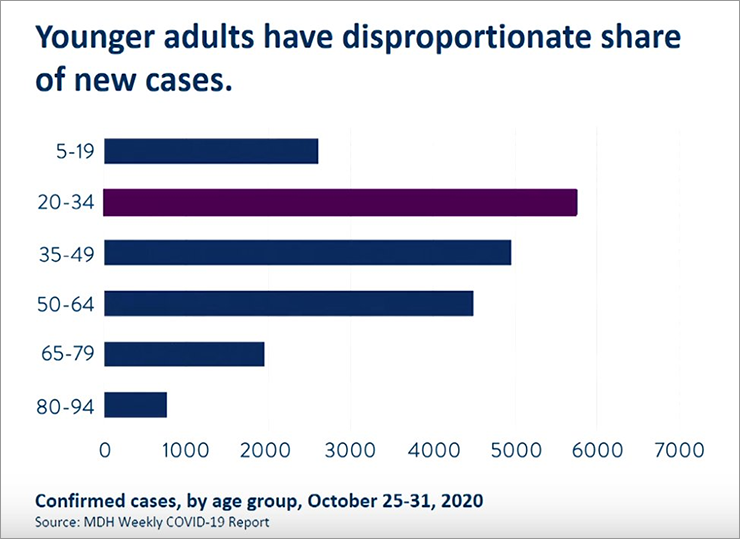 For wedding and funeral receptions:

A limit of people who can attend receptions for weddings, funerals and similar events is being dropped to 25, though that restriction will be phased in over a period of weeks to mitigate disruption to pre-planned events.

Starting Friday, venues that host such receptions or events can’t operate between 10 p.m. and 4 a.m. Beginning Nov. 27, those venues can only have 50 people. Starting Dec. 11, that limit will be reduced to 25 people.

Walz said there will be no change to rules for wedding or funeral ceremonies themselves, since he said it’s the reception or party after such events where COVID-19 spread has been riskier. 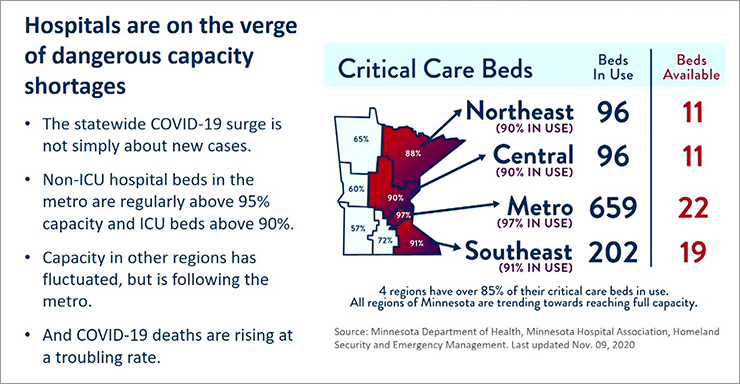 What the reaction has been:

Marilyn Peitso, president of the Minnesota Medical Association, which represents physicians, residents and medical students, said in a statement that Walz’s new rules were “needed action” that will “help slow the spread of the COVID-19 pandemic and protect the health and lives of all Minnesotans.”

“We are seeing, firsthand, the rapid spike in COVID-19 cases,” Peitso said. “These are not just statistics, but rather these are our patients, health care professionals, our teachers, our family members, our fellow Minnesotans.”

Minnesota House Minority Leader Kurt Daudt, R-Crown, said the restrictions “are another hit to Minnesota bars and restaurants, many of whom have been doing everything the right way to protect the health and safety of their guests and employees.”

State Sen. Michelle Benson, a Ham Lake Republican who chairs the Senate’s Health and Human Services Finance and Policy Committee, accused Walz of using two different standards to restrict bars but keep some elementary schools closed, even though schools have not been contributing to the spread of COVID-19 at the same level. “The data-driven approach can be used not just to restrict activity, but to re-open safely,” Benson said.

What to know about Minnesota’s new restrictions on bars, restaurants and social gatherings