It is one of the fundamental principles of political redistricting in the United States: maps should be drawn so as not to deny, dilute or abridge the the voting rights of any group based on race or ethnicity.

The U.S. Supreme Court and federal laws like the Voting Rights Act have long demanded that new political maps not harm minority voting strength. And the special five-judge panel appointed by Minnesota Supreme Court Chief Justice Lorie Gildea to step in if the Minnesota Legislature can’t agree on new political boundaries — something it has been unable to do in five decades — featured the idea prominently in a November court order establishing its principles and requirements.

“This does not mean that minority-preferred candidates are guaranteed electoral success,” the panel wrote in a memorandum explaining those principles. “Rather, it means that racial, ethnic and language minority voters have a right to participate effectively in the political process.”

During a five-hour hearing before that special panel last week, each of the four plaintiffs who have asked the courts to take on redistricting emphasized how their respective plans would treat the state’s minority populations.

All four plans would create a similar number of majority-minority districts and what are called “minority opportunity districts” — those with at least 30 percent people of color. Only one of the plans, however, had as its founding principle the increased political clout of communities of color.

“We are the only party ever in the history of any judicial redistricting preceding in Minnesota … to directly and proactively engage Minnesota’s minority communities in this way to make sure that their voices were heard,” said Brian Dillon, an attorney representing the group known as the Corrie Plaintiffs. 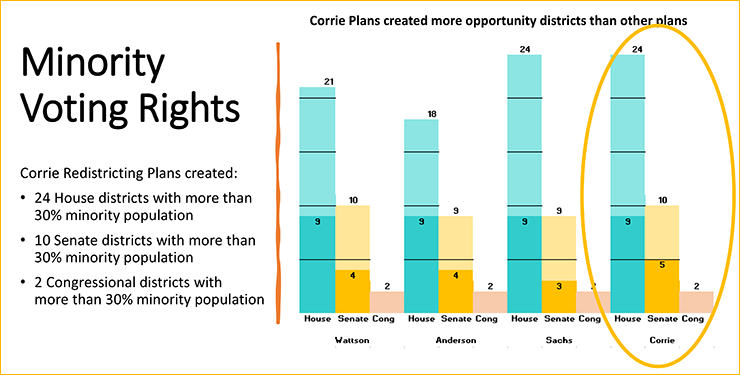 As part of his argument, Dillon objected to the other plans’ proposals to start with current maps drawn by a different panel of judges 10 years ago, which itself used maps drawn 20 years ago.

“We did not handcuff ourselves to existing maps that were drawn decades ago when Minnesota looked much-much different and was much-less diverse,” Dillon said.

And because of those changes, Dillon argued, the panel should not adopt a restrained or “least-change” approach, as some of the other groups involved in the case have urged.

“The least-change approach would unnecessarily limit this panel’s ability to account for the dynamic racial and ethnic changes that Minnesota has experienced over the last 10 years,” he said. “The panel’s challenge is to start fresh, to meet the moment, and be guided by the neutral principles you adopted. But don’t be restrained by a principle you didn’t adopt.”

The state’s track record when it comes to race and racial access to government have not been good, Dillon said. Just 12 percent of Minnesota legislators are people of color, and the state has elected just two people of color to Congress in its history, facts that help explain disparities in educational outcomes, wealth and home ownership.

“We can do better and we think it starts with redistricting,” Dillon said.

But Elizabeth Brama, an attorney representing the GOP-leaning Anderson Plaintiffs, said all four plans do about equally well in creating majority-minority and minority opportunity districts.

On this point, the DFL and GOP groups agree. In its written brief to the panel of judges, the DFL-aligned Sachs group wrote: “If the primary flaw in the Wattson Plaintiffs’ plan is too little change from the current map, the Corrie Plaintiffs’ plan represents the opposite: far too much change. While the Corrie Plaintiffs have achieved the smallest population deviation numbers, they do so at the expense of splitting political subdivisions, and without achieving substantially better results … in terms of protecting minority voting strength.”

In their written brief to the court, the Corrie plaintiffs acknowledge that their plans are similar to others’ in terms of minority clout. The group’s state Senate map, for instance, has 10 districts where minorities make up 30 percent or more of the voting-age population, the same number as Wattson plaintiffs and one more than the Sachs plaintiffs and Anderson plaintiffs.

The Corrie plan also creates 5 Senate districts in which two or more minority groups are combined to create a majority of the voting-age population, more than any of the other parties. The Sachs’ Senate map creates 3 such districts, while the Anderson and Wattson maps each only have 2 such districts.

During the hearing, attorneys for each of the groups praised their own plans and criticised the others. Of the GOP-leaning Anderson plan, for example, Wattson Plaintiff attorney Adam Sienkowski said: “I don’t see any evidence that they were intentionally diluting minority vote. But what I do see is an approach that just didn’t take it into account.” 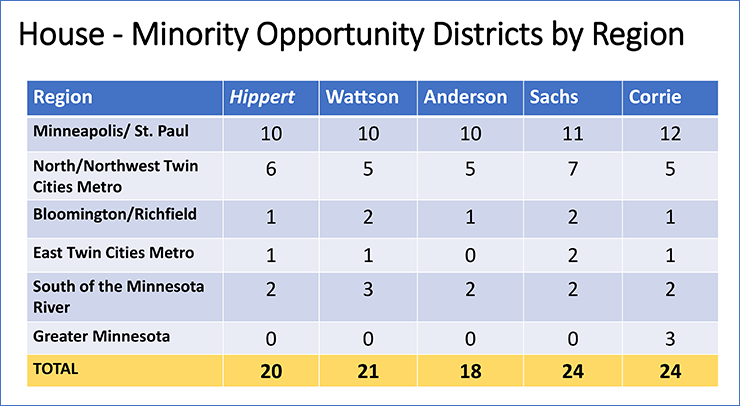 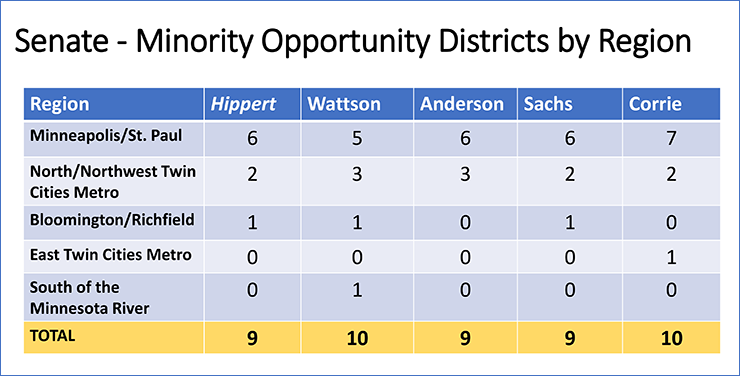 The Sachs plaintiffs also argued that the Anderson plan “suffers from numerous flaws, not least of which is that it severely dilutes minority voting strength.”

The redistricting panel’s principles also require that federally recognized American Indian tribal reservations “be preserved and must not be divided more than necessary to meet constitutional requirements.”

And how reservations are treated presented one of the most-stark differences between the Corrie Plaintiffs and the others. Corrie would create a new 8th Congressional District that encompasses the entire northern portion of the state, stretching from Wisconsin to North Dakota. In doing so, the plan would keep all of the state’s major reservations in one district, rather than splitting them between the current 8th District and the current 7th District.

That part of the plan drew criticism from the others plaintiffs, not only for the size of the proposed 8th District, but also for combining counties that have mining-based economies with those that are agricultural-based.

“It is a northern district, and we’re proud of it,” Dillon said. “It gives those Native American populations a better opportunity and ability than they’ve ever had before to make a congressional representative more responsive to their needs and their interests.”

That power would also extend to state legislative seats under their plan, the Corrie plaintiffs argued, by being the only plan that creates a state House district “where American Indian/Native American residents constitute 44.5% of the district population, giving this community the ability to elect candidates of choice when voting in alliance with others.”