1. The least change is the best change?

In filing the first lawsuit seeking Supreme Court intervention in drawing new congressional and legislative districts last year, Peter Wattson, a redistricting expert and former state Senate staffer, thought the end result would be maps that do just enough to even out population shifts.

He was right. Despite calls from one of the intervenors in the lawsuit calling for sweeping changes to boost the political clout of voters of color, the special five-judge panel overseeing the process went small when it redrew lines for Minnesota’s 201 legislative districts and eight congressional districts.

“Simply put, we are not positioned to draw entirely new congressional districts, as the legislature could choose to do,” wrote the panel in orders it released Tuesday.  “Rather, we start with the existing districts, changing them as necessary to remedy the constitutional defect by applying politically neutral redistricting principles. Still, our restrained approach does not leave any congressional district unchanged. Nor does it mean that all Minnesotans will view the changes as insubstantial.”

After making a similar declaration about legislative maps, the panel added: “​​When one district changes, so must its neighbors — a cascading effect that means even a district drawn ten years ago that remains within appropriate population deviation will need to change along with the rest of the state.”

2. There was still too much change for some legislators

They are called pairings: when two incumbents are placed within the same district and face a choice – run against another incumbent, move or retire. There are seven such pairings in the Senate and 12 in the House.

There are a few instances where a Republican incumbent and a DFL incumbent are crowded together. GOP Sen. Dave Osmek of Mound and DFL Sen. Ann Johnson Stewart of Wayzata, for example, are new rivals. So are DFL Rep. Rick Hansen of South St. Paul and GOP Rep. Keith Franke of St. Paul Park. 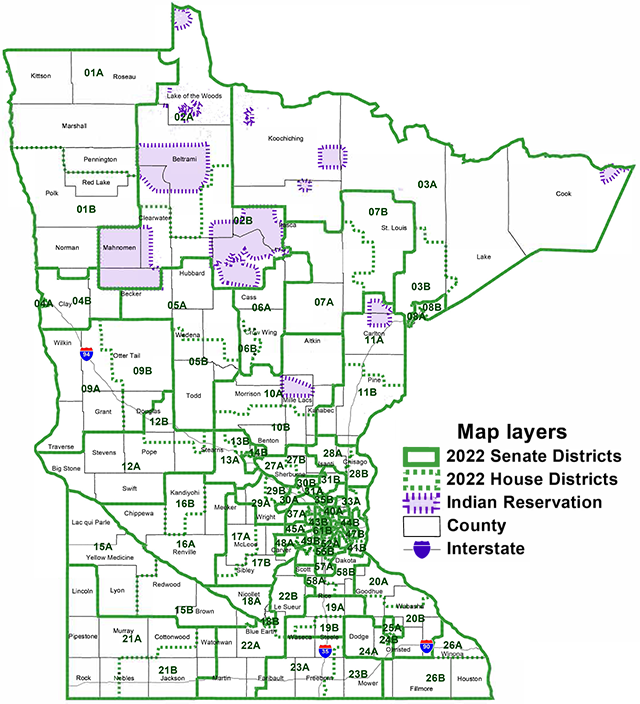 Candidates have to establish residency in a district at least six months before the general election so movers have a few months to find a Realtor.

In the order it released Tuesday, the panel essentially said: sorry not sorry. 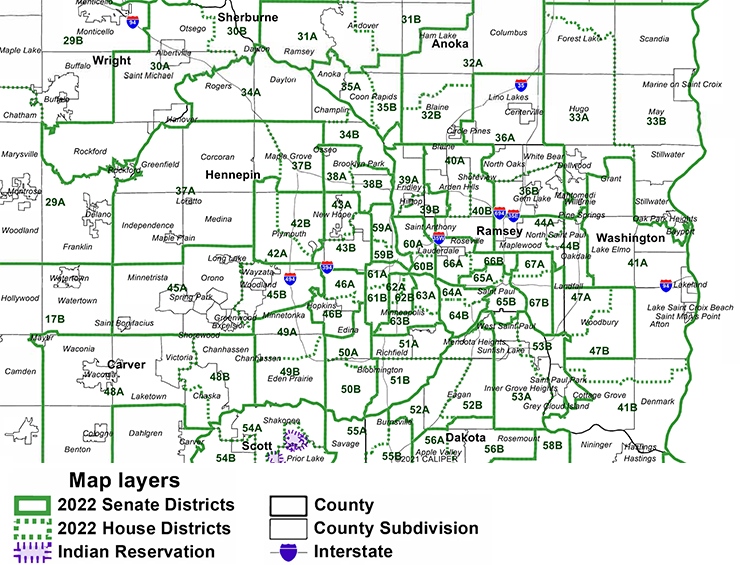 “We are aware that the changes to district lines have consequences for incumbent legislators, placing some outside the districts they currently represent, and pairing some with incumbent legislators of their own or an opposing party,” the panel wrote. “But election districts do not exist for the benefit of any particular legislator or political party. Rather, they exist for the people to select their representatives.”

3. Partisan advantage goes to … neither party

There are dozens of iterations where the new lines will be interpreted as helping one party or the other, one incumbent or the other. And on a case-by-case basis, that will be true. Some incumbents in battleground areas now appear to have safer districts, including those of GOP Sen. Karin Housley of  Stillwater and Sen. Warren Limmer of Maple Grove. 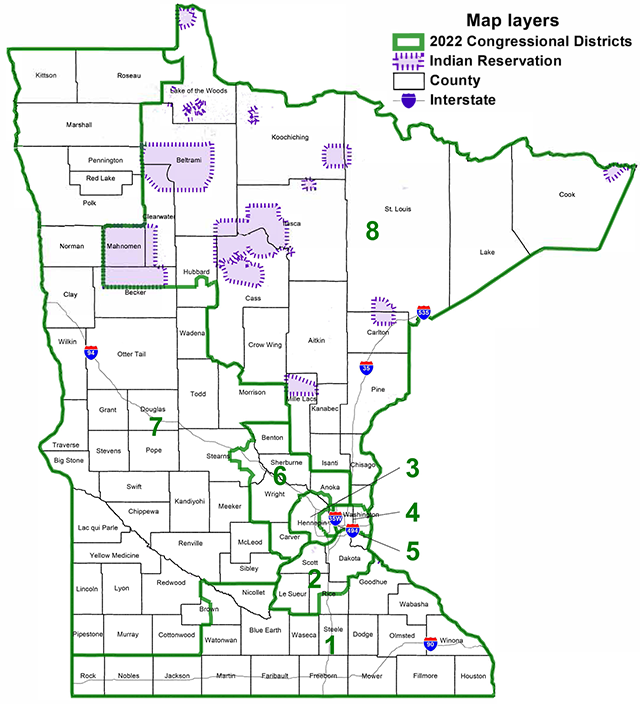 But overall, partly due to the least-change philosophy of the court panel, the changes appear minor. The congressional seats representing the 1st, 6th, 7th and 8th Congressional Districts were pretty solid GOP districts before redistricting; they remain so. At the same time, the 3rd, 4th and 5th Congressional Districts were pretty safe DFL districts before — and are pretty safe now, with U.S. Rep. Dean Phillips’ CD3 in particular looking somewhat safer for him. The state’s lone battleground congressional district, CD 2, where U.S. Rep Angie Craig is likely to have a rematch with Tyler Kistner, the partisan numbers are nearly identical as they were before.

Senate Majority Leader Jeremy Miller said he feels good about what he had seen early, calling the new lines fair.

DFL leaders, meanwhile, said they were still examining the maps and the underlying data to gauge how it changes their outlook.

4. People of color will have more clout

One of the fundamental principles of this process was that the plans shouldn’t be drawn “with the purpose or effect of of denying or abridging the voting rights” of minority populations.  Despite the work of an intervenor known as the Corrie Plaintiffs to push for more chances for candidates of color, the maps are similar as the 2012 plan with some improvements that might be driven as much by demographics as intent.

The court did acknowledge one of the primary arguments made by Corrie for increasing the influence of minority voters, however:  “We also learned that Minnesota’s population growth over the last decade is attributable entirely to increases among Black, Indigenous, and People of Color (BIPOC), making the BIPOC population nearly a quarter of the population statewide,” the panel wrote.

On the congressional side, two districts — the 4th and 5th — are considered minority opportunity districts by having more than 30 percent voters of color.

Census block level data and computer mapping software are such that a smart person with a laptop can do amazing things, including draw districts that meet population equality to a person.

On the congressional maps, each of six of the eight districts have 713,312 residents and two have 713,311 residents. That is, the only reason they aren’t all exactly equal is because eight doesn’t divide into the state’s Census population of 5,706,494 evenly.

The state House and Senate districts are not that exact, but none deviate from the average by more than 1 percent, less than half that allowed by the court’s own redistricting principles.

As much as poli-nerds will pore over the new maps and use them to predict the likelihood of one party or the other winning more seats, there is nothing in the data to explain the human side of politics. To illustrate that, look no further than state Rep. Paul Marquart who has held a DFL seat in a northwestern area that has gotten more, and more, and more Republican.

There are also political trends that can change results from one election to another. The party of incumbent presidents usually do poorly in the first midterm election after being sworn in. That’s this year for Democrats.

That said, parties would much rather start with a partisan lead than a deficit. That’s where they recruit their strongest candidates — and where they spend the most money.