Complaining about Uptown is one of the great, dubious Minneapolis pastimes, right up with waiting in line at the impound lot the morning after a Snow Emergency.

Of course, this complaining is justified, in some respects. Uptown can be a completely obnoxious neighborhood: overpriced, too self-consciously chic, choked with chain retailers and fratty theme bars, and full of hordes of noisy, thoughtless youth. In fact, while walking the route sketched out above, I was almost knocked off the sidewalk by two 21-year-olds, strutting arm-and-arm and screaming the lyrics to — no joke — Billy Joel’s “Uptown Girl” as they walked.

“God!” I muttered to myself as they passed. “Uptown! It is terrible!“

Of course, I realize my distaste is not entirely fair. There’s a good reason I wanted to file my first “The Stroll” column from Uptown. This column is going to be about seeing the art and visual culture of the Twin Cities from street level — basically, walking around and looking at things. For all the inherent risks of being run over by a mobile two-person youth-cult karaoke session, Uptown is vibrant, lively, and easily walkable. It’s an undeniably great place to walk around and look at things.

It’d be insane, though, to suggest that the sort of bohemian pansexual cool that Prince suggested when he wrote “Uptown” about the neighborhood in 1980 still reigns. There is nothing bohemian or pansexually cool about The North Face, which has a large retail store on Hennepin. Uptown suffers from a personality crisis unlike any other neighborhood in Minneapolis, caught between a low-rent, artsy McPunk past and an absurdly gentrified present. This tension makes it, as I noted, a great place for a walk. 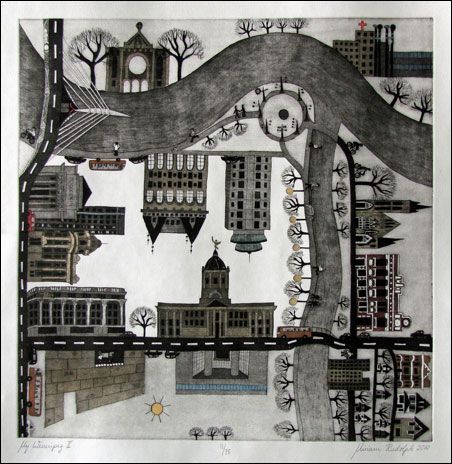 One consistently interesting venue for artists on the eastern edge of this neighborhood is the Highpoint Center of Printmaking, located near Colfax on West Lake Street. On display through Feb. 4 is “Twenty: the 20th Cooperative Exhibition,” its annual show for co-op members.

Among the standouts are two etchings by Miriam Rudolph, each one hand-colored in a muted palette of wintry neutral tones. They depict busy wintertime cityscapes of her previous home, Winnipeg, an icebound northern city that looks not unlike Minneapolis: “My Winnipeg II,” and “Red River Trail.” Working in a flattened, cartographic style that suggests the God’s-eye-view perspective of folk art, Rudolph carefully catalogs the city’s buildings, streets and geographic features. Even its artwork — students of Canadian history (and alternative comic books) will recognize a statue of Manitoba folk hero Louis Riel. Rudolph then fills these landscapes with bare trees, and completely charming depictions of citizens going about their daily lives: fishing, bicycling, commuting, running after one another. The work suggests the sort of eye for detail developed only after spending considerable amounts of time strolling around a place and getting it inside your head.

“My Winnipeg” is also the name of a remarkable 2009 quasi-documentary by Canadian filmmaker Guy Maddin. The film is an ambiguous but ultimately affectionate ode to his hometown, told through archival footage as well as grainy new 16mm footage. When I saw it (in Uptown, at the Lagoon, of course), I was struck by how the film’s thematic concerns — a meditation on a great frozen prairie city, often quick to disregard its own architectural and cultural heritage — seemed so Minneapolitan in character.

In the same way, the setting of these etchings seems hazily familiar. Rudolph relocated from Winnipeg last year, and is working as a co-op member at Highpoint. “I am curious how living in Minneapolis will shape my future work,” she writes in her artist’s statement. 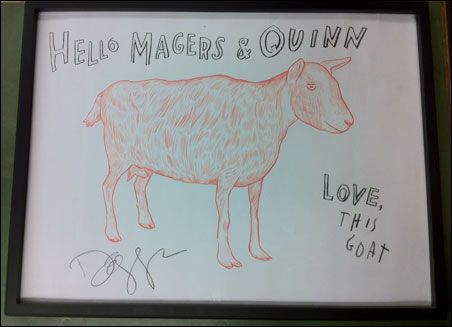 Walking west into Magers & Quinn Booksellers on Hennepin near 31st Street, I see a framed art print behind a back counter that I’d never noticed before. It’s of an odd, deadpan line drawing of a goat, staring serenely into the distance. “Hello Magers & Quinn,” a scrawled notation reads. “Love, This Goat.” The piece is signed, “Dave Eggers.”

The print comes from a book of animal drawings that Eggers released in 2010, entitled “It Is Right to Draw the Fur.”The book is a collection of monochromatic line drawings of animals that Eggers created for a gallery show in San Francisco. The drawings are much like the portrait of the goat: flanked with non-sequitur captions scrawled in grease pencil (“The wind knows nothing — don’t flatter her with questions”). Eggers is known primarily as a writer and publisher of the McSweeney’s publishing house. His early background, though, is actually as an artist and cartoonist, studying studio art at the University of Illinois before moving away from the visual arts for writing about the same time as his breakout memoir, “A Heartbreaking Work of Staggering Genius.”

The drawings in the book, which Magers & Quinn stocks, are technically adept and disarming in their good-natured nonchalance. “What,” asks the book’s publisher’s comments, “is the line between a doodle, a cartoon, a gag, and a work of fine art?” Eggers’ drawings are somewhat of each, but I think the artwork also asks an even trickier question than that: What does it mean to excel in one creative area, or even a few, and then create new work in another area? Where does “multidisciplinary” end and “dilettante” begin? How far does an artist’s reputation in one field carry over into another?

The weightiness of this question is defused by the easygoing, offhand quality of Eggers’ drawings. Underneath this studied nonchalance, though, there’s an almost utopian quality at work: the idea that an artist can move fluidly between disciplines, and simply work in whatever area he or she might feel comfortable with at any given time. This model of working resonates in particular with the generation of younger artists who feel as comfortable making screenprints and taking photographs as they do playing in bands and writing blogs — a comfort that stems from easily seeing the connections between all of these disciplines. Specialization, in contemporary art as in American economic life, seems sometimes to be a relic of another era.

Uptown’s personality crisis — indeed, you might even say the war for its very soul made physically manifest — is perfectly represented in the side-by-side window displays near West Lake at the end of our stroll. Los Angeles-based taste-making clothing retailer American Apparel — noted for its sparkly tights and oversexed advertising campaigns — is located to the left. Vintage and thrift retailer Ragstock — incorporated as the “Minneapolis Rag Stock Company” in the 1970s — has a store on the right.

American Apparel’s window is much like the window displays anywhere else in the country: chilly, aggressively hip. Its mannequins are ridiculously shapely and hypersexualized. It’s eye-catching, orderly, and vaguely inhuman.

Ragstock’s window display is very similar, on the surface: Some of the store’s featured clothing is on mannequins cavorting through a suggested landscape. The mannequins aren’t as shapely or new as their American Apparel counterparts, however — they look much older, as if they may have spent the previous part of their mannequin career modeling double-knit polyester wear at Dayton’s during the mayoral administration of Donald Fraser. Some shimmering, metallic party-favor fringes hang in the background. A few porcelain cats from someone’s grandmother’s house sit in the front window, smiling and modeling hats. It all looks very improvised and a little slapdash, like the sort of thing dreamed up by a bunch of clever, mischievous Ragstock workers.

American Apparel has legions of professional window-dressers; I don’t know for sure, but I’d imagine Ragstock’s displays are assembled by its staff. The woolly, anything-goes quality to Ragstock’s window display gives one hope for the continued survival of the old, weird Uptown.