Back to Uptown already? Weren’t we just here a few weeks ago, looking at window displays and etchings? Aren’t we done with Uptown?

We are not. Anyone living in the Twin Cities – and in Minneapolis, particularly – knows you’re never done with Uptown. Uptown has a way of drawing you back to it, no matter how much you complain about yuppies and chain stores and college students. Uptown and the surrounding area remains one of the best neighborhoods in Minneapolis to buy books (Magers & Quinn, Booksmart) and records (Treehouse, Fifth Element, Extreme Noise, Cheapo). Though the Uptown Bar is gone, it’s still a really good place to see live music. It’s a decent place to get a drink or a meal. And, if you’re a regular user of mass transit, it’s still the easiest place besides downtown to get a bus to or from.

Also, for the purposes of today’s column, it remains one of the best neighborhoods in which to go see a movie.

Once a year, for one week only, Uptown’s Lagoon Cinema hosts one of my favorite cinematic events of the year: playing the Oscar-nominated short animated films, as well as a few bonus “highly commended” selections. If you’re not in the habit of seeing this every year (though, based on the crowd at the Lagoon, many of you are), now’s the time to start. Obviously, it’s a great way to get the upper hand in your office Oscar pool. But more important, it’s the best way to experience the widest range of cinema possible in one sitting – you get sweet, Disney-ish stuff aimed at the kids, you get the weirdest experimental tangents imaginable, and you get everything in between.

That said, unfortunately the selection this year is largely disappointing. Of the five films nominated, the two American films in particular are quite weak – they’re several decibels louder than the other selections, and whiplash between dumb slapstick and maudlin slop (even, surprisingly, Pixar’s entry). Worse yet, they seem especially artless when put side-by-side with the two Canadian selections. Patrick Doyon’s “Dimanche / Sunday” is crude, sweet, and bizarre in equal measures. And “Wild Life,” by Amanda Forbis and Wendy Tilby, knocks me right out. Billed not-quite-tongue-in-cheek as “a Western,” it’s an animated mock-documentary about the life of a diffident English settler in the prairies of Alberta in the early 1910s, each frame hand-painted in gouache. It’s reminiscent of the work of painter Maira Kalman, and it’s breathtaking. You can watch it online, but do yourself a favor and see it in the theater this week. There’s more artistry and imagination in the 13 minutes of “Wild Life” than in all nine Best Picture nominees combined. That sounds like hyperbole, I know, but come on, “War Horse”? 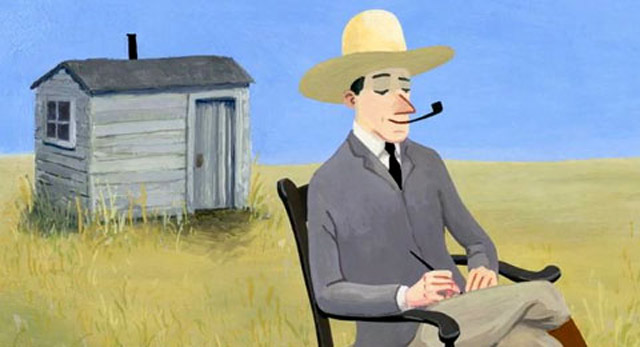 Courtesy of the National Film Board of Canada“Wild Life,” by Amanda Forbis and Wendy Tilby

Heading back into the daylight, I walk down Lagoon Avenue to the Uptown Theater, built in 1939 and currently closed until spring for extensive renovations. The Uptown was sort of – well, I hesitate to say it was a “dump,” exactly, but it wasn’t in great shape. The chairs were kind of droopy and shapeless, the projection system was completely outgunned by those at larger area theaters, and the whole place was a little musty. The renovations will tidy up all of that, in addition to adding a bar to the balcony.

Taking a peek through the front door, you can see they’ve already begun. If you could walk into the theater, you’d see two vaguely aquatic-themed art deco paintings on either side of the auditorium that I’d say are two of the best pieces of mural art in the entire city.

Or maybe “most underappreciated.” I’m probably in a minority on this one. In not one but two recent articles on the theater, the murals were specifically singled out as “weird.” The A.V. Club referred to them as “the weird neoclassical interior murals, which frankly look like rejected Of Montreal cover art.” Steve Marsh, writing at Mpls. St. Paul, refers to them as “those weird green neoclassical murals … that look like they were constructed by Soviet elementary-school children.” I laughed out loud at both of those lines, but I also think they’re quite unfair. First of all, the murals aren’t neoclassical. “Neoclassical” means chiseled, unhappy Greco-Romans with perfect bodily proportions and a handful of spears. These murals are the opposite of that. They’re eccentric art deco: highly graphic, stylized, energetic, and colorful. They’re a wet, sloppy kiss right on the mouth of the mid-20th century.

The creator of the pieces was a remarkable Austrian émigré and Minneapolis-based painter and muralist named Gustave Krollman. Born in Vienna in 1888 and a classmate of Egon Schiele at the Academy of Fine Art, Krollman was a professor at the Minneapolis School of Fine Arts (now MCAD) and a celebrated poster artist of his era. Sadly, he’s now largely forgotten. If you know his work at all, it’s probably the widely imitated railroad tourism posters he created for the Northern Pacific Railroad in the 1930s. He really had a way of capturing the sublimity of the western American landscape, and the streamlined modernity of the trains that sped travelers through them.

Though the murals aren’t viewable at the moment, there are two bas-relief sculptures, presumably designed by Krollman, on the exterior of the building. My favorite is on the Lagoon Avenue side. It’s a circular medallion, carved right into the Mankato-Kasota limestone, depicting a full range of fevered modern activity: a swooping airplane, a diving woman, soldiers marching in formation, a pair of racecars, and a team of rowers crossing a lake. Records being broken! Armies on the march! Technology advancing! To the left, two figures with a movie camera capture it all. It’s a poignant depiction of film as the preeminent documenter of the breathless excitement of the age by this great, overlooked Minneapolis artist. 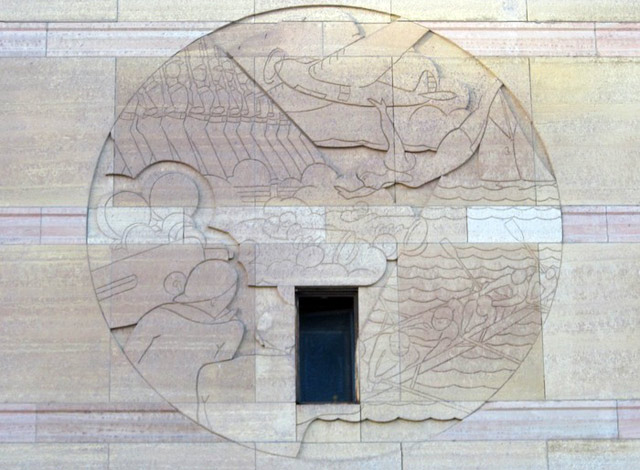 MinnPost photo by Andy SturdevantRecords being broken! Armies on the march! Technology advancing!

A block down Hennepin Avenue, we come across the Suburban World Theater, built more than 10 years before the Uptown, in 1927. It, too, is shuttered, and vacant until a buyer can be found. Originally known as the Granada, it’s accordingly designed to look like a Spanish courtyard, complete with mechanically twinkling stars in the canopy (it was given its now amusingly inappropriate moniker in 1954, when the new owners apparently decided that postwar Minneapolitans could be tricked into thinking Uptown was a suburb). It’s a reminder that not every movie theater of the era suggested forward-thinking, streamlined modernity. Some offered cozy, romantic escapism. 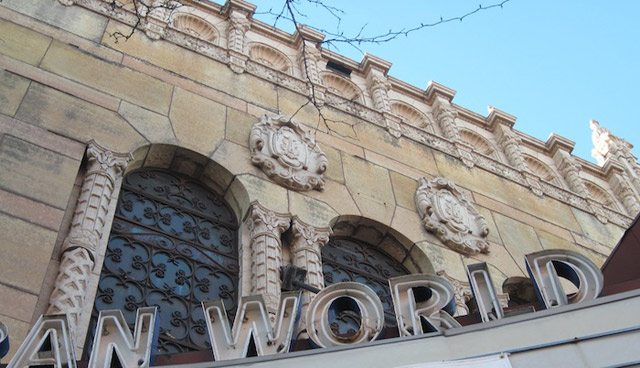 Oddly, these wildly different theaters share the same architects – the Minneapolis-based team of Jack Liebenberg and Seeman Kaplan, who also designed the Varsity, Edina, and Hollywood theaters. If you have an extra few hundred thousand dollars lying around your checking account, and some goodness in your heart, please buy this landmark. People need to continue to come to Uptown to see movies like “Wild Life.” People need these kinds of amazing spaces to sit and watch them.

Back to Uptown and its theaters