It’s looking increasingly likely that the Vikings will get their new stadium built on or near the Metrodome site, in downtown Minneapolis. Of all the commenting I’ve read on the topic, very few people seem willing to address the aesthetic concerns that go hand-in-hand with any large-scale urban project of this sort. My greatest worry is this: How badly will any new stadium developments disrupt the charming urban enclave that surrounds the Metrodome?

Ha! I’m just kidding. The area surrounding the Metrodome might be the most utterly charmless chunk of real estate in the entire city. It’s a desert-like expanse of surface parking lots, surrounding a cavernous cement-and-teflon building that everyone hates. Only chain-link fences, train tracks, and a tangle of high-speed interstate on- and off-ramps break up the endless sprawl of crumbling asphalt. Walking around on non-game days (which is to say, most of the year), you can traverse the entire square mile around the Metrodome on foot, and besides a handful of light-rail riders, you’ll encounter almost no one.

Writer Dara Moskowitz Grumdahl once referred to the area as a “futuristic nowhere,” and that sums it up pretty well. It’s a nowhere all right, practically post-human in its complete sense of abandonment. “The idea is to get the fans in, let ‘em see a game, and get them out again,” a Metrodome spokesperson famously explained when the facility opened in 1983. The site is indeed a monument to grim efficiency. It doesn’t encourage lingering or reflection. It’s a place to get in and the get the hell out of, as quickly as possible.

This is not to say, however, that there is nothing to see in the neighborhood. Far from it! If you’ve gotten anything out of this weekly feature so far, I hope it’s the realization that art is anywhere you’re willing to look for it, even in the bleakest stretches of the city. There are few stretches of the city bleaker than around the Dome on a late winter Sunday afternoon. Yet again, I am pleased that I find more than I can adequately cover in one column. Here is week one. 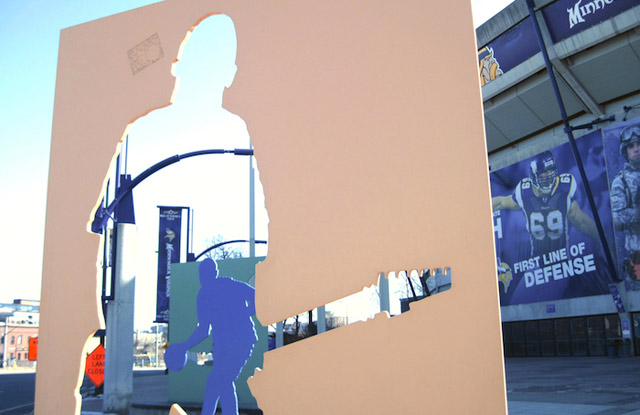 MinnPost photo by Andy SturdevantSculpture outside the Metrodome

I once told a local arts administrator, half-seriously, that some of my favorite pieces of public art in Minneapolis were those brightly colored metal silhouettes of the athletes in Metrodome Plaza, off Chicago Avenue. They were added to the site in 1996 by Ellerbe Beckett (now AECOM), the architecture firm responsible for the design of the plaza. The idea was – and here I quote the Star-Tribune – “to lessen the Dome’s sterile feel.” You can see these pieces as soon as you get off the light rail, which is where we’ll begin.

The arts administrator wrinkled her nose and told me, “Those aren’t really sculptures. Those are just fabrications.”

Well, depends on whom you ask, I guess. If art is any arena in which aesthetic decisions are made, these pieces qualify as art for me personally, for one reason alone.

Along with the basketball and football and baseball players, there is a figure of a guitarist. In addition to a sports facility, the Metrodome was also built to be a venue for musical concerts (some of them legendarily lousy). The guitarist sculpture is, I suppose, meant to be a reminder of the arena’s wide variety of potential uses. But if you look at a short list of acts that have played the Dome, it’s all pretty standard arena rock – the Stones, Pink Floyd, Genesis, Van Halen. You’ll notice that this guitarist doesn’t look anything like a typical arena rocker. No flapping hair or tight pants or wind-milling. He’s got close-cropped hair and a T-shirt and is wearing his guitar really low. He looks much more like a member of Minor Threat than the E Street Band.

Here’s the really weird part, though: If you count the tuning pegs, you’ll notice he’s playing a seven-string guitar. Who plays a seven-string guitar? Here I quote Wikipedia: “artists such as … Fear Factory, Steve Vai, Scribe, Dream Theater, Animals as Leaders, Trivium, Korn, Limp Bizkit, Deftones, Suicide Silence, Behemoth, Periphery, Nevermore, TesseracT, Textures and Mucc have all experimented with seven-string guitars over the years on different albums.” If these names are not sounding familiar to you, it’s basically a who’s-who of weird, difficult, unpleasant, obscure, and/or confrontational prog and metal bands of the past 20 years. Those are the only types of bands you ever see that utilize seven-string guitars.

So some artist or designer made a very conscious decision about this sculpture. He or she decided that this sculpture, to be placed outside what was then the largest arena rock venue in town, was secretly going to depict some crazy, experimental seven-string guitar-playing, Dream Theater-loving, alternate-tuning weirdo. If that’s the case, this is by far one of the best sculptural gags in the entire city. It does indeed, in the words of the Strib, “lessen the Dome’s sterile feel,” in a very sneaky sort of way. Enjoy this quiet joke while you can – I doubt our guitarist is going to survive once the Dome is imploded. 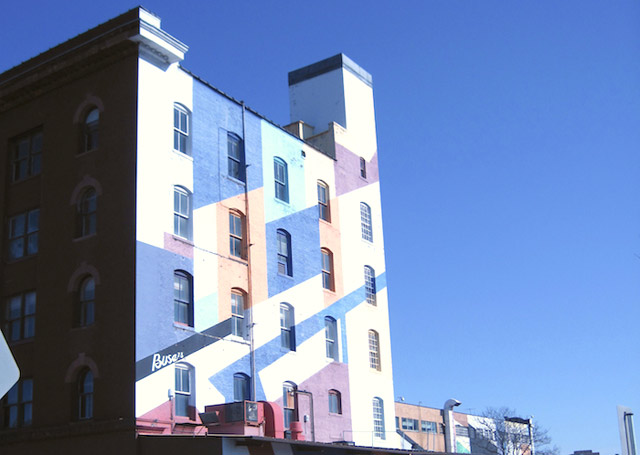 Next, cross those parking lots to the east of the Dome, and stand overlooking the junction where 3rd and 4th Streets come zooming on and off of I-35W. There you can see a piece of art that truly captures the essence of the local mindset responsible for projects like the Metrodome.

Peter Busa was an American abstract painter, born in Pittsburgh in 1914, and later based in New York City and Provincetown, Mass. He studied with pioneering proto-pop artist Stuart Davis, and like many artists of his generation, worked on Works Progress Administration murals in the 1930s. In the 1960s and 1970s, he was living in Minneapolis, and working as a studio art professor at the University of Minnesota. In 1973, the house paint manufacturer Valspar commissioned him to create a piece called “Demolition” on the side of its downtown Minneapolis headquarters. You’ve likely seen it hundreds of times. It’s that colorful, geometric mural, on the side of the brick building, right by 35W.

The Dome wasn’t the first project to alter the landscape of the area. Nineteen seventy-three was the year that 35W was built through downtown, connecting the portions to the north and south built a few years earlier in 1968. “Demolition,” painted that same year, is probably the first piece of artwork in the Cities created for the sole purpose of being seen from the highway. It’s meant to be seen from the inside of your car as you zoom north. In that sense, it’s a perfect reflection of the times. It’s a lovely piece, more playful and fun than a work on that scale should be. Busa’s work is certainly one of the city’s public-art highlights.

But think about what a radically different way to observe a mural this is than what tradition has dictated. A mural, historically, belongs to a public space, and is something to be contemplated – imagine the murals Busa probably made for the WPA, in post offices and high schools. They’re full of details and symbols. There are small pockets of activity that, when taken as a whole, create a larger narrative. “Demolition” is much simpler than that. It’s created to draw attention to itself, quickly and efficiently, as you pass. It imparts a brief moment of grace as you pass over an ugly part of the city on your way to somewhere else. Echoing the words of that long-ago Metrodome spokesperson, the idea here is to get the fans in, let ‘em see a mural, and get them out again.