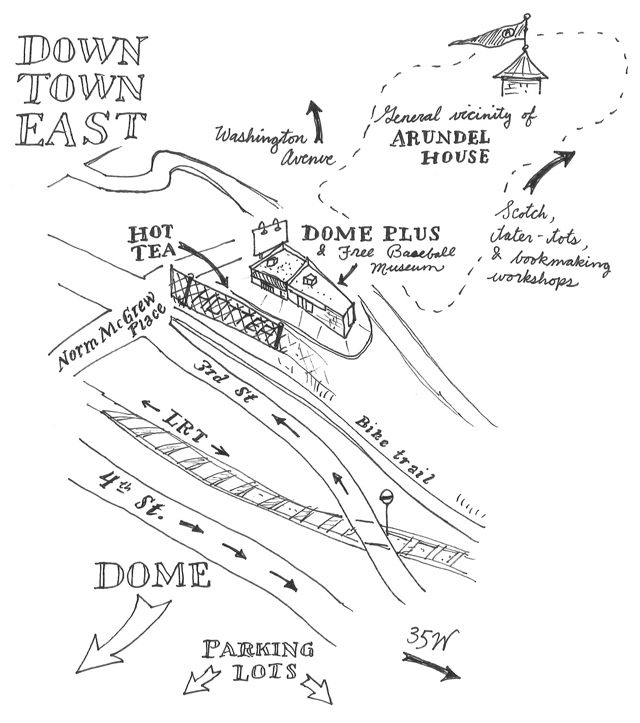 MinnPost illustration by Andy SturdevantEven in the blandest, most unlikely spaces — and no space is blander or less likely than around the Dome — you can find oddball qualities.

Despite how dismissive I may have sounded last week, I actually had a lot of love for the Metrodome itself, even from a purely aesthetic angle. There was something perversely appealing about how noisy and temperate and inhumanly plastic it all was. Visually, seeing a ball game there was more like “THX-1138” than “Pride of the Yankees,” but it was still great to be able to roll up 10 minutes before the first at-bat, slap down a $10 bill for a seat up under the enormous vinyl banner of Tony Oliva’s face, and still get enough change back to buy a beer. I loved the Baggie, and that animated “WALKS WILL HAUNT” robo-ghost, and the almost psychedelic visual effect of a few thousand people waving tiny white handkerchiefs at once. The Metrodome could be a lot of fun, because you often encountered the unexpected, and as a whole, the place could be really weird. Of course it was built to be a huge, unfeeling machine meant to deliver maximum sports-related entertainment as cheaply and efficiently as possible, and the awfulness of the area around it reflects that philosophy. But even then, those appealing oddball qualities seeped through.

Even in the blandest, most unlikely spaces — and no space is blander or less likely than around the Dome — you can find those qualities.

I’d call Dome Souvenirs Plus and Baseball Museum, located at 910 S. 3rd St., a perfect reflection of this idea, and probably one of the great hidden treasures of downtown. It’s greatness lies in its idiosyncrasies, and how much it is seemingly a pure vision of its owner, Ray Crump. Crump had been a batboy for the Washington Senators, and became the Twins’ equipment manager when the franchise moved to Minneapolis in 1961. Over a decades-long career, he accumulated a vast collection of completely one-of-a-kind items. The store and museum opened a few years after his retirement from the club, in 1986.

Dome Plus is not simply a standard Twins and Vikings sports merchandise shop, with jerseys and beer cozies and things like that for sale. Half of it is, but the other half is a free baseball museum, which looks very much like you might expect a museum assembled by a major league equipment manager to look. It’s almost overwhelming in its sheer quantity. The room (you often have to flip a light switch yourself when you walk in) is absolutely jam-packed with all manner of bats, jerseys, programs, and helmets under glass. Not only big-ticket items, but smaller things like shot glasses, calendars, promotional materials from local car dealerships, just about anything that could have had a Twins logo printed on it between 1961 and 1991. Most of the museum’s contents are Twins-related, but not exclusively. Aside from other MLB teams, Crump also had some interactions with show-business figures, so there is a wall’s worth of signed portraits of country music stars (as well as the inevitable Elvis-themed kiosk). It all feels much like the work of a single person’s vision, assembled over the course of a lifetime.

The museum is open during the week, and for a few hours on Saturday. The last time I dropped by hoping to take some photos, on a Sunday, I missed museum hours. But even if you make the same mistake, the many hand-painted murals outside are worth seeing up close. Seeing the enthusiastic exhortation to “VISIT OUR WALL OF CELEBRITIES!” (with the little portrait of Elvis silently nodding his assent) is a great experience all by itself. 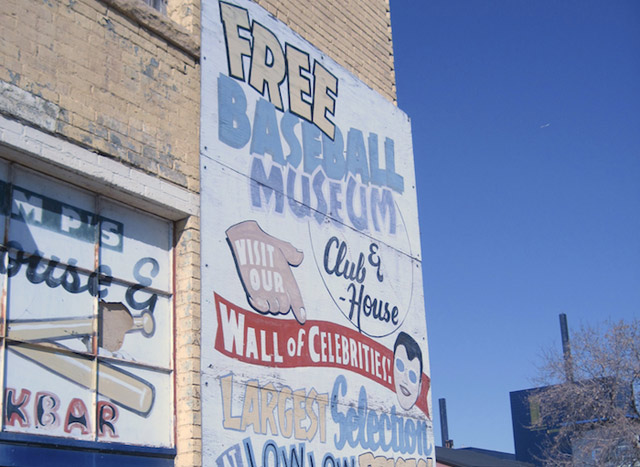 MinnPost photo by Andy SturdevantThe baseball museum is open during the week, and for a few hours on Saturday.

To get to Dome Plus from the Dome itself, you must cross three separate barriers, each one presenting an increasing level of danger from the last: 4th Street, where cars are accelerating to enter onto 35W southbound; the light-rail tracks, where trains are speeding in and out of the LRT station; and finally, 3rd Street, where cars are exiting 35W, slowing down from 70 mph as they make their approach into the city. Crossing 3rd and being extra careful to not be plowed over, I come across something unexpected: the remains of a work by the Minneapolis artist Eric Rieger, known professionally as HOT TEA. He’s best known for using colorful yarn to thread the phrase “HOTTEA” through chain link fences, in boxy, digital watch-styled lettering (like many people, I thought for some time they said “HOTTER”).

This piece looks like it’s a few months old; the yellow yarn is faded, segments are missing, and it’s just barely legible. I emailed Rieger to ask, and he reports this “font,” as he calls them, is only about two months old. Actually, that’s quite long-lived for one of his pieces. “In Uptown, where I usually put my work,” he writes, “I am lucky if they last a week.”

Unlike many of Rieger’s pieces, the words on this font are rendered in excitable italics, sloping at 45 degrees, as if the letters themselves are racing onto the highway. The italics seem to be a sly joke, a way of saying, “Hey! Stop long enough to read this, and you’re going to be run over by a fast-moving automobile!” It seems meant solely for pedestrians, in one of the least pedestrian-friendly parts of the city.

It’s fitting this piece should be decaying in the way it is. Rieger tells me he’s moving into a new phase of his work, and that he’s starting to move away from these sorts of fonts: “You may begin to see less and less of the actual italicized font and more experimental typography and installations that react to a specific space.” 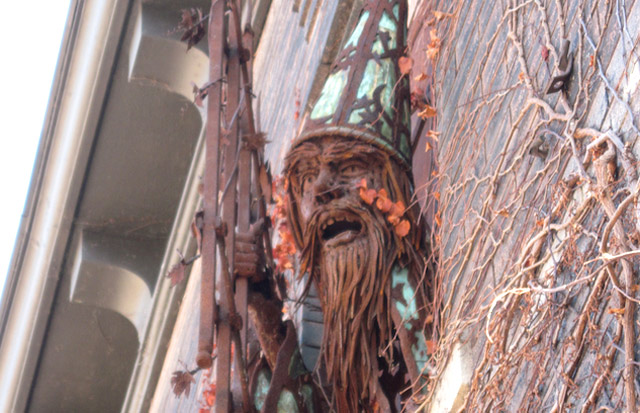 MinnPost photo by Andy Sturdevant‘My child, go have a plate of tater tots and a glass of Scotch at Grumpy’s.’

Make it across all of that, and you will find one of the most amazing private residences in the Twin Cities. On one of the nearby north-south avenues, off 3rd Street, there is a two-story former blacksmith’s shop. The entire building has been retrofitted to look like a fantasy medieval castle, complete with metal dragon gargoyles, a wrought-iron gate (behind which sits a brick courtyard), and turrets flying mysterious pennant-like banners. The metalwork is the work of sculptor Paul Tierney, and commissioned by the home’s owner, musician Jeff Arundel. It’s located well off the area’s main drag of Washington Avenue, hidden in a relatively quiet cul-de-sac right on the border of Metrodomeland and the Washington Avenue commercial district. Despite being located in the middle of downtown, you’d miss it – unless you lived there, or were cutting through backstreets on foot.

Peeking out of a second-floor window as you walk down the avenue, cobblestones beneath your feet, there is the highlight of the whole experience: a bearded metal wizard, highlighted in an oxidized green patina, looking down at you. His mouth his agape.

“Congratulations,” he seems to bellow. “You have traversed vast asphalt wastelands, and you have beheld many wondrous sights – a man with seven strings on his guitar, and a photo of the man who is called The King.”

It’s true, metal wizard! I have!

“You have passed through this godforsaken borderland, and have arrived back in your homeland – back in the real Minneapolis. A land where there are sidewalks, and old buildings, and sit-down restaurants. My child, go have a plate of tater tots and a glass of Scotch at Grumpy’s, then go sign up to take classes at the Minnesota Center for Book Arts. Your journey has come to an end.”

Thanks, metal wizard! I will!

Metrodome district, part 2: Souvenirs, a museum and other hidden gems