The area of South Minneapolis by Powderhorn Park is the almost perfect expression of what the central residential district of an Upper Midwestern city should look like. Rows and rows of single-family homes, duplexes and triplexes, made of stucco and brick, built on narrow lots, set on now-vanished streetcar lines. Some of the houses are tired and run down-looking, but many are colorfully painted and decorated: pastels, bright primaries, and colored woodwork and trim.

I’ve taken more than one East Coast friend for a walk through these neighborhoods, only to have them look around with confusion and say, “This doesn’t look like a city. This looks like a really old suburb. This looks like New Jersey.”

And of course, they’re right. Walking through the south side is a reminder of just how new Minneapolis really is, compared to the eastern cities (or even St. Paul). It’s much closer in age to the suburbs of New Jersey than New York City. These neighborhoods were built between the turn of the century and the 1920s, very quickly, spread out on the streetcar lines that ran on Lake, Portland, Bloomington, Chicago and others. The streetcars enabled Minneapolitans to live farther and farther out. They were “suburbs” in the literal sense of being below the city center.

But they’re packed fairly densely around this part of the city. Not as dense as older neighborhoods like Stevens Square or Loring Park, but fairly dense all the same. It’s dense enough that, in the space of only five or so blocks, I come across more interesting sights to see than I can reasonably fit into one column. This week is part one. 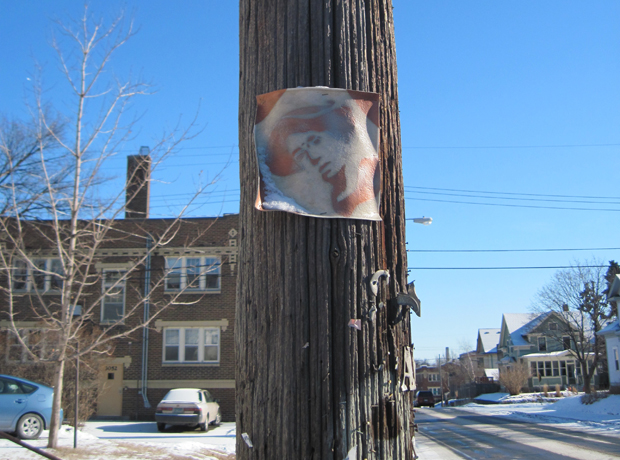 Between 12th Avenue South and Chicago, there are a few telephone poles with weathered portraits of anarchist Emma Goldman stapled to them. They’re stenciled with red and blue spray paint on what looks like some sort of vinyl. I’m actually only 90 percent sure it’s Emma Goldman. It could be Rosa Luxemberg — it’s sometimes hard to make out exact facial features where stencils are concerned. Most likely it’s Emma Goldman, who actually visited Minnesota on a number of occasions, giving lectures in St. Paul, Fargo and Duluth between 1911 and 1916.

It’s enjoyable to consider who the audience for these pieces is. As far as political art is concerned, I’d say there are two kinds: To borrow from the language of religion, there’s proselytizing and affirmational. Proselytizing political art appeals to potential converts; it actively attempts to influence viewers by appealing to their reason, or emotions, or otherwise challenging their beliefs. Affirmational political art, on the other hand, appeals to like-minded individuals. It creates a sense of camaraderie. These stencils are the latter. It’s very unlikely a person walking down 31st Street would recognize a portrait of Emma Goldman with no supporting information (such as a caption like “READ MORE EMMA GOLDMAN”), unless they were already somewhat familiar with 20th century leftist thought. These stencils say to the people who would recognize a portrait of Emma Goldman, “This is a neighborhood where these ideas have some currency.” Depending on your political inclinations, you might find this comforting or distressing. 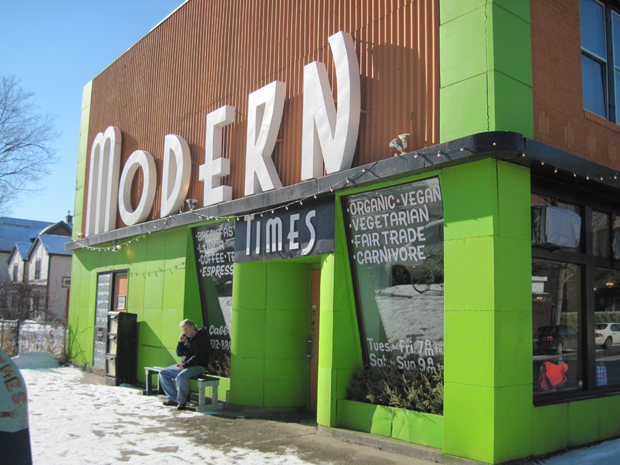 Near the last Goldman stencil is one of the very greatest commercial buildings in the neighborhood, at Chicago and 32nd: Modern Times Café. The building itself is about a hundred years old, but at some point in the 1940s, the then-management of Modern Cleaners, Inc., decided they were going to emphasize the “Modern” aspect of their business in the biggest way possible. And why not? By the previous decade, dry cleaning had entered the modern age. “We only use the most modern dry cleaning techniques!” these small businesspeople may have shouted at one another, drawing up their plans for the building. “Perchloroethylene is the perfect modern solvent! It has excellent cleaning power and is stable, nonflammable, and gentle on most garments!” (I am directly quoting Wikipedia’s article on the history of dry cleaning here, but this does sound like something an excitable dry cleaning magnate might have shouted circa 1941.)

And so, in commemoration of this triumph of science, design and commerce, up went the building’s front sign: the name of the business written out, almost a story high, in an absolutely breathtaking, gleaming white Streamline Moderne typeface. M O D E R N.

The cleaners packed it in at some point in the last 60 years, and the building changed hands a number of times. A few years ago, a new restaurant moved in and the sign came down. I’d read enough Larry Millett by that time to know that this is simply a condition of living in Minneapolis — eventually, these wonderful bits of architecture will simply disappear, never to return. I was extremely disappointed, but resigned to the fact that it was just one of those things.

So imagine my delight when the letters went back up about a year ago. As I learned, Southside Pride publisher Ed Felien owned the building, and he’d simply kept the letters in the basement when tenants decided not to make use of it. Fortunately, the new owners of Modern Times decided to resurrect the “MODERN” sign. They also brought back the smaller “TIMES” signage that sits below it, originally fabricated in the 1970s for the first Modern Times Café, a sort of hippie-Jewish neighborhood deli.

Modern Times is home to a semi-public multidisciplinary art studio in an adjoining part of the building. A few artists work in this space, including painters Andrew Mazorol and Tynan Kerr, jewelers Annika Kaplan and Emily Temte, and until recently, calligrapher Emily Snyder. Others involved in the café are artists, as well: Darah Lundberg is a welder, and with Mazorol and Kerr, created the distinctive pastel-psychedelic table fixtures in the restaurant. The sign outside the front door (also created by Kerr and Mazorol in a style similar to their collaborative canvas paintings) reflects the artistic pedigree of the space nicely: a sort of bearded burger lord stands astride a roiling landscape, letting all who pass know that the restaurant is OPEN.

Annika Kaplan lets me into the studio on a recent afternoon through the door in the dining area. She has been a jeweler for eight years, first studying at the Savannah College of Art Design, and completing her degree at the Minneapolis Community and Technical College. Her designs are subtle and very meticulous, with geometric flourishes, made primarily from silver and gold, with small semi-precious gemstones making an occasional appearance. 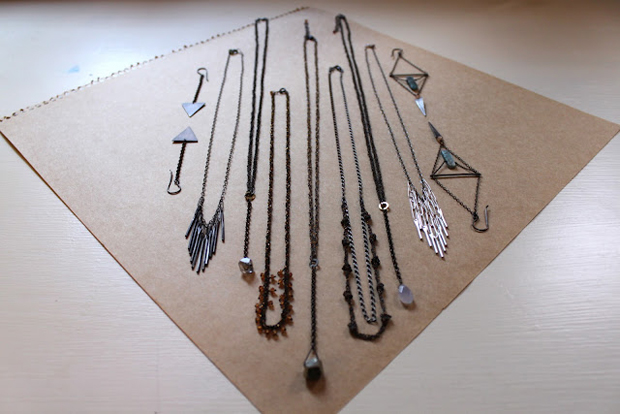 As we talk, Tynan Kerr works quietly in a corner on a large-scale canvas painting. The studio is not public, exactly, and the door is usually shut during regular hours. “People have really respected the door,” she tells me. This doesn’t mean that people aren’t welcome in the studio, however. Having a studio adjoining a café does create a point of entry for those interested in her work. “It’s good to be able to have visitors. I feel good hosting people here,” she continues. “People can make appointments with me easily.”

The studio is open, comfortable, and well-lit. In addition to the studio spaces, the café’s business desk is located in the room, as well. Being occupied by artists working in so many disciplines — both fine art and craft — as well as an office, the room feels less like a formal art studio than a workshop.

That indefinable, multidisciplinary quality is exciting to Annika and the artists who share the space. None of them would prefer working in a completely homogenous space dedicated solely to one discipline — it’s a more natural reflection of the way young artists connect with one another across mediums and traditional artistic categories. “I like the different working styles,” she says. “The negotiations that you have to make with each other.”

Keeping with this philosophy, she recently launched an online handmade goods seller called SHIP & SHAPE with some of her friends and colleagues. The website sells not just jewelry, but also art prints, ceramics, clothing, textiles — “anything labor intensive.” It features work by artists with primarily Minneapolis connections, but the scope is wider than simply selling locally. The common denominator is not the work’s origin or the specific category in which the work might belong, but the quality of the work itself.

“We want,” she tells me, sitting by her desk, “to eventually sell everything.”