Before getting to the second part of our walk around Powderhorn and seeing the paintings in the windows I promised you last week, I first want to take a quick detour about two miles west, over I-35W in the Calhoun-Isles area of Uptown. It doesn’t have much to do with Powderhorn, but it does have to do with seeing artwork in windows.

A few years ago, I was biking through the alleys around 35th and Bryant, and passed a two-story garage that a homemade sign nailed to the top. “They Won’t Find Us Here Gallery,” it read in crudely lettered Helvetica. I wasn’t sure if it was an obscure joke, or the name of a fake gallery, or the name of an actual gallery. As is sometimes the case, maybe it was all three. To be safe, I made a note of the name.

Courtesy of They Won’t Find Us Here

It turned out it was an actual gallery — a project space started by a few recent MCAD graduates in the garage behind their house. Over the last few years, I saw a handful of memorable shows there (perhaps most notable for me being a multisided ping-pong table created by David Petersen, for up to four players to use simultaneously). I was reminded of the space this week because I idly checked their website to see what was coming up, and saw an announcement that they’d decided “to put that baby to bed.” The space was conceived as a temporary, on-and-off space, so this isn’t a great surprise, but I’m sad to see it go all the same. There seems to be a real lack of nontraditional art and project spaces around Minneapolis these days, and TWFUH filled a valuable niche. “We have really enjoyed everything that has come to pass here and we hope that you did as well,” continued the announcement on the website. “We hope that others begin, and continue to, with even more enthusiasm and more energy than we did, run off-and-on spaces.”

I suppose it’s likely I’d have come across They Won’t Find Us Here at some point, but I’m glad my initial contact happened the way it did. I’m glad it involved standing across an alley and looking up at an enigmatic sign, scratching my head. It’s one of the best things that can happen to you in a city, coming across this type of indefinite evidence of artistic production. What is this, exactly? Is it an advertisement for something? Is it a joke? Is it art? Am I supposed to know about this? Am I allowed to know about this?

On that note, back to Powderhorn. Walking parallel to Lake Street on 31st, somewhere between 10th and 15th, I come across a white, two-story home with a red door, and with each window featuring what looks like a poster peering out. Upon closer inspection — or as close as one can get without acting like a creep and actually peering into a private residence — I see they’re actually paintings, on stretched canvas. The paintings are text-heavy, and suggest a deadpan sense of humor. “I need you so much closer,” reads one, with a black-and-white telephone. “She really likes her bike,” reads another, giving voice to a popular Minneapolis sentiment. “Welcome to our home,” warns a third, decorated with an antique M1 rifle. I write a quick note (basically, “hi, can I chat with you about these paintings?”), include my email, and leave it in the mailbox. A day or two later, I get a friendly email from an artist named Clyde Valentine, the house’s resident and the creator of the work in the windows.

Valentine is a native of Indiana who moved to Minneapolis from Ventura, Calif., in 2010. She lives in the house with her girlfriend Amy, whom she met after selling a painting to her (“I just bought a huge house,” began the initial correspondence, “and I want some paintings for the walls”). Valentine had a successful artistic career in California, and sells a great deal of her work from her website. Many of them are private commissions. She works out of a studio in the house, and the entire house is full of her work.

The first painting she put in a window was one that had a canvas too thin in places to sell because of a sanding accident, but the piece fit the rear window of the house overlooking the backyard quite well. It turned out to be great way to meet her neighbors in the warm months. “People would be walking by with their dogs while we were in the garden,” she says. “And they’d come up and talk to us. You put paintings in the windows, and people stop by.”

She’s booked up with commissions for the next few months. Valentine tells me a story about an amusing recent conversation she had with an art broker back in California, who was trying in vain to understand her new, unfathomable Midwestern methods of working. The broker frowned, hearing of her recent successes, and asked, “So, do you sell your work in any other way other than the Internet and your window?“ 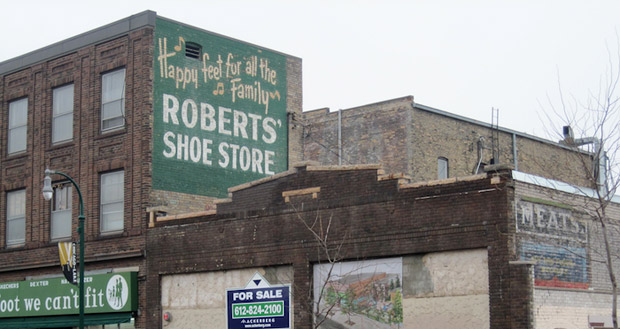 Walking up Chicago a few blocks past Lake into the Phillips neighborhood, we come across a window box at Roberts Shoes (whose Eisenhower-era “Happy Feet for All the Family” mural on the north side of the building is itself a legendary local work of art). This window houses the Shoebox Gallery, an 8′ x 8′ x 2′ space run by artist and building resident Sean Smuda since 2003, and located entirely within the window display.

Shoebox, just by virtue of being located inside a window surrounded on either side by other windows full of shoes and signage, usually blends into its surroundings to some extent. The piece currently on display disappears even more so by making clever use of explicitly commercial visual language. A collaboration between artists Sarah Ann Baker and Chris Hontos, it’s very simple: a hand-lettered sign on a post that reads “NO DANCING 1990 – 97,” resting behind a sheer, cream-colored curtain stretched just behind the glass. The text on the sign is the perfect replication of the type of hand-painted commercial lettering you see on neon posterboard in the windows of small businesses all over the city.

It’s not clear if they’ve fabricated the sign, or if it was found somewhere and then repurposed. Nor it is clear at whom the sign is directed – the salsa studio located in the building? – or what the dates might have to do with it. It doesn’t particularly matter, as the sign seems right at home anyway, blending guilelessly into the busy commercial surroundings of Lake and Chicago. A pedestrian might walk by, and take a moment to wonder what he or she is seeing, as I did a few years ago in the alley behind Bryant Avenue. What is this, exactly? Is it an advertisement for something? Is it a joke? Is it art? Am I supposed to know about this? Am I allowed to know about this?

Powderhorn, Part 2: Artistic enigmas — on a detour, at an artist’s home, and at the Shoebox