MinnPost illustration by Andy SturdevantThe first part of ‘Memories of a Catholic Girlhood’ takes place in Minneapolis, primarily within a 10-block radius of the Whittier neighborhood.

Here’s a good selection for your book club: novelist, essayist and critic Mary McCarthy’s 1957 autobiography, “Memories of a Catholic Girlhood.” McCarthy is one of the great essayists of the 20th century, and certainly one of the wittiest. Her quip about her rival Lillian Hellman — “every word she writes is a lie, including ‘and’ and ‘the’ ” — remains perhaps my favorite literary insult of all time.

The first part of “Memories of a Catholic Girlhood” takes place in Minneapolis, primarily within a 10-block radius of the Whittier neighborhood. This witty, thoughtful memoir is primarily a look at the influences and factors that would shape her later career as a writer, so I thought it would be interesting to take a walk around and see some of the key sites she describes, as they appear today. Though McCarthy was born in Seattle, when her parents died in the 1918 flu epidemic, she and her brothers were sent to live with an abusive great uncle in Minneapolis. Here she remained for five miserable years, until she was taken back to Seattle by her maternal grandparents.

From 1918 to 1923, McCarthy lived with her cruel, pathetic Uncle Myers and his wife in a small yellow house at 2427 Blaisdell Avenue. “Flanked by two-family houses,” she writes, “it was simply a crude box in which to stow furniture, and lives, like a warehouse.” This is a striking description of the soullessness of certain types of little houses you often come across, in both urban and suburban settings.

It’s somewhat difficult, though, as modern viewers, to agree with this specific aesthetic assessment. Whittier is now generally thought to have some of the lovelier housing stock in the city. Compared to the rickety little ramblers and stucco duplexes that make up much of the rest of Minneapolis’s post-1918 housing, Whittier’s solid, well-built turn-of-the-century brick residences, with their wood floors and interiors, seem wildly more appealing. In fact, the “crude box” at 2427 Blaisdell is now gone; in its place is a truly unattractive multi-unit brick apartment building, built in 1958. How perceptions change. 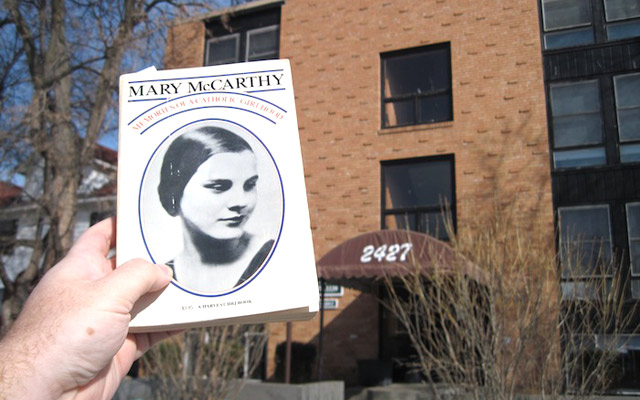 MinnPost photo by Andy SturdevantThe “crude box” at 2427 Blaisdell is now gone; in its place is a truly unattractive multi-unit brick apartment building, built in 1958.

Young McCarthy was an exceptionally devout child, and much of the memoir is about how the intellectual experience of Catholicism shaped her adult thinking, although she abandoned the church at a quite early age. She writes of her experiences at St. Stephen’s, located at 2201 Clinton Avenue:

Looking back, I see that it was religion that saved me. Our ugly church and parochial school provided me with my only aesthetic outlet, in the words of the Mass and the litanies and the old Latin hymns, in the Easter lilies around the altar, rosaries, ornamented prayer books, votive lamps, holy cards stamped in gold and decorated with flower wreaths and a saint’s picture. This side of Catholicism, much of it cheapened and debased by mass production, was for me, nevertheless, the equivalent of Gothic cathedrals and illuminated manuscripts and mystery plays. I threw myself into it with ardor, this sensuous life … .

St. Stephen’s itself appears quite unchanged a century later. The building itself — again, difficult now to think of such a stately church as “ugly” in any way — was built in 1889. Inside, the displays of votive candles, ornaments and statuary that so moved McCarthy as a child remain surprisingly intact, much as she must have experienced them in 1918. It’s easy to forget just how Catholic a state Minnesota was at this time — over 40 percent of churchgoers professed the Catholic faith, nearly twice as many as those professing Lutheranism. (A side note from McCarthy here: “Lutheranism to us children was, first of all, a religion for servant girls and, secondly, a sort of yellow corruption associated with original sin and with Martin Luther’s tongue rotting in his mouth as God’s punishment.”) Entire neighborhoods were organized around the local parish. In Whittier, McCarthy’s social, educational, cultural and spiritual life revolved around St. Stephen’s, only blocks from her house.

The neighborhood around the church has changed greatly, though. If St. Stephen’s had stood one block to the east, it would have been obliterated by I-35W, as the looming, nearby sound barrier wall attests. Indeed, the interstate tore a swath through 25 blocks of the parish in the 1960s, obliterating hundreds of houses, displacing numerous families, and upending the neighborhood. One can only imagine how disruptive this event would have been to the area. 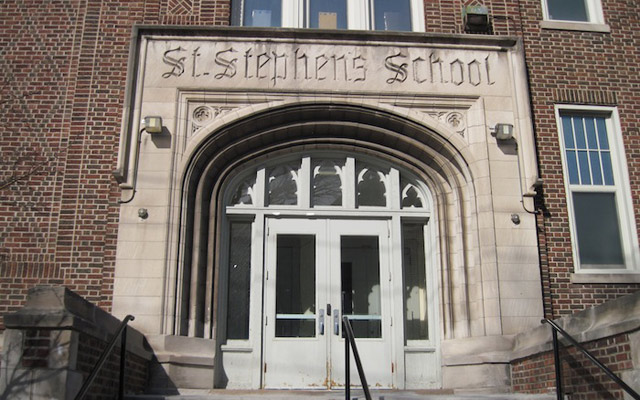 MinnPost photo by Andy Sturdevant‘Our ugly church and parochial school provided me with my only aesthetic outlet.’

The church was perhaps not Mary’s only aesthetic outlet. Though her Uncle Myers is professed to have hated museums, the Minneapolis Institute of Arts stood only blocks away from 24th and Blaisdell. On at least one occasion, McCarthy ran away from home, an act she called “her only form of complaint.” She spent the day hiding behind a statue of Laocoön, the Trojan priest of antiquity who coined the phrase “beware of Greeks bearing gifts” before being strangled to death by sea serpents. The most famous depiction is at the Vatican.

I went to the museum to see the statue, only to find it did not exist. “The MIA does not have — and never had — a statue of the Laocoön,” says Eike D. Schmidt, James Ford Bell Curator of Decorative Arts and Sculpture and head of the Department of Decorative Arts, Textiles & Sculpture at the MIA. He continues:

“Having said that, it is possible — and given Mary McCarthy’s account, I would say it is likely — that a plaster cast after the Laocoön was displayed at the museum at the time. As many other American museums, plaster casts of famous sculptures played an important role in museum displays in the 19th and early 20th century, but they soon came out of fashion, and in fact, the MIA’s plaster casts were deaccessioned in 1958. Unfortunately no cast of the Laocoön has survived, nor do we have positive evidence at this time for the presence of such a cast in the galleries in the 1920s. But that is really what it must have been.” 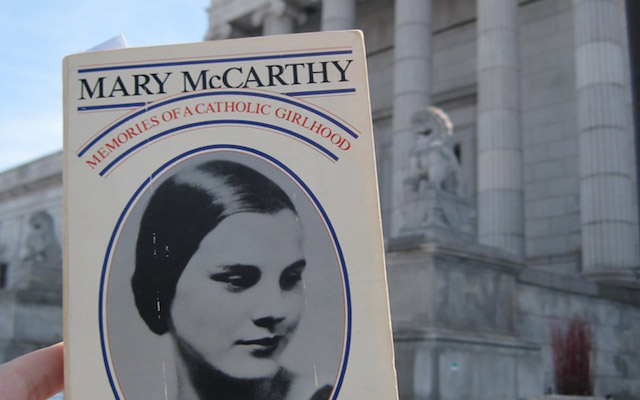 MinnPost photo by Andy Sturdevant‘The MIA does not have — and never had — a statue of the Laocoön.’

It’s tempting to want to claim McCarthy as one of Minneapolis’s own — you and I both know our civic character loves any reason to claim an artist — but the experiences outlined in this beautiful book are so uniformly bleak that it’d seem quite perverse to do so. Even her descriptions of the physical details of the city around her are grim: “The people I was forced to live with in Minneapolis had a positive gift for turning everything sour and ugly,” she notes. “Even our flowers were hideous; we had golden glow and sickly nasturtiums in our yard.” Yet the Whittier she depicts — a close-knit, somewhat repressive Catholic enclave of parish priests and Scandinavian servant girls — is fascinating in just how unrecognizable it seems today.