This past Saturday, around 12:30 p.m., I was sitting in a library in south Minneapolis, looking around and wondering why so many people around me were wearing green. It was then that it struck me: Of course! It’s the middle of March, which means it must be St. Patrick’s Day today!

Then this thought occurred to me: Oh no! I should be in downtown St. Paul right now, taking pictures of the parade! It’s going on right now!

But even so, St. Paul is actually a much better place to see a wider assortment of flags than Minneapolis, for one reason: It’s a capital city and a seat of government. When looking for flags, keep in mind what I will call “the three P’s.” These are the three types of venues where you are most likely to encounter flags:

A capital city has a much higher all-around percentage of these things than a non-government city like Minneapolis. Public buildings, parades and protests accumulate around seats of political power, and St. Paul is where this power resides in Minnesota. In terms of the second “P,” I missed the St. Patrick’s Day parade, so I can’t report on the many wonders there were to behold. Definitely there were a great many Irish flags, and probably some excellent police and fire department flags, as well. What did I miss? I understand in New York, the St. Patrick’s Day parade typically includes a flag of each county in Ireland. Do we do that? Let me know in the comments.

Irish tricolors aside, there are all types of flags to be seen in downtown St. Paul, many more than you might expect. Not counting fake flags with business logos printed on them, downtown Minneapolis really just has three types: American flags, Minnesota flags, and the flag of the city of Minneapolis (the latter two discussed in great detail last week). St. Paul, on the other hand, has plenty of the former two, and even more varieties you’d never come across in downtown Minneapolis. Even on a non-parade, non-protest day, one finds a healthy assortment of banners proclaiming allegiance to various ecclesiastical, international military, and civic concerns. In fact, you find almost every type of flag in downtown St. Paul but one.

The one flag you never see is the flag of the city of St. Paul. Here it is, courtesy of Wikipedia:

Or perhaps I’m just not seeing it. Biking from Lowertown to the edge of Frogtown, I couldn’t find a single one flying anywhere. Not at City Hall, not at the Capitol, not outside the Landmark Center, or the Post Office, or any of the courthouses, or Pioneer Press headquarters, or anywhere else closely affiliated with the city where you might expect to see its flag.

This is a shame. I actually sort of like the St. Paul flag, more than its Minneapolis counterpart. Sure, it’s a little silly and over-literal. But it looks more or less like a flag should: It’s three primary colors, there’s a north star, and there’s a shield. The log cabin is a nice, meaningful touch. I’m not sure what the story is with the winged wheel – is it a steamboat wheel? A nod to the city’s early automotive industry? – but at least it’s not a microscope. It has the same problem that any flag with text on it has, which is that it reads backwards half the time. But even then, at least the text is written in the Windsor typeface, which is what Woody Allen uses in the opening credits of his films. It’s not a bad flag. I’m really surprised there don’t seem to be any examples in downtown St. Paul. Even the relatively obscure Minneapolis city flag turns up in at least three locations in that city’s downtown. 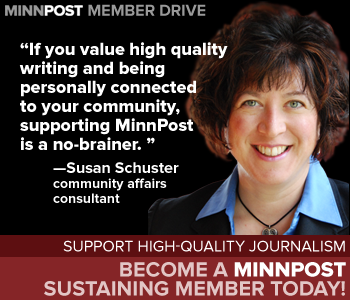 Have you ever spotted a St. Paul flag in the wild? If so, email me a photo of it at thestroll.mn@gmail.com. The first person to send me documentation wins a St. Paul-brewed beer of your choosing, at your favorite St. Paul happy hour destination, on me.

Aside from the puzzling absence of the city’s flag flying from any of her flagpoles, there are a number of other interesting banners to be seen downtown.

As a reminder of the city’s strong French Catholic heritage, the Church of St. Louis, King of France, at Cedar and 10th, flies both the French tricolor, as well as the yellow and white flag of the Vatican. On the white field is the papal tiara, and two keys connected by a red cord.

The Wells Fargo building at 7th and Wabasha flies a battery of international flags, including those of Canada, Japan, the UK, Thailand and Sweden. Nothing too out-of-the-ordinary about this, though it does seem peculiar that the Minnesota state flag flies at equal footing with the national banners.

In the realm of third “P,” you often see some fascinating flags at protests around the Capitol building. My favorite example of this is regrettably not one I saw in person, but that I came across on Fibonacci Blue, an excellent Flickr stream devoted to documenting all types of protests (both on the left and right) in Minnesota. It’s a flag that was flown as part of a Tea Party-oriented Tax Day protest outside the Capitol last year, and it has to be one of the greatest examples of vexillological folk art I’ve ever encountered. It’s the flag of the Soviet Union, with Minnesota’s state seal sewn into the center. Look! 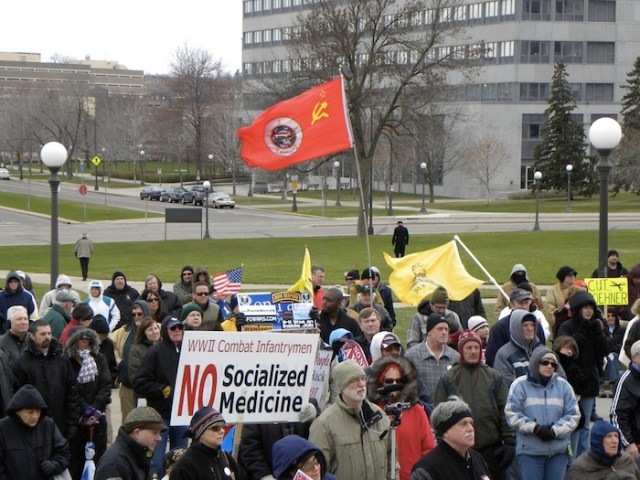 Regardless of what you think of this object politically – and I personally think it’s completely ridiculous – you must admit it’s an astonishingly striking piece of political hyperbole. It is a perfect distillation of the essence of the contemporary far right-wing narrative, elegantly expressed in one simple visual idea: The great state of Minnesota is being slowly turned, from the inside out, into a repressive Soviet-style socialist republic. And this was even in 2011, when the Republicans controlled the Legislature! To me and perhaps to you, this idea is, absurd, at best – after all, if Minnesota is indeed a secretly hard-core socialist nation-state, it’s surely the only one in the world currently considering “right to work” legislation. But as inflammatory and ridiculous as it is, it’s hard to deny that the flag packs a visual punch. It’s far more effective than a hand-lettered sign, or a historical curiosity like the Gadsden flag. As I said last week: flags are powerful. 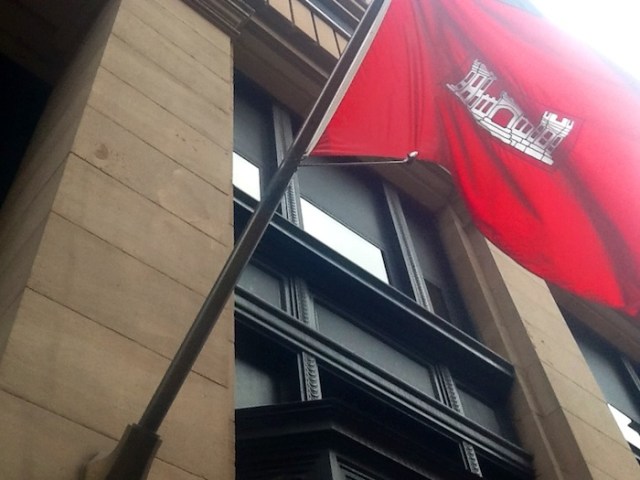 Lastly, in Lowertown, one comes across a flag that, all things considered, may be my favorite of all of these. It’s a simple one: the flag of the U.S. Army Corps of Engineers, flying diagonally from an unassuming brick warehouse, where its district offices are located. The flag is simply a red field with a white medieval castle in the foreground. The so-called “Corps Castle” symbol has been used since about 1840, and while the precise reason for the castle imagery is lost to history, one explanation is that it was adapted from a similar design used by French military engineers during the American Revolution.

As one might expect of an organization of perfectionist engineers, the flag is impeccably well-maintained. Coming through the canyon of warehouses along Fifth Street, you can see it from several blocks away, which is, of course, the point of any flag, regardless of what it represents.

You’ll see a multitude of flags in our capital, if not St. Paul’s