Here is one of my favorite non-dirty art jokes: A man walks into the studio of a celebrated sculptor in ancient Greece. He is amazed at how skillful and lifelike the sculptor’s work is, so he asks him, “How is it you make these wonderful sculptures?” The sculptor answers, “Well, I start with a slab of marble, pick up a hammer and a chisel, and then I chip away everything that doesn’t look like a naked dude with a spear.”

I like this joke not because it’s particularly funny – it’s not, despite the nudity and use of the word “dude” – but because it does make an important point about the nature of art-making. Art is created when, through an artist’s intention, nothing is transformed into something. You see a slab of marble, but you know there is a fully formed sculpture in there somewhere. This idea goes well beyond simple art objects, too.

Every weekday, I take the #53 bus from my home in South Minneapolis to work in downtown St. Paul, and then back again. The route goes down East Lake Street, and staring out the window I notice how many attractive vacant storefronts there are between Minnehaha and the river. There’s a surprising amount. The community in which this stretch of road sits, Longfellow, has always struck me as a good area for artists to live. Not ideal, mind you – it’s probably not dense enough to be a truly great bohemian enclave. But all in all, Longfellow’s got a lot going for it. It’s not expensive, there’s a lot of very attractive housing stock from the 1910s and ‘20s, it’s halfway between Minneapolis and St. Paul and easy to get to from anywhere, and right off both the Greenway and the easiest-to-use bus line in town, the 21. There are already some artist-friendly businesses: Northwest Graphic Supply, Hymie’s Records, Blue Moon Coffee, Merlin’s Rest. Most important, there are blocks and blocks of classic storefront retail space. If only five individual artists moved into five of these vacant spaces, devised ways to fund them, and did the most minimal coordination with each other, you’d be reading about East Lake art openings at least as much as in any other neighborhood in the city.

So in that spirit, the following is a field guide to the vacant storefronts of East Lake Street. There are many more, but these are the ones I find most appealing. Some of my favorite art projects in the Twin Cities right now, such as the Starling Project and the Whittier Storefront Project, are happening in and around storefronts. Storefronts are venues for potential transformation. Art can’t exist in a vacuum; it needs infrastructure to support it. And like the Greek sculptor in the unfunny joke, at least half of making art is recognizing where there is potential. There is nothing in the urban landscape that speaks more to inchoate potential than a vacant storefront.

MinnPost photo by Andy SturdevantEast Lake Street was once the automotive center of Minneapolis.

East Lake Street was, for some time in the postwar era, the center of automotive life in Minneapolis – it was wide and long and lined with fluorescent lights and perfect for cruising. To that end, it’s still occupied by dozens of mid-century auto dealerships, many of which seem to be dead or dying, or at the very least on life support. All Wheels (motto: “Your friendly neighborhood dealer since 1953”) and R.W. Auto Sales (the less snappy “We buy cars”) are both pretty representative. These buildings present an interesting challenge for any potential non-auto dealership afterlife: most of an auto dealership is obviously parking lots, with a tiny little building the car salesmen sit in. What can you do with that much asphalt, if not park cars on it? What can you do with that little indoor space, if not crowd two or three car salesmen inside, and have them smoke cigars and wait for customers to wander in?

I don’t have a great answer, but I will say I love these utilitarian, ramshackle little 1950s structures, as well as the tacky oversized signage that surrounds them. What can go on these sites next? Maybe a drive-in theater for people in the neighborhood. Maybe a micro-sculpture park. The great Museum of Contemporary Art Detroit is built on the site of a former car dealership. If any city knows how to transform the ruins of post-industrial auto culture into art, it’s Detroit. There’s a reason why the legendary musician Patti Smith said recently if she were a young person today, she’d move not to New York City but to Detroit – because artists are solving these sorts of problems better than anyone right now in Detroit. I’m not saying anyone needs to build a full-scale contemporary art center on East Lake, but I am saying that, as far as contemporary art is concerned, Detroit is a good place to look for ideas.

This is great, classic little storefront, halfway-ruined by an ugly vinyl awning and some unattractive cinderblock brickwork covering up the space where the original big glass windows must have been. Tear those things away, and voila, you’ve got the gallery / project space / print shop of your dreams. This is everything you’d want in a storefront. It’s light, accessible, and it even appears to be attached to a house.

MinnPost photo by Andy SturdevantWhat sign did this frame once hold?

I have passed this place a thousand times, and I am convinced that it might actually be the most wholly perfect storefront in the city of Minneapolis. Everything about it is gorgeous: the scale, the wood, the coloring, the brick, the interior, even that great, empty circular neon sign, waiting for someone’s circular neon logo to go inside of it. If I had an extra couple thousand dollars in my savings account, I’d be writing this to you from inside there right now. 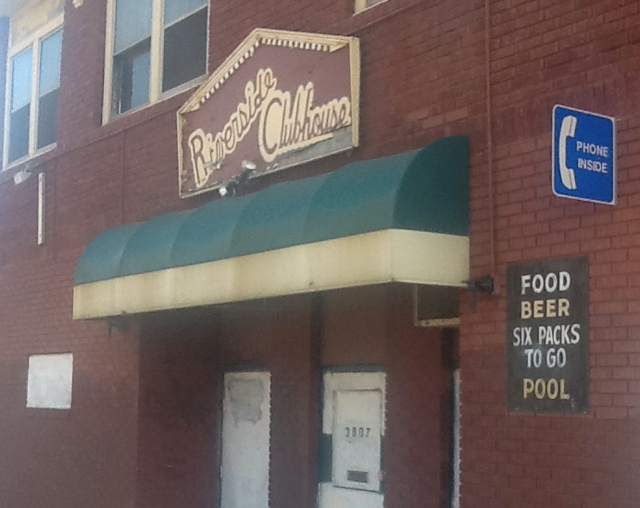 MinnPost photo by Andy SturdevantTrust me on this one: In the right hands, the Riverside Clubhouse is the Max’s Kansas City of the greater southside.

I have no idea what the story is on this place; it’s been apparently unoccupied for as long as I can remember. But what a classic façade! I can only imagine how great the interior must look. I imagine it’s a lot of dark wood, tin ceilings, and nicotine-stained linoleum. Here, more than almost any of these storefronts, is a commercial space begging for some love and attention. Keep the signage, including the one that brags about there being a “phone inside.” If you opened an artists’ bar here, I’d be in every day and twice on Saturdays. Trust me on this one: In the right hands, the Riverside Clubhouse is the Max’s Kansas City of the greater southside.

MinnPost photo by Andy SturdevantPlenty of space at 3815 East Lake.

A suite of structures once home to a woodworking equipment retailer that’s since relocated, I’m not sure how it’s all divided up. But white stucco, blue metallic sheeting, and white Helvetica is a classic exterior look, and there’s a lot of light and space.

OK, so this place was obviously a Taco Bell at some point. No getting around that. So honestly, I’m a little unclear what the next step might be. But I guess it’s got some value from a marketing perspective: “Oh, you know, it’s the place on East Lake that looks like a Taco Bell.” It is perhaps the ultimate entrepreneurial challenge – I don’t even know if the most brilliant artist in Detroit could think up a credible use for a former Taco Bell. But maybe this just demonstrates the limits of my own imagination.

A field guide to the vacant storefronts of East Lake Street