One of the best parts of early spring is taking the first trip on the Hiawatha light rail — which we may now appropriately refer to as “the blue line” — down to Minnehaha Falls for an afternoon of beer and fried fish and walking around in the outdoors. This past Sunday was Easter, and although it wasn’t even particularly pleasant out (hovering around 50 degrees), I had an out-of-town visitor in for the weekend, and got it in my head that she ought to see the falls on that holy day.

Spring doesn’t bring the sort of sustained, studied focus that results from being driven indoors in the winter — being outdoors, especially in a place like Minnehaha Park, makes for too many distractions to remain focused on any task more complicated than eating a fried oyster. Near where we were sitting, a gang of kids took turns smashing a piñata as a half-circle of adults stood around them, chanting; as soon as the piñata burst open, the kids ran in, grabbing up handfuls of candy, and then vanished from the scene completely, leaving just a dangling string. This trip to the falls has a similar quality. There is an intent focus on one object, and then we flit off instantly to the next thing to see. 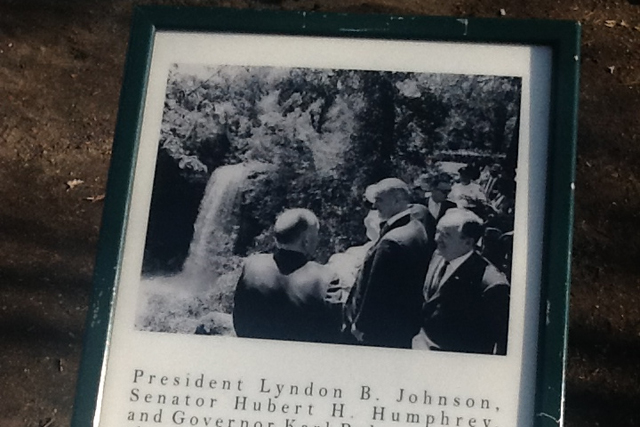 And there is a lot to see around Minnehaha Falls, both natural and man-made. One of the first objects you encounter walking toward the Falls themselves is a historic marker, commemorating a June 1964 trip to the site by President Lyndon B. Johnson, Minnesota Sen. Hubert H. Humphrey, and Minnesota Gov. Karl Rolvaag. In less than two months, Humphrey would be Johnson’s running mate, and LBJ would go on to win the presidency in November in one of the most lopsided victories in American electoral history.

The photo is attributed to simply “Minneapolis Tribune.” I tried somewhat lazily to find attribution for the individual photographer, but no such luck. He or she will have to remain anonymous, but to their credit, it’s the sort of quality photojournalist shot obviously made by a competent, efficient professional, the likes of which the local papers once employed in the dozens. I realize I am doing this anonymous professional’s legacy a terrible disservice by taking a photo of the original photo on the awful, blurry camera on my iPad.

The original is a picturesque shot of Humphrey, Rolvaag and Johnson looking down at the falls. “In order to create the beautiful display of the falls pictured here,” reads the inscription, “the city had to open many fire hydrants, upstream and out of sight, to feed water to the creek.” Johnson is ignoring Rolvaag and Humphrey, looking past the falls. As in any classic newspaper photo shot, there’s some psychological intrigue playing out in this arrangement. The now mostly forgotten Rolvaag’s back is to the camera, and Humphrey regards him with a characteristic good-natured guffaw. Towering over the Minnesota senator, Johnson’s steady gaze and wry grin oozes confidence and power, but also appears calculating, and even vaguely menacing.

Standing in Humphrey’s hometown, was Johnson reflecting in that moment on the man he’d pick for his running mate less than two month later? Says Robert Caro of the two men’s relationship in his 2002 can’t-say-enough-good-things-about-it LBJ biography “Master of the Senate”: “At the bottom of Humphrey’s character, as Johnson saw, was a fundamental sweetness, a gentleness, a reluctance to cause pain; a desire, if he fought with someone, to seek a reconciliation. … To Lyndon Johnson that meant at the bottom of Humphrey’s character, beneath the strength and the energy and the ambition, there was weakness.” 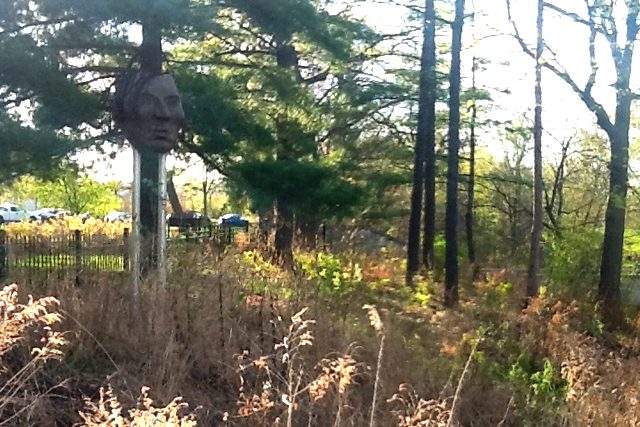 Also on the way is a sculpture by the New Mexico-based artist Ed Archie Noisecat, depicting Taoyateduta, the Dakota chief also known as Little Crow. So much of Minnehaha Park is rooted in romantic 19th century notions of nature, its sublimity, and the noble lives of the “savages” imagined to have lived there by Eastern writers like Henry Wadsworth Longfellow, who gives this part of Minneapolis its name, and whose epic poem “The Song of Hiawatha” gives both Minnehaha Park and Falls theirs. Longfellow casually studied some Ojibwe lore published in his lifetime, but the poem has very little to do with any of the actual lore of the Ojibwe – “Hiawatha” isn’t even an Ojibwe name. Noisecat’s sculpture depicts a mask, resting on pillars, looking resolute, but also, without eyes, quite blank. Noisecat seems to be inviting you, the viewer, to look through Little Crow’s eyes.

Little Crow himself was something of an enigmatic figure – a leader who was murdered by white settlers in retaliation for his participation in the 1862 Dakota War, he was a charismatic negotiator whose primary interest was in compromise and co-existence prior to the outbreak of violence. He was a figure who moved in both white and native circles who “refused to cut his hair and modified his dress as circumstances required … [who] understood English but was never heard to speak it in public,” according to historian Mary Lethert Wingerd. The sculpture commemorating him is a bracing corrective to the condescending, overblown romanticism of the park’s other native-themed sculpture, that of Minnehaha and Hiawatha by Norwegian-American sculptor Jacob Fjelde.

(On a flitting side note: I always find it interesting that so many late 19th century and early 20th century Minneapolis neighborhoods are named for popular literary figures of the preceding few generations – not just Longfellow, but also Whittier, Cooper, and Hawthorne. Would this be the equivalent of giving early 21st century neighborhoods names like Styron, Mailer, Salinger and Updike?)

Lastly, this is a good opportunity to reprint what I think is one of the most remarkable literary photos ever shot in this city: the great Argentine writer Jorge Luis Borges, on his 83rd birthday, in Minnehaha Park, as snapped by photographer Stuart Klipper in 1983. Borges stands in front of Fjelde’s sculpture of Hiawatha and Minnehaha. I first became aware of this anecdote from writer Brad Zellar, who recounted the scene in a 2003 issue of City Pages. Borges was in town for a lecture, and Klipper — as one often wants to do with an out-of-town guest — took him down to the falls. Klipper has given me permission to reprint the photo here.

I am not sure if Borges wrote much about Minnesota, but I am aware of some lovely passages he included in his 1967 “Book of Imaginary Beings,” a collection of short descriptions of mythological creatures. Appropriate for springtime and its wandering, shifting focus, Borges suggests that the book “has not been written for consecutive reading. … Our wish would be that the curious dip into it from time to time in much the way one visits the changing forms revealed by a kaleidoscope.”

So here is Borges, on one of the imaginary creatures one could encounter in the Upper Midwest, maybe in Minnehaha Park: “The wry mythology of the Wisconsin and Minnesota lumber camps includes remarkable creatures – creatures that no one, surely, has ever believed in. The Pinnacle Grouse had just one wing, so it could only fly in one direction, and it flew around one particular mountain day and night. The color of its plumage would change depending on the season and the condition of the observer.”

At Minnehaha Falls you can see LBJ, Little Crow and Jorge Luis Borges