The city around you is largely unannotated, and that’s one of the best parts of walking through it each day. Where did that graffiti come from? It wasn’t there yesterday, and it’ll be gone next week. When was this building built? Who art-directed all those weirdly gorgeous VISIT MONTANA ads that have been all over mass transit for the past year?

These are questions to which you can find answers if you’re willing to put in some work, but for the most part, you don’t have time to investigate every little thing you come across in your daily walk through the built environment. It’s a joy to have these small mysteries in your daily experience, and until those Google virtual reality goggles are standard issue, you’ll always be able to find some piece of visual culture that, for one reason or another, is completely inexplicable.

There are two such items of note that fit into this “unannotated”/ “inexplicable” category within a few blocks of each other on 4th Street in downtown St. Paul, between Wabasha and Sibley.

The first is outside the historic Minnesota Building. It’s one of the oddest and most charming window displays I’ve ever seen. There are two versions of it — one on the entrance on 4th Street, and the other on the entrance on Cedar. 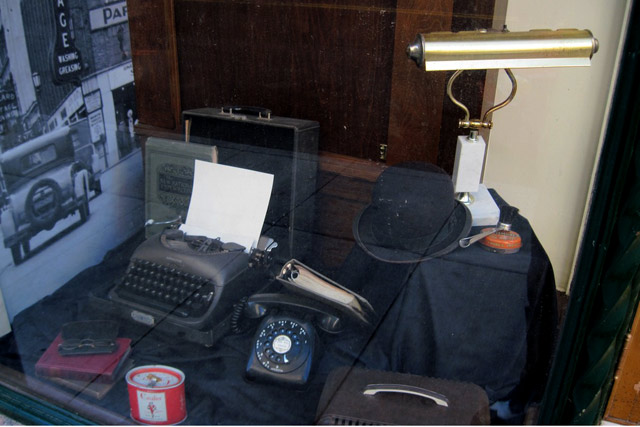 MinnPost photo by Andy SturdevantBehold the office equipment of the past …

In each, there are two displays windows per entrance, one flanking either side of the door. On the left side window, there is a display of vintage office equipment. In there are some carefully arranged items, such as a typewriter, some ledgers, a rotary phone, even a bowler hat and some pince-nez eyeglasses. On the right side is a similar display, but with “contemporary” office equipment — a fax machine, a keyboard, and some manuals for the 2002 version of Microsoft Outlook, carefully stacked atop one another. In each window, they’re arranged on black fabric-draped blocks, as in a museum. 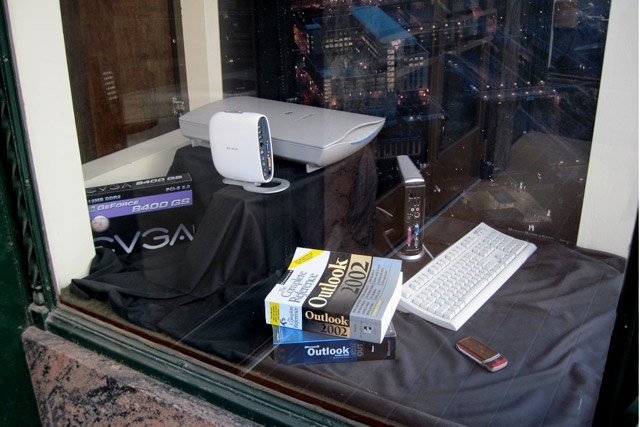 MinnPost photo by Andy Sturdevant… and the (sort of) present!

Such is the progression of technology, however, that the “contemporary” equipment looks nearly as outdated as the typewriter, and not nearly as attractively designed. In fact, it looks downright dumpy. Behind the antique displays are aerial black-and-white photographs of St. Paul in the 1940s, a vision of metropolitan, streamlined modernity. Behind the contemporary displays are another nighttime aerial shot, this one in color. But it’s not a vibrant, glass-and-steel depiction of present-day downtown St. Paul proper. It’s the I-94 exchange by John Ireland Boulevard, a visually incomprehensible cluster of on-ramps and off-ramps lit by a thousand tiny little headlights stuck in a mid-winter rush hour. It’s not a very inspiring scene.

I thought initially it must be an art project of some kind, a compare-and-contrast exercise in the elegant, functional glories of the past, and the crudbucket reality of early 21st century office life. Having passed it a few more times and reflected on it at considerable length, however, I am pretty certain it’s not an art project, at least not in the strictest sense. I think it’s a promotional display meant to drum up interest for vacant office space in the building. I believe the idea it’s expressing is this: the Minnesota Building offers the elegance of the mid-20th century with all the high-technological conveniences of the 21st.

That may be, but it’s such a lopsided affair that I have to believe the anonymous window designer that created this display didn’t really have his/her heart in the 21st century at all. The old equipment just looks so much nicer.  More functional, better designed, more lovingly arranged atop the black fabric in the window.

In fact, the window dresser has thrown in a radio and a box of cigars on the old-timey side, with no entertainment-related equivalents on the contemporary side. “Look at what a grand old time we used to have,” it seems to suggest. “Objects were better-made, we could smoke cigars indoors, and we wore our bowlers everywhere.” The contemporary side, with its sad, monochromatic plastic office appliances, looks like the least amount of fun imaginable. “Yeah, I’m going to need you to read this 700-page manual on Microsoft Office,” it says to you, in a Bill Lumbergh voice.

I mean, where would you rather be?

Again, I suspect this must have been an intentional choice on the part of the artist. I choose to believe it’s a not-so-subtle bit of social commentary, snuck into someone’s work assignment. It’s a beautiful, odd little piece of commercial artwork, and you should go see it next time you’re in downtown St. Paul.

The other unannotated sight involves the façade of Señor Wong, an Asian-Mexican fusion restaurant catering to the Ordway and Xcel crowds. The exterior is a quintessentially charmless cement chunk with some standard brickwork, unremarkable except for one amazing feature: seven heads, made of red sandstone, staring out over seven windows with buzzing neon beer signs in them. 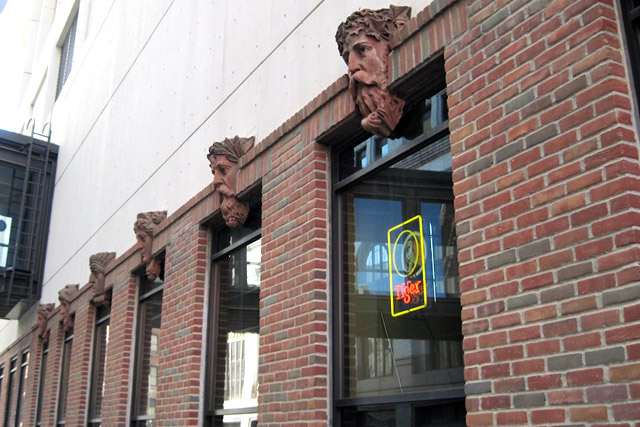 Of the seven, five seem to come from antiquity: bearded gods and heroes. One is a Native American face in a headdress, and the last is the face of a Theodore Rooseveltian gentleman, mustachioed in the fashion of the late 19th century. Seeing these faces and realizing I knew generally what they represented without knowing precisely whom they represented made me a little sad. I knew they were probably Greek gods, or heroes, but I don’t recall enough of my Edith Hamilton to tell you which was which.

I expect an educated person, at the time of the vanished building’s construction, could have told you the figure with the headdress made of a lion’s head was probably Hercules, because it was he who slew the Nemean lion, and then made a cape from its skin. I didn’t know that myself — I Googled “greek mythology lion” until I figured out the answer.

According to Larry Millett’s AIA Guide to the Twin Cities — a truly indispensable reference work for those wishing to annotate their urban surroundings, and a resource without which this column would be almost impossible — these heads once decorated the Germania Life Building on this spot, built in 1889, and demolished in 1970. In their current state, hovering between beer signs and concrete, these heads look truly strange, like disembodied, floating faces from the distant past completely lost in time.

I don’t necessarily believe the Minnesota Building’s anonymous window artist that the past was always superior — I am glad, for one, to not have people smoking cigars in my office all day. (I am also glad I didn’t die of measles as an infant.) But I did feel a tinge of regret in seeing these mysterious heads, and realizing that these cultural references, which at one time wouldn’t have needed annotations, are now a complete mystery to most people who pass them by.

Taking in the unannotated sights of downtown St. Paul