You can learn a lot about your own city by spending some time in another, especially if it’s a city that seems to share some basics in terms of size, history and population. I spent part of the past week in St. Louis, Mo., at an arts conference, and so I thought it would be enjoyable to report some of my findings here in brief — to stroll through parts of St. Louis and find out what relevance they might have to my own regularly scheduled strolls here.

For starters: Visiting St. Louis, one realizes how vague and ultimately meaningless labels like “Midwestern” and “heartland” are. St. Louis, like our two cities, is both a Midwestern and heartland city, but the two metro areas have very little in common. Minneapolis-St. Paul and St. Louis share “heartland,” “Midwestern” similarities only in the same sense that Portland, Maine, and Baltimore, Md., could be said to be practically indistinguishable as “East Coast” cities. We share the Mississippi River with St. Louis, and some overlapping German heritage, but little else. 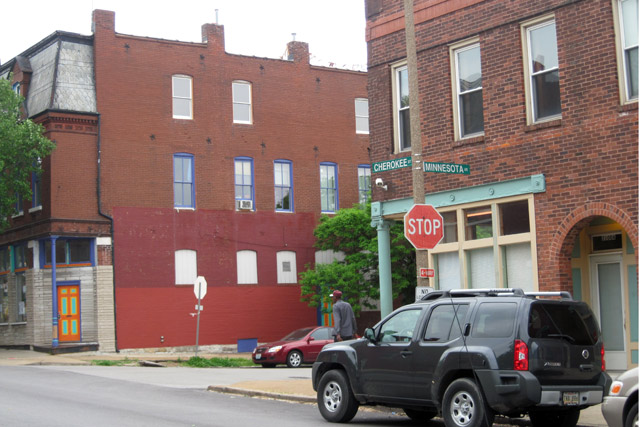 MinnPost photo by Andy SturdevantRed brick, like that at the corner of Minnesota and Cherokee, abounds in St. Louis.

St. Louis is much older, with a denser infrastructure, and with much more red brick everywhere. There is a certain muddy Mississippi River thickness hanging in the air that seems unfamiliar where we are, closer to the headwaters.

For my stroll, I have a great pair of guides: two local artists named Juan William Chávez and Kiersten Torrez. The week before my arrival, it had been announced that Chávez has received a Guggenheim creative arts fellowship for his work around St. Louis. For several years, he’d run a gallery space called Boots, and since 2010, has been involved in a project called the Northside Workshop, a community arts initiative that works with educators, urban planners and community residents in the Old North St. Louis neighborhood. His latest project sounds like the most exciting yet: creating a bee sanctuary on the site of the infamous Pruitt-Igoe housing development.

As unpleasant and painful as Minneapolis’ considerable urban-planning debacles of the ‘50s and ‘60s were, they pale in comparison to those of St. Louis. If you’ve taken an intro-level architectural history course, you probably remember the story of Pruitt-Igoe, the modernist fever dream of a public-housing-project complex that was built in 1954 and was so troubled that it had been demolished by 1972. It is remembered today primarily as a highly visible symbol of the failures of modernism and urban renewal.

Several times in the course of our afternoon, Juan called this approach “the big fix,” an idea he believes is rooted in St. Louis’ government and civic institutions’ leadership style. It’s an approach that suggests complex social problems are easily solved with one enormous, expensive, top-down gesture.

Pruitt-Igoe’s architect was the late Minoru Yamasaki, best-known for his work on the World Trade Center’s towers 1 and 2. If you were a city planner in the postwar era, and you needed someone to come in and impose a gleaming, orderly modernist vision over a rowdy, idiosyncratic piece of the urban fabric, Yamasaki was your man. He even did it here in Minneapolis: He was the architect behind the ING Building, that soaring, cathedral-like temple to insurance on Washington and Nicollet that was meant to be the high modernist crown jewel in Minneapolis’ slum clearance plan in the old Gateway District.

Juan and Kiersten take me to the site, and it’s unreal — it looks like an old-growth forest in the middle of a city, only barely hemmed in by a chain-link fence. Occasionally, an original lamppost from the housing project will peek out over the trees. (You can see the scene from above in satellite view on Google Maps for an idea of the extent of this inadvertent urban forest.) Chávez visited the site in 2010, and instead of ruin porn, saw something much more interesting: “What was once an unnatural environment for one had become a natural habitat for another. I saw bees.”

There certainly is a parallel in the decline of American inner cities and the recent decimation of bee populations related to colony collapse disorder: how complex social systems can fall apart quickly and completely. The Pruitt-Igoe Bee Sanctuary will be a one-of-a-kind interdisciplinary urban agricultural project that will bring together artists with students, neighborhood families, educators, kids, farmers, restaurateurs and food activists on this historic site.

After seeing Pruitt-Igoe, Juan and Kirstein take me down to Cherokee Street, in the southern part of the city, where their studio is located. The neighborhood is home to a large brewery complex, very reminiscent of the old Hamms’ Brewery in the East Side of St. Paul. Artists’ studios now occupy the warehouses. Down the street from the complex, Cherokee Street is lined with small storefront spaces, pop-up galleries, and hastily labeled doorways leading up to second-story apartment galleries; there are music venues and print shops, with names like PhD, Pig Slop, Fort Gondo, and Firecracker Press. Many of them are less than a few years old. 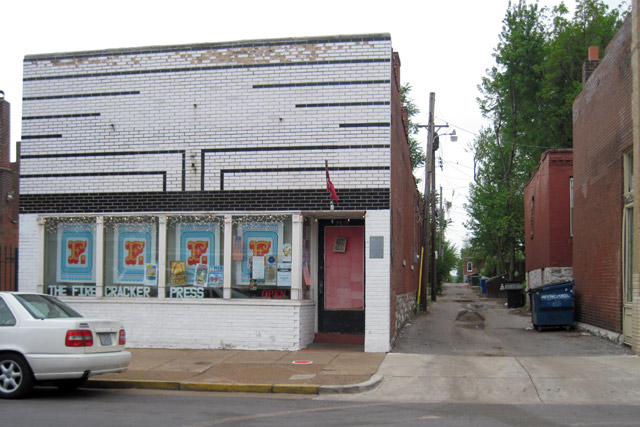 What’s so striking about St. Louis is how impossibly gorgeous the physical infrastructure of the city is — each of these spaces is located inside a gem of a building, with ornamental flourishes, terracotta facades and stunning brickwork. Even the best-preserved commercial districts in St. Paul don’t come close to matching the sheer density. As in other parts of the Rust Belt, these spaces were built with great confidence. That confidence reflected the energy and optimism of a metropolis that, in the late 1800s, seemed well on its way to taking its place among the great global cities. It’s the knowledge from where we stand now of what happened next that drives people to shoot a hard drive’s worth of ruin porn and call it a day.

Whenever I travel to another major American city, I am often overcome with what you might call “Situational Urban Projection Derangement Disorder.” Regular readers will know I am generally a pretty excitable person, particularly where artist-led projects and urban spaces are concerned. So upon encountering artist-led projects and pleasing urban spaces elsewhere, my first thoughts tend to be, “This is wonderful! Why aren’t we doing something like this back in Minneapolis? We should do something like this back in Minneapolis!”

The fact is, there are numerous interesting artist-led projects happening all over the Twin Cities, addressing our own past and future. Juan, Kiersten and I bid farewell, promising to make plans to start up some inter-regional MSP-STL initiatives in the future. What I like most about St. Louis is many of the artists’ careful attention to history, and the sense that they are stewards of a legacy — whether that legacy is the memory of some of the most notorious failures in American urban history, or the inheritance of some of the most beautiful urban architecture in the world. They are stewards of that legacy, whatever it might be, and it’s a job they take seriously.