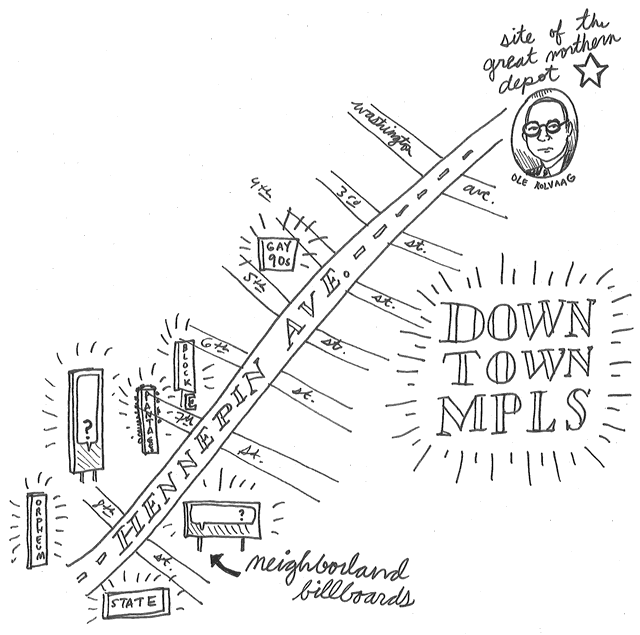 A few years ago, I read “The Boat of Longing,” Ole Rolvaag’s 1921 saga of a young Norwegian immigrant making his way through hardscrabble early 20th century Minneapolis. It’s full of beautiful and sad images, but one particular passage from near the beginning has always stuck with me. The protagonist, Nils, has just stepped off the train for the first time, at the Great Northern Depot that used to stand across the street from the downtown Post Office by the Hennepin Bridge:

Out on the sidewalk Nils paused. He had to look about and greet the place. The lights along Hennepin Avenue twinkled festively; they resembled two rows of pearls hung out on both sides of the street. Just a few steps below him ran the river; he knew its every bend as far as the Washington Bridge. He felt at home there on the sidewalk, was a part of the metropolis which now lay in peaceful morning sleep. Something within it was his; he belonged here!

I think of this passage whenever I walk downtown Hennepin Avenue, especially at night, when all the neon is lit up and people are out in large numbers. You will always belong on Hennepin Avenue because everyone belongs on Hennepin Avenue. More than any other stretch of road in the Twin Cities, Hennepin Avenue is the one that everyone can lay claim to, the one that everybody imbues with their own mythical qualities. It’s the oldest, it’s the most famous, it’s the most crowded, it’s the one all the semi-famous songs are about. It’s one of the few places where the city’s social stratification levels out somewhat – you can see people in all income brackets, walking past one another (if not directly interacting).

If there were such a thing as the Minneapolis Dream, Hennepin Avenue is where you’d imagine it coming true. That dream could be anything from appearing onstage at the State Theatre with Garrison Keillor and singing Andrews Sisters numbers to punching a drunken off-season lumberjack in the face at Moby Dick’s. It’s up to you. Hennepin is big enough to accommodate all kinds of dreams.

Last Saturday night, I was walking down Hennepin, eating an enormous slice of pizza from that take-out place near the LRT platform and enjoying being swept along by a steady stream of screaming teenagers and people leaving shows and piling into restaurants. Hennepin’s signage is unlike anywhere else in the city – complete visual overkill, in the best way. There are enormous digital billboards abutting ancient, buzzing neon signage that’s new, new-but-made-to-look-old, and actually old (a personal favorite in the latter category is the neon sign for the Happy Hour atop the Gay 90’s complex, written in that wacky early ‘60s let’s-have-a-martini typeface).

It’s against this chaotic backdrop that a New Orleans-based artist named Candy Chang has placed her new work. In coordination with Forecast Public Art, the Hennepin Theater Trust’s Plan-It Hennepin initiative, and Clear Channel MSP, Chang has created a series of eight interactive digital billboards as part of her Neighborland project, in both Minneapolis and St. Paul. Three of these billboards are located near the intersection of Hennepin and 7th Street. They went live Thursday after midnight.

MinnPost photo by Andy SturdevantWhat do you want in Minneapolis?

The billboards ask, “What do you want in Minneapolis?” They then read, “Let’s build our city,” and ask the viewer to visit neighborland.com. On the website, the public enters ideas for things they’d like to see in the city – types of art, infrastructure, public interactions, whatever they can think of – and over the course of the next month or so, the ideas will be flashed on the billboards.

On Saturday night, I barely noticed them at first, actually, despite having heard about (and unfortunately missed) a talk by Chang at the Walker on Thursday. The ads are well-designed; they’re simple green-and-white and use a nice, rounded sans serif typeface. Digital billboards, of course, cycle through a number of ads, and Chang’s messages fit right into the visual language of most advertising. It’s so seamlessly integrated into the visual background of the scene around me that I missed it a few times before registering it. What this really means is that the work is right at home on Hennepin Avenue. Anything on Hennepin Avenue needs a few glances before it completely registers.

It’s an unabashedly idealistic project. Chang’s idea is that people will see these messages and start sharing ideas with one another. From this public exchange of ideas, with the results being broadcast from high atop the corner of 7th and Hennepin, people are inspired to take action and transform the city they live in.

Again, this strikes me as very appropriate for the road these billboards are located on. Like Rolvaag’s Nils, stepping off the train and marveling at the lights of Hennepin Avenue, and then imagining himself for the first time as a Minneapolitan and an American, there is a sense that transformations can happen right on that street. Hennepin has long been a laboratory for the transformation of cities – and not always in the best ways. Hennepin’s been a place where truly big projects have been undertaken. Some successful: the amazing feat of moving the Shubert several blocks and its transformation into the Cowles Center. Some more ambiguous: the ongoing Block E boondoggle, and the destruction of the city’s poverty-stricken, booze-drenched (and historically significant) Gateway District.

So many of the ideas that have shaped Hennepin Avenue have been big ideas, top-down ideas. The appealing aspect of Chang’s methods are that they encourage small, bottom-up ideas, hatched by whoever wants to take the time to voice their opinion on the Neighorland website.

As the project continues, I’ll be curious to see what sort of ideas make it to the billboards. I’ll hope to see complex, off-the-wall, inspiring, and even plain disagreeable ideas expressed. Hennepin Avenue is a bizarre, wonderful jumble of ideas, experiences, sights, sounds and narratives. Everyone has a stake in it. It makes us think to ourselves, as Nils thought to himself, something within it is ours; we belong here. Let’s hope our public conversations rise to that challenge.

Amid the jumble that is Hennepin, an invitation to Neighborland