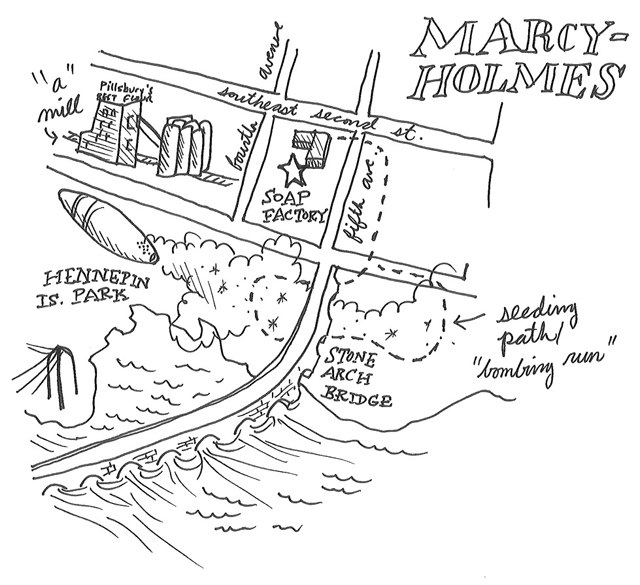 MinnPost illustration by Andy SturdevantIf you live in Minneapolis, on some level it’s because of flour.

It’s kind of touching to think that if you live in Minneapolis, on some level it’s because of flour. Not in an abstract way, but probably in some quantifiable, directly verifiable way.

The waterpower of the St. Anthony Falls made large-scale flour production possible, and during Minneapolis’ industrial heyday, its mills turned out the flour that made the food that fed most of the continent. Timber was the city’s first industry, but it was flour that put Minneapolis on the map.

Think of why you, or your ancestors, came to Minneapolis to begin with, from the coasts or the South or Asia or Europe or Africa. School, business, arts, social services, media: flour funded all of it. From the 1880s through the early parts of the 20th century, when Minneapolis was becoming Minneapolis, flour made the city very wealthy (as well as individuals with still-familiar surnames like Pillsbury and Washburn).

The institutions that attracted you or your ancestors here were probably created as a result of that money, and if not the institutions directly, then institutions somehow dependent on them. Without flour, Minneapolis might have been another pleasant, sleepy Mississippi River town, like Dubuque or Davenport.

This is oversimplifying things greatly, I know, but it’s not difficult to believe your ancestors might have thought, “No real reason to come to Minneapolis,” and stayed on the train or boat or interstate or however they got here, and wound up further west. Maybe we’d all be sitting in our offices and homes in Denver, Kansas City or Seattle reading ColoPost, MOPost or WashPost. All because of flour.

So whenever artists deal directly with that legacy, I like to take notice. In the heart of the old east side milling district, at The Soap Factory gallery and project space, two artists named Amber Ginsburg (based in Chicago) and Joseph Madrigal (based in Michigan) are finishing up a five-week residency project entitled “FLO(we)[u]R” that draws directly on a fascinating footnote about flour’s role in World War I. (And in the interest of full disclosure, I should mention here that I have been involved in numerous projects at The Soap Factory as an artist, curator and volunteer for many years.)

In the earliest days of aerial combat, American pilots needed a way to test their bombing aptitude during training runs. A terra cotta company in the industrial hinterlands of New Jersey developed terra cotta dummy bombs that could be filled with flour and, when dropped from a plane, would mark the bomb’s impact in a way that could be easily seen from air. The company manufactured hundreds of these bombs, which were then used by the military – the flour that filled these bombs would almost certainly have come from Minneapolis, which even at the end of the 1910s was still the dominant flour producer in the U.S. All of the major mills surely would have had government contracts.

These terra cotta bombs were promptly forgotten once the war ended and more sophisticated bombing calibration techniques were developed. Pallets of them were only discovered decades later. Ginsburg came across a reference to them in, of all places, an academic journal on clay, and thought it sounded interesting. After some investigation, she found the original blueprints and started devising an idea.

What she and Madrigal have done at The Soap Factory is create a fully functioning factory floor, where they, interns and any who want to come in during regular gallery hours to manufacture terra cotta bombs. Almost everything is done on site — the clay is mixed outside, carried in, pressed into molds, and placed in racks to dry.

Flour will still be inserted into these bombs, but it will be mixed in with something else — seeds for white blooming flowers, along with clover and foraging plants. Visitors can then put themselves in the place of those aerial bombardiers, and take the bombs out into the city to calibrate their own targeting instincts and disperse as they wish. The terra cotta is air-drying, and so the shards will break down quickly once the bomb hits its target, and the seed mixture will either take root in the soil, and or be spread by birds.

The artists have also prepared a number of kiln-fired bombs with holes drilled in them and straps around them for easy handling. Visitors can fill them with the seed mixture of their choice, leave a driver’s license for a security deposit, and take this bomb out into the city’s lots, parks and in-between spaces to disperse the seeds wherever they wish.

The so-called “Gallery 1” in The Soap Factory is a legendarily difficult space. Quite a lot of the work that goes in there is eaten up entirely by the vastness of the room. The best pieces I’ve seen in there over the years — a free-floating, multi-screen video installation by Traci Tullius, an overwhelmingly massive inflatable sculpture by Clive Murphy — are the largest ones with the highest degrees of complexity.

This piece may be the best use I’ve yet seen, though, since it in fact uses the space for its original purpose. The whole room hums with a sense of industry, even when there are only two or three people at work. The way the bombs are stacked, several high and dozens wide, is both sinister and striking in its uniformity. Factory work is drudgery, without a doubt — something one is reminded of after spending an hour assembling bombs. But there is something exciting about taking earth, the rawest material there is, and wrestling into a sleek, modern-looking object.

MinnPost photo by Andy SturdevantEven a hundred years later, evidence of the milling industry is still pervasive in Minneapolis.

A few weekends ago, I checked out one of the bombs and walked around the mill district down by the river, shaking some urban foraging mix into Hennepin Island Park. Even a hundred years later, evidence of the milling industry is still pervasive.

As I wrote last week about a different part of town, there is no other city in America where the industrial structures of milling and grain so dominate the physical landscape. To see mills and grain elevators and storage bins against the skyline is to know you’re in Minneapolis. The falls still churn away.

Ginsburg and Madrigal’s piece is about transformation.

They’re taking the outmoded technology of warfare, created to devastate entire cities, and using processes that skirt the delicate lines between craft, artisanship, industry and art to transform that technology into something that will, in a small way, improve cities devastated by economic violence. They’re empowering the user to create a new type of urban landscape, one that seems to me to be defiantly 21st century.

Walking around the park, under the shadow of the Pillsbury “A” Mill and shaking my seed mixture out, I wonder how these industrial landscapes that are so responsible for the city’s civic identity will be transformed in coming years, and the roles that craft, artisanship, industry and art will play.

It’s an amusing irony, I think, that the exhibition is, for a few weeks, one of the few fully functioning factories in this old factory district.