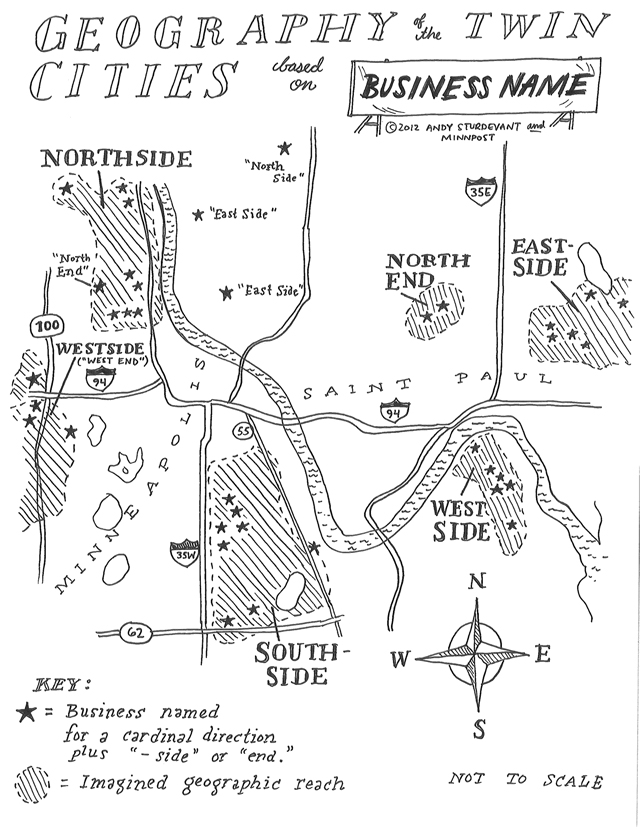 It rained all weekend, as you probably know, and as much as I wanted to stroll through Whittier and see the tour of the Artists in Storefronts project, or report on the May Day Parade, it just couldn’t be done.

I like listening to rain, like any dreamy, impractical romantic, but I don’t like walking around in it wearing canvas shoes and carrying a camera and being drenched. (Which is odd, because I love stomping through a snowstorm taking photos, but rain seems somehow more fundamentally unpleasant.) Many people in town generally seem to be in agreement with me, as both of the aforementioned events were postponed until next weekend. So this past weekend, during optimal strolling times, I mostly stayed inside. I’ll report to you on the storefronts and the parade in the next couple of weeks.

Instead, I took a walk through my neighborhood, down Chicago Avenue, after the rain let up on Sunday. I’d always noticed the many storefront signs for businesses with the word “southside” in the name. I’m interested in how neighborhoods think of themselves in relation to geography, especially when they’re identifying with a part of town that doesn’t have an official, city-sanctioned designation like “Uptown” or “Northeast.” After seeing some of the signage in the southside, I thought it might be enjoyable to work my way out from there, identifying other businesses that are named for cardinal directions. The finished result would be an Illustrated Map of the Psychocommercial Geography of the Twin Cities. And, for perusal now or on an upcoming rainy day, here it is!

City neighborhoods usually orient themselves as “ends” or “sides” or “towns”; the preferred nomenclature in Minneapolis seems to be “side.” Minneapolis is a tall, narrow city, running primarily north to south. From the westernmost point on Lake Calhoun, down Lake Street to the start of Marshall Avenue Bridge, it’s only about 5 miles across. Therefore, there’s really no such thing as a “west side of Minneapolis” or “east end of Minneapolis,” because if there were, those areas would be, at their longest, only 2½ miles wide. If someone tells you they hail from “east Minneapolis,” you know it’s a mistruth on par with being born and raised in South Detroit.

There are a few exceptions, of course: near Lowry Avenue and Central Avenue, you will find the East Side Food Co-op, which is, as far as I can tell, the only business in Minneapolis self-identifying as eastern. (This is perhaps a callback to the days in which the milling district on the east bank of the falls was known as “East Minneapolis,” but that designation is as long-gone as the old Minneapolis East High School, which once sat on the site of that large blue Byerly’s on University.)

On the other side, there are parts of the first-ring western suburbs that seem comfortable self-identifying as western, in relation to the city: in St. Louis Park, you can find Westside Volkswagen and Westside Redi-Mix, and of course The Shops at West End. On Main Street in Hopkins, you can buy vitamins and fruit juices at Westside Natural Health Clinic, which is somewhat fitting, as Hopkins was originally known as “West Minneapolis.” 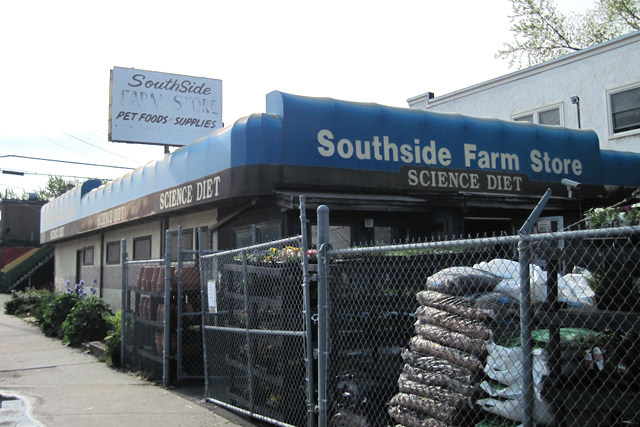 The other two cardinal directions, however, are full of claimants. In the southern part of the city, there don’t seem to be any “south end” businesses (and of course, “Southtown” is a mall). But there are dozens and dozens of “Southside” businesses: just a sampling might include Southside Farm Store, Café Southside, Southside Food and Deli, and Southside Auto. Southside’s nomenclatural influence stretches almost as far as the airport: The two southernmost points are perhaps Southside Chiropractic at 55th and Chicago, and Southside Hair and Barbershop at 60th and Portland, though there’s a smattering of australian (small “a”) businesses throughout Bloomington as far south as the Minnesota River. But for the purposes of our map, the businesses of Minneapolis are generally in agreement that the Southside is bounded by Lake Street at the top, 35W and Hiawatha Avenue on either side, with the Crosstown at the bottom. 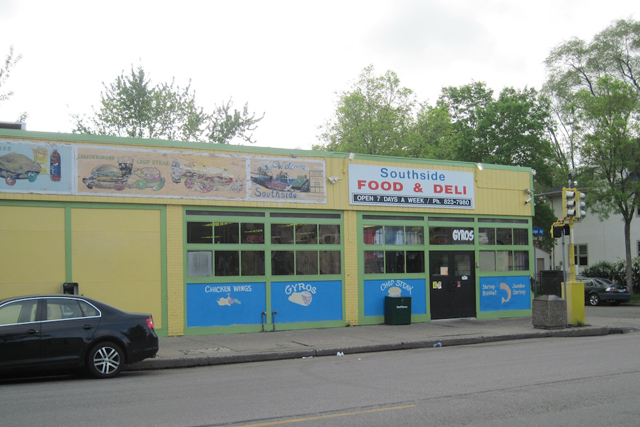 The Northside is similarly well defined. Most of the businesses self-identifying as “Northside” would go on our map somewhere inside the rectangle created by Penn Avenue, Plymouth Avenue, 44th Avenue North, and Lyndale Avenue North. Those would include but are not limited to the Northside Garage, Northside Food, Northside Printing, Northside Auto, and Northside Chiropractic Clinic. There is only one exception to the “side” naming convention: near Penn and Lowry you will find North End Hardware. (In the north as in the south, “Northtown” is another mall.) There are some outliers, of course: Northside Oriental Market is on Hubbard Avenue in Robbinsdale, and there are a few others in Brooklyn Park and Fridley.

St. Paul is its sibling’s geographic opposite: a long, squat rectangle, running east to west and only a little taller than Minneapolis is wide. St. Paul’s geographic eccentricities as they relate to the cardinal directions are well-documented: suburbs called West St. Paul (south of the city) and West St. Paul (east of South St. Paul). Each of those has their own like-named businesses, of course.

But in St. Paul proper, we find few businesses named for a northerly or southerly orientation. There is no apparent “Northside” in St. Paul, save one lonely outlier, New Brighton’s North Side Electric, which is right between the northern parts of both cities, and could really refer to either. The North End, on the other hand, is a recognized neighborhood, with its own businesses, such as North End Self-Storage. Southern-themed business names are sparse: a few “Southside” businesses scattered outside the city limits in Inver Grove Heights and South St. Paul. In addition, there is a mysteriously named Southside Crane Services in Shoreview, nearly twenty miles north of the city. Maybe they mean the Southside of Arden Hills.

However, our map for the east and west sides of the city are both well populated. The eastside of St. Paul is rife with commercial activity: Eastside Thai, Eastside Liquor Store, Eastside Floral, Eastside Towing, Eastside Pizzeria, all located generally in the Payne-Phalen neighborhood between Maryland Avenue and Phalen Boulevard.

The same is true in the occident as well, though the Westside of St. Paul is located, of course, south of downtown. There’s Westside Dental, Westside Haircare, and, further down, West Side Lanes, all generally located south of the river around Cesar Chavez Street and Highway 52.

For our next Psychocommercial Geography, perhaps we’ll look at the region as a whole and focus on the signage of businesses that identify themselves with the “Northwest” vs. those that identify with the “Midwest.” That would probably make for a good rainy day activity, too.