As my MinnPost colleague Marlys Harris wrote in her Cityscape column a couple of weeks ago, Hiawatha Avenue is sort of a bummer. There’s not much hope for it, at least not as a thoroughfare you might actually walk down and enjoy — I recall a drawing by the Minneapolis artist Andy DuCett from a few years ago depicting the crossing at 38th Street, with the following legend scrawled in lowercase letters over it: “if the traffic lights on hiawatha were employees, they would be fired. check: yes _______ no ______.” That’s the way most people think of Hiawatha: a place where you sit at a red traffic light that seems to be measured in geologic time. 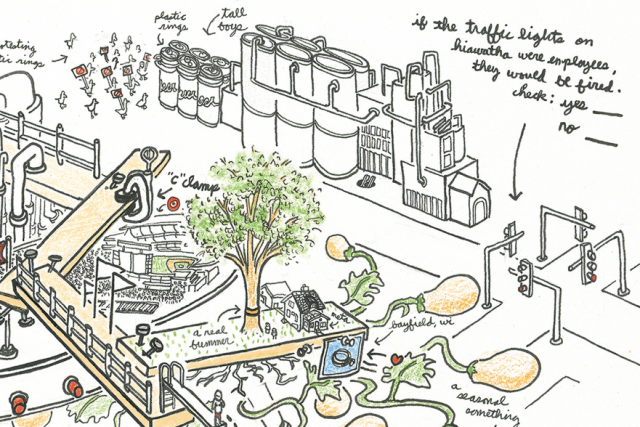 And they’re right to think that, of course. Hiawatha is unquestionably the worst place in town to get caught at a red light. The corridor wasn’t built to be much other than a place for trains to load and unload their shipments under the enormous grain elevators that line the avenue. So unless you’re the engineer of a Chicago, Milwaukee & St. Paul Railroad locomotive carrying 25 railcars of hard red spring wheat from the west, you’re probably not getting the most out of your experience of using Hiawatha Avenue. The light rail that runs up and down it roughly mimics the old “8” streetcar line that ran from Fort Snelling out to Plymouth, but it’s never been a particularly dense, pedestrian-friendly area. Hiawatha, as Harris points out, will never be Minneapolis’ Champs Elysée or Avenida 9 de Julio in Buenos Aires.

However, it’s not just Hiawatha running along that corridor. Cutting diagonally through south Minneapolis alongside it are Minnehaha, Snelling and Dight Avenues. These are three streets that are as walkable as Hiawatha is not. They’re perhaps the most perfectly Minneapolitan streets, from a visual perspective – it’s those grain elevators that tower over the neighborhood. In no other part of the country are grain elevators such an integrated part of the urban fabric. You can look up at those elevators and know you couldn’t be in any other city in America.

The neighborhood, too, is a mix of residential, industrial and commercial. Snelling and Dight in particular are lined with businesses with almost comedically old-school names: Woznak Stampings, the Crosstown Sweeping Corporation, Industrial Plastics of Minneapolis, Inc. They sit side-by-side modest prewar cottages, once owned and rented by the workers that staffed the nearby railyards and industrial plants.

Nearby on Minnehaha is all sorts of evidence of artists afoot: the great Trylon microcinema, the XYandZ Gallery, and Peace Coffee, whose store is named Wonderland Park for the early 20th century amusement park located nearby, and whose back wall features a hilariously gory stencil painting by noted muralists Broken Crow. Further down, there’s the Minnehaha Free Space, a community resource center where I wander in, browse their extensive zine library, and buy a copy of Cometbus for the price of a $1 donation. These are all worth writing about later on in depth. 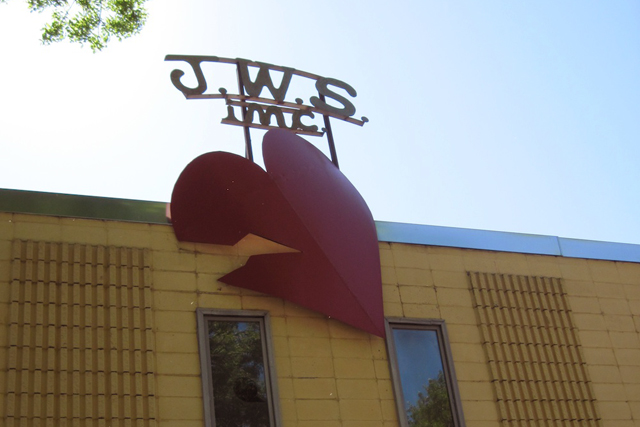 But there’s one site I come across, right in the middle of this corridor, that seems more interesting than anything else in the neighborhood. At 3528 Snelling Avenue sits a yellow two-story cinderblock building housing John’s Welding Service, Inc. The building looks like it was built in the 1950s or ‘60s; the same lot contained residential housing on it in the half-century before John moved in. 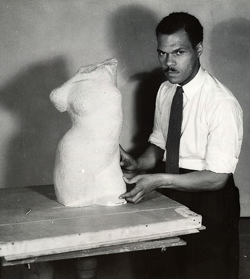 It turns out there’s a brief but interesting back story here. Prior to its redevelopment as a commercial building, one of the renters at 3528 Snelling in this historically black neighborhood was a Texan named Dee Bannarn. In 1910, Dee had a son named Henry Wilmer Bannarn. “Mike,” as he was known, grew up to be a gifted sculptor and painter who was among the first African-Americans to study at the Minneapolis School of Arts (now MCAD). In 1931, he won a prize for his painting at the Minnesota State Fair, at a time when a State Fair honor was truly one of the highest one could achieve in the state (it sounds so unlikely now, but really, read the bio of any Minneapolis artist born before 1940, and you’ll find listings of State Fair awards very close to the top of his or her lists of professional accomplishments). Bannarn lived and worked in town for a bit before moving to New York City in the early 1930s, where he became a noted figure in the Harlem Renaissance. Among his students was the famed Jacob Lawrence, in whose work you can spot Bannarn’s influence.

Bannarn never lived at this address as a boy, but his father did later in life, and he spent some time at the address visiting in his adulthood. Mike and his wife Mayola lived a few doors down at 3555 Snelling, according to his niece, Henriette Fleming.

Whatever atmospheric factors animated young Bannarn’s burgeoning sense of aesthetics on that parcel of land must still be hanging around. John’s Welding Service is home to one of the best, strangest pieces of commercial iconography in the city. If it were located anywhere else in Minneapolis other than Snelling Avenue, hidden away between Hiawatha and Minnehaha, I guarantee you’d see the JWS, Inc. logo screen-printed on T-shirts worn by particularly chic 23-year-old liberal-arts graduates at bars.

There’s an older sign out front advertising John’s services – truck and casting repair, custom fabrication, construction equipment repair and the like – but there’s also a more idiosyncratic logo a few places on the front of the building. It’s “J.W.S. Inc.” written out in a playful blue cursive, with a broken heart underneath it – a metal heart, painted red and cracking in two. The broken heart also appears in a metal sculpture on the front of the building, hanging beneath two windows.

Around the back of the shop, on Dight Avenue, the heart appears again, even more dramatically. The “J.W.S. Inc.” script sits atop the building, but the broken heart sits higher up, atop a rusted piece of metal scaffolding. 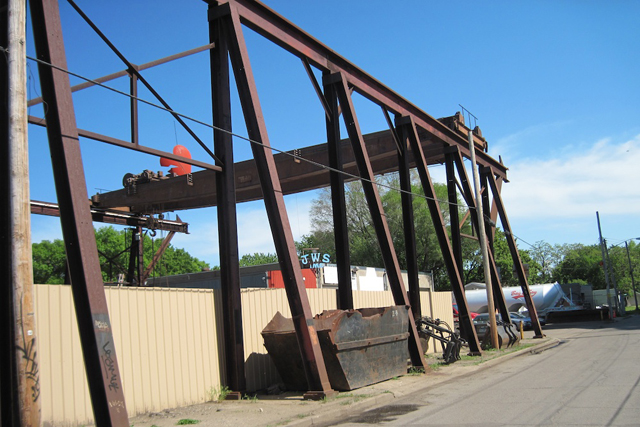 Why the broken hearts? I called the number posted outside, half-hoping no one would pick up so it wouldn’t spoil the mystique. My half-hopes were realized — no one answered. Divorce settlement? Distinctive tattoo? A representation of the sadness at the heart of knowing that nothing lasts forever, even two materials joined by flux cored arc welding? I can’t say for sure. For now, the broken heart that beats from within John’s Welding Service remains a mystery. But go around Dight Avenue, which runs for only a few blocks, and there it is, raised high in the air and dominating the block between grain towers.

This article contained a few errors about the Bannarn family’s residences along Snelling that have since been corrected. Thanks to Henriette Flemming for the clarifications.

In the shadow of elevators, streets spawn artists, broken hearts