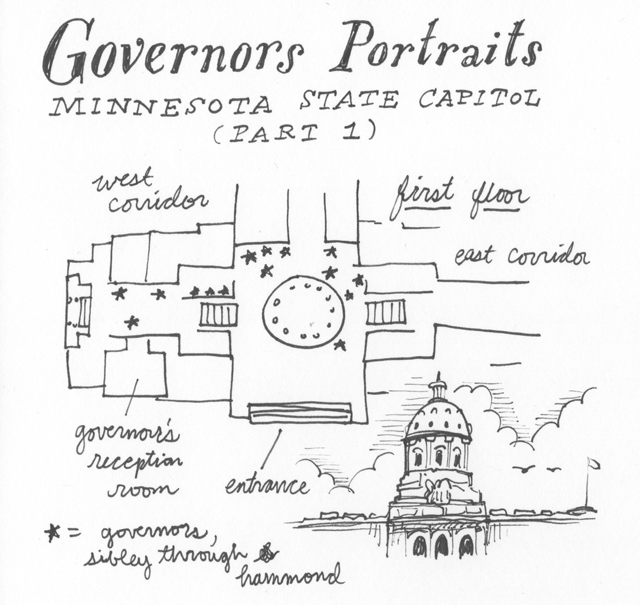 MinnPost illustration by Andy SturdevantThe Capitol’s collection of the portraiture of Minnesota’s governors is a great shorthand history of painting over the past 150 years.

Perhaps this is a stroll I should have saved for the colder months, when walking around outside, where most of these columns are set, is more of a challenge. This week is the first in a two-part series about the paintings of Minnesota’s governors, all of which you can see in the space of an hour strolling around the Minnesota Capitol building.

However, I wanted to write this when the Legislature was out of session, so in case you are moved to run to the Capitol and look at these works up close with a critical eye, the Capitol is quieter and you’re not wading through a sea of journalists, terrified interns, Vikings fans, and armies of lobbyists in medium-expensive suits. You’ll have the whole place to yourself.

The collection of the portraiture of Minnesota’s governors is a great shorthand history of painting over the past 150 years. I was tempted to write “shorthand history of a certain type of painting,” since all the works are pretty straightforward portraits, but that’s not entirely accurate. You can definitely follow the broader history of painting as you move forward through time, watching the artists adapt their styles to fit the sometimes-conflicting demands of tradition and contemporaneity.

Obviously, the practice of painting has undergone some radical shifts in the past 150 years. In the 1860s, when the first gubernatorial portraits were commissioned, the dominant schools were academic and historical, generally concerned with portraying narratives – perfect for a politically charged portrait of a governor. However, in the intervening century-and-a-half, you run through impressionism, cubism, fauvism, expressionism, surrealism, and many more, moving away from narrative and representation into vastly more complicated realms. I went to art school so you didn’t have to, so I’m not going to summarize the entire history of painting here. But I will try to show the places where these influences have peeked through.

After spending some time with this work, I’ll say this: It’s clear that official portraiture is a tricky business. It’s an utterly thankless task at which few artists can really succeed. These portraits have to reflect power and gravitas, and so necessarily can’t stray too far outside a few preset boundaries (a solemn gaze, a dark background, a hand on a desk, maybe some books or papers or curtains somewhere in the background). Essentially, it’s a conservative medium – if a portrait veers too far off into either abstraction or symbolism, the subject appears unserious, trendy, radical, dated or, worst of all, irrelevant. In this sense, the entire body of gubernatorial-themed work in the Capitol is a massive, multigenerational collaborative single work. It demonstrates, above all, continuity and legitimacy. If every painting looks generally like every other, it suggests that the government of Minnesota derives its authority from continuous succession of governor to governor, and that this unbroken consistency is a sign of the continuity and unity of the state government. Right?

On the other hand, the artist has to somehow show, visually, what made the subject not just another politician in a long line of politicians, but a statesman. It needs some hard-to-define quality that makes the work stand out in some way. The smart artist will borrow tools and techniques from the mainstream art world to do just that. The best portraits are the ones that imbue the conventions of the official portraiture with some idiosyncratic gesture that reminds you, for all their power and influence, these were just regular, duly-elected humans. 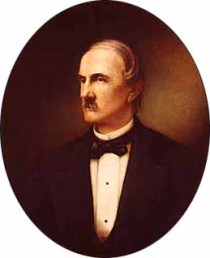 Honestly, there’s not a lot that succeed in that effort, at least early on. Most of the really good portraits come later; the early ones are quite pedestrian. Nearly every early governor was an Easterner who’d struck out for the old Northwest to make a fortune in lumber or fur trapping or some other growth industry, and wound up sticking around Minnesota. The state and its leaders were very eager to prove themselves worthy peers of their established Eastern neighbors. Therefore, the portrayals of these first few governors – Henry Sibley, Alexander Ramsey, and (to a lesser extent) Henry Swift – are safe, stately and unremarkable, and generally painted by an Easterner or European. They’re meant to be legitimizing and sober depictions of respectable, suited men that countered the popular perception of Minnesota as a wild, violent frontier battleground. The swirling, earthy backgrounds of Swift’s portrait, by an unknown painter, suggest a certain untamed natural wildness that must have seemed uniquely Minnesotan to the contemporary viewer. But for the most part, these early portraits are dull to the point of being drab. 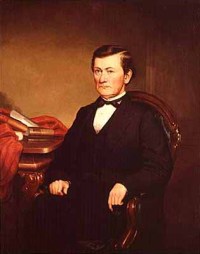 The painting of Stephen Miller, by one “B. Cooley,” is the first one that departs from the formula. It’s actually quite crude, almost outsider-ish in its slightly strained proportions and the governor’s flat, two-dimensional expression. The crudeness seems more accurately reflective of the emergent state at that time, more so than the first three. In that, it’s quite a charming piece of not-quite-folk art.

Next are William Marshall, Horace Austin, and Cushman Davis, and then skipping over John Pillsbury for a moment, Lucius Hubbard and Andrew McGill. All five of these portraits were painted, over the course of a decade, by the same artist, Carl Gutherz. Gutherz had a much more interesting career than these competent but unremarkable paintings would suggest: he was Swiss, and studied in Paris, Rome and Brussels before coming to the United States and living in St. Louis; Cincinnati; Washington, D.C.; and Memphis (although, oddly, never Minnesota). 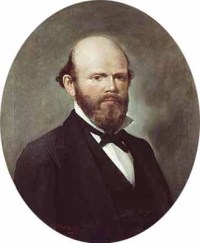 While in Europe as a youth, he fell in with the Symbolists, a decadent gang of painters revolting against the hardscrabble naturalism of the era, whose quasi-mystical works drew on dream imagery and poetry. Symbolism must have been Gutherz’s passion, and he did create many allegorical paintings of classical subjects and dreamy landscapes. But apparently it was portraiture that paid the bills – it’s hard to detect much influence of the Symbolists in these works. Or, for that matter, much of the artist’s hand. Would you guess that this is all the work of the same painter, much less one whose other paintings had names like “Sappho,” “Awakening of the Spring” and “Light of the Incarnation”? It seems very clear to me that this is work for hire. Government contract work! 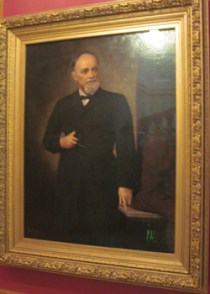 The eighth governor, John Pillsbury, has to my eyes the first exceptional official portrait. Pillsbury passed Gutherz over and had his portrait made by John Antrobus, an English-born painter based in Chicago who also made portraits of Presidents Lincoln and Grant. Antrobus depicts Pillsbury before a dark red curtain, his left hand resting upon a book and his right hand clutching a pair of reading glasses. The expression is serene but commanding. There’s a spark there; he actually looks like a real person. Technically, the painting is stronger, as well. Antrobus’ hand seems surer than Gutherz’s. 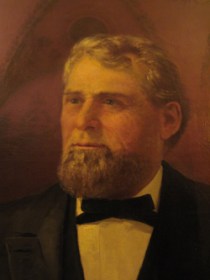 Gutherz also painted the first Scandinavian-born governor, Knute Nelson, and it’s definitely his best work of the seven official portraits he made. Nelson looks stately and determined, standing in the sort of atmospheric statehouse environment most of these works are set in. But there’s a dignity to Nelson’s portrait that seems missing in Gutherz’s other work. Gutherz died a few years later, having spent over 30 years creating portraits of Minnesota governors. 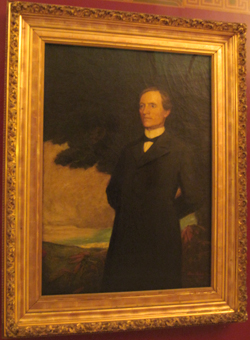 Between them is John Lind. A Swedish-born reformer and progressive, his portrayal by Cleveland-born Max Bohm is one of the few pieces written about here that is, in addition to being a great portrait, also a great painting. It’s unlike anything before it, or really after – it’s not naturalistic at all, in that it’s a scene that almost certainly never happened in life, outside the painter’s imagination. Lind stands in front of a tree on a prairie landscape dominated by towering cloud formations, his arms folded behind him, lost in contemplation. The brushwork is loose, to the point where the landscape behind him is nearly abstracted. Wild, leafy flora of some kind grow around him (how surreal!). Max Bohm, too, was a European-trained Romantic, and this scene has a certain dreamlike quality that none of the other portraits even attempts. Lind, who’s hiding a left hand he lost in a farm accident, doesn’t look dreamy, though. He has the determined look of a visionary reformer. 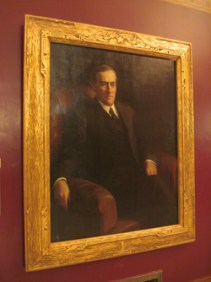 Next are two strong portraits of John Johnson and Winfield Hammond, both painted by Minnesota-born Nicholas Richard Brewer. There’s more of an air of humanity here than in previous examples; both are seated comfortably, and looking less stiff than their predecessors. Brewer seems heavily influenced by John Singer Sargent, the most famed portraitist of the era, whose works depicted powerful people in more casual, naturalistic settings, with looser, less-hurried brushwork. Brewer isn’t anywhere near that level, but these are agreeable portraits in that vein. 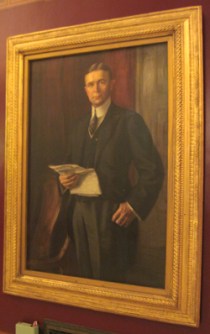 We’ll end for now with Adolph Eberhart, painted by Arvid Nyholm, a Chicago-based Swedish-born portraitist. Eberhart was a slick politician, apparently, and he regards you with the sort of insouciant bemusement you might expect from a fellow who actually changed his name from “Olson” so as not to be confused with all the other Olsons around. Fittingly, there’s a certain high-collared Gatsby-ish jauntiness to all of it. In fact, that cool, crisp Arrow shirt collar is nearly the focal point of the piece. “They’re such beautiful shirts,” sobbed Daisy Buchanan, a few years after Eberhart held the office.