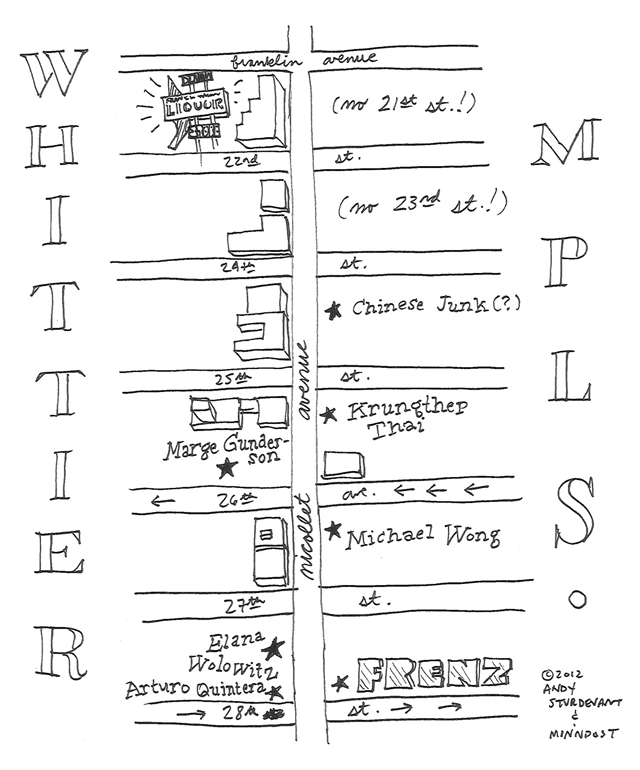 MinnPost illustration by Andy SturdevantNicollet is the easiest street in Minneapolis to walk down and tell stories about, because it’s constantly in flux.

For the past month, around two dozen storefronts in Minneapolis’ Whittier neighborhood have had artwork hanging in their windows, sitting comfortably alongside the dozens and dozens of panlingual signs, commercial products, banners, foodstuffs and artworks that already decorate the storefront windows of Nicollet Avenue between downtown and Lake Street. The project, Artists in Storefronts, is the brainchild of Joan Vordebruggen, a perpetual motion machine of an artist, performer and fashion designer who also manages to hold down a full-time job as a nurse. The work is up for another weekend, through the Northern Spark festivities.

Joan asked me to lead a tour of the project this past weekend – not just the artworks, but anything else I wanted to talk about – and I was happy to do it. Nicollet is the easiest street in Minneapolis to walk down and tell stories about, because it’s constantly in flux. Businesses open and close, everyone’s packed in tightly together, and it’s one of the few places in the city where you can hear at least five languages – Thai, Spanish, Northern cities vowel-shifted English, Somali and Vietnamese – spoken within a block or two of each other. What I liked about Joan’s project is that it commissioned new work, but also incorporated the many pieces of commercial, public and fine art that make Whittier so colorful – for example, the sign paintings and mural work by Arturo Quintera at Marissa’s Bakery at 2750 Nicollet.

I led a group of about 20 people up and down Nicollet for two hours, pointing out both the work made for the project as well as other important tidbits of visual culture, such as the city’s greatest collection of printed “GoodFellas” ephemera (A Slice of New York Pizza, 2407 Nicollet) to the classic example of Euro-style art deco typography decorating the front of Frenz Brake Service at 28th Street. What follows are some highlights from the walk, but it’s just a small sample. You could spend six hours walking down Nicollet in Whittier and only see a fraction of the visuals worth seeing. The Nicollet Avenue of the Artists in Storefront project is quite a bit different, in many respects, from Mary McCarthy’s Nicollet Avenue, which we visited on our last stroll in Whittier. A hundred years and a half-dozen subsequent wave of immigrations will do that. 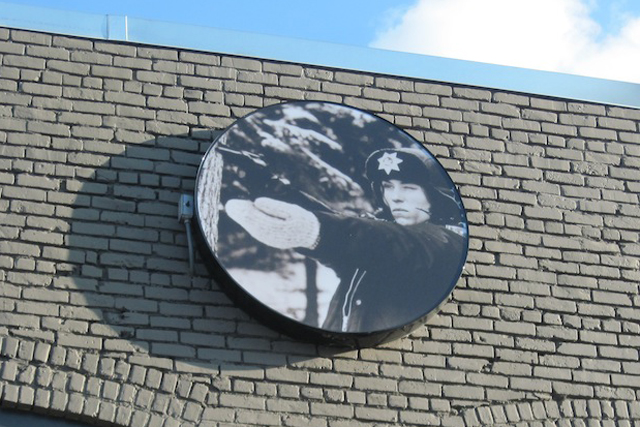 MinnPost photo by Andy SturdevantMarge Gunderson of the Brainerd Police Department, as portrayed by Frances McDormand in the Coen Brothers’ ‘Fargo.’

Near 26th and Nicollet, tucked far back in the parking lot by the old ice storage complex that now houses Vertical Endeavors, someone has mounted a circular portrait of one of the great icons of Minnesota cinema, high up on the second story. It’s Marge Gunderson of the Brainerd Police Department, as portrayed by Frances McDormand in the Coen Brothers’ “Fargo,” pointing a gun at Peter Stormare and about to deliver her famous lecture on how there’s more to life than a little money. Like most of the work here in Whittier, its origins are a complete mystery.

There is some interesting metalwork at Krungthep Thai Cuisine at 2523 Nicollet, though I suspect the metalwork predates this restaurant. I seem to recall it was called Seafood Palace, a fact that Google Streetview confirms. Between the windows are a series of grills with circular Asian designs. At the top, there is a series of sculptures, including the one below. If one wasn’t walking by and carefully observing, you’d miss it entirely.

Standing on the street, I was confident I was looking at a map of Thailand – I seemed to recall from my college geography the general contours of the country, with the Malay Peninsula jutting out into the Gulf of Thailand. Looking at it now, though, with a map of Southeast Asia in front of me, I’m not so sure. The peninsula seems to be pointing too far east (the Malay Peninsula is oriented more in a north-south direction), and I’m not sure what that western leg would be. I wonder if it’s maybe the whole area, including Myanmar, Laos, Cambodia and Vietnam, but that doesn’t look quite right, either. It’s clearly a geographic area of some kind, but I’m not clear which. Any ideas?

Michael Wong’s enormous screenprint of a radiant mountain in the window at 2613 Nicollet is lit from behind, and best viewed at night. But by using the techniques of commercial artwork – screenprinting, in this case – Wong has created a piece that looks at home in the window any time of the day. Not all artwork would flourish in this context; delicate paintings could be swallowed whole. In the public sphere, any piece of artwork has to compete against a million other colorful images, many of which are purely commercial in nature, and has to be interesting enough to hold its own. 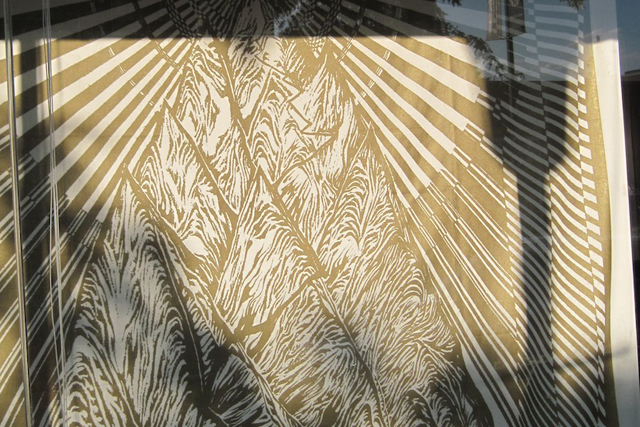 Delicate work can still find a place in this context, though. At one of the restaurants (I forgot to write the address down), there is a small, intricate wooden sculpture of a Chinese junk on a display stand, notated in two languages. I wonder if it’s perhaps the work of the proprietor, or perhaps a relative of the proprietor. The junk serves a practical function – a culturally specific decoration for the front of the restaurant to attract patrons – but also maybe a profounder, more art-like function. It’s a valuable object, a piece of art that signifies the craft and care that the restaurant’s proprietor puts into his or her work. 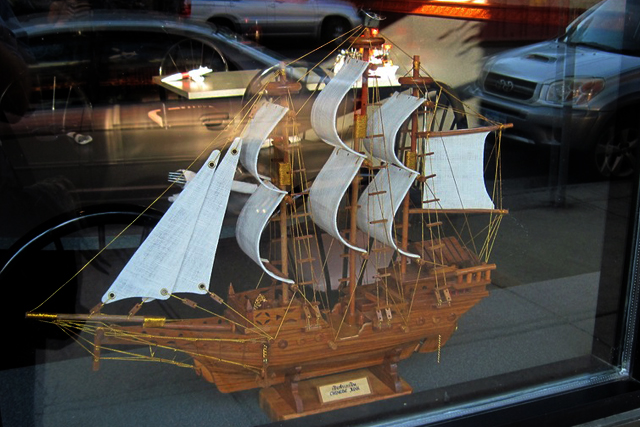 MinnPost photo by Andy SturdevantIt’s a valuable object, a piece of art that signifies the craft and care that the restaurant’s proprietor puts into his or her work.

Toward the end of the walk, there is a collection of lovely letterpress posters by Elana Wolowitz that hang in the window at 2710 Nicollet. My favorite of them actually features this column’s old nemesis, the Minneapolis flag. But here, actually, Wolowitz makes the flag look really good – by hanging it vertically, she emphasizes the unique pennant shape, and abstracts the more unfortunate details in the seal, such as that damned microscope. (I am sorry I just can’t get over that microscope, but really! A microscope does not belong on a city flag! Unless it’s the flag of an explicitly science-oriented city like Science Hill, Kentucky! Or maybe Edison, New Jersey!) 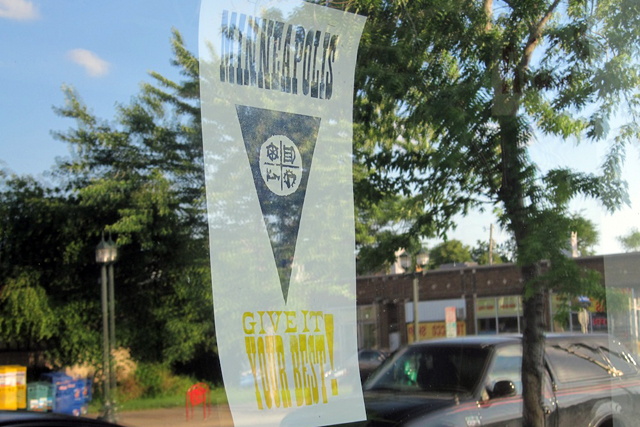 MinnPost photo by Andy SturdevantA microscope does not belong on a city flag!

Art is an always-expanding universe, one that is constantly moving outward in all directions, and absorbing the things around it. It absorbs things that weren’t necessarily meant to be art when they were created. Letterpress is a perfect example of this. Letterpress was a utilitarian tool at first, an efficient, inexpensive way to mass-produce commercial signage and printed material. The people who practiced it weren’t artists, at least not in the formal sense of having studied in the Academy and showing work in museums and athenaeums. They apprenticed and labored in print shops and storefronts. Yet today, letterpress is an art, practiced by artists, and we think of those laborers and craftspeople of the past as artists. We can appreciate the technique, the degree of skillfulness required, and the various functions the finished product can serve – informative, decorative, or both.

As you walk down Nicollet seeing the work of artists and the work of artisans side-by-side, coexisting in the public realm, the boundaries between the two begin to blur. And that’s where the real enjoyment starts.