The most common question people asked me as I wrote this series on the Minnesota governors’ portraits was if I found any sort of a correlation between each governor’s policies while in office, and the way they chose to be painted – for example, did more conservative governors have more conservative paintings? Did radical governors choose more radical portrayals?

To a certain extent, that may be true. John Lind, the subject of my favorite portrait, was almost certainly the most progressive governor up to that point, and his portrayal by Max Bohm is a clear stylistic break with the past. But this isn’t always the case – for example, Carl Bohnen painted portraits of both conservative Republican J.A.A. Burnquist and radical Farmer-Laborer Floyd Olson, two men whose political viewpoints were almost diametrically opposed. Yet he painted both of them ably, sensitively, and with no apparent preference for ideology. It’s sometimes tough to find a correlation.

Many of these men whose portraits we’ll see this week are still living, and the memory of their administrations is still fresh in the minds of Minnesotans. Many of the political circumstances that animated their decisions are still in play; not only that, but the various way in which each has chosen to be painted still resonates with how Minnesotans have collectively thought about themselves in the past few decades. The intersections between art and ideology – that correlation I’m asked so much about – are easier to pinpoint when we know the actors and the issues firsthand. We know most of these faces well. 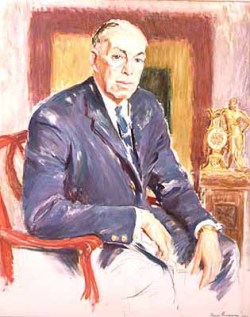 Karl Rolvaag is painted by Frances Cranmer Greenman, one of the great unsung heroes of Minnesota art. Born in South Dakota and trained on the East Coast by the likes of Robert Henri, Greenman settled in Minneapolis, where she naviagted both ends of the social spectrum, serving as both a much sought-after society painter and head of the WPA art programs in the city. Her style was loose, sketchy and highly stylized – in a few deft strokes, she captures not only the likeness of Rolvaag brilliantly, but also the uncertain, exciting tenor of the postwar era. Rolvaag sits in front of a mass of color that looks almost like a Mark Rothko painting. Of all the paintings in the Capitol, this is one of the few that bridges the gap between the expectations of official portraiture and the contemporary artistic zeitgeist. It’s a bold statement that’s also not the slightest bit kitschy – a combination I’m afraid we won’t be seeing again.

Harold LeVander is portrayed by Barbara Brewer Peet, daughter of Edward Brewer and granddaughter of Nicholas Brewer, each of whom painted two governors each. Peet’s portrayal is engaging and modern, very much of its time and place and in the vein of Greenman’s portrait of Rolvaag. The only slightly odd touch is the presence of George Peter Alexander Healy’s 1869 painting of Abraham Lincoln on a wall in the background, positioned in such a way that it looks like Father Abraham is perched on LeVander’s shoulder, like a guardian angel of some kind. It’s a reasonably appropriate choice for a Republican, to be sure, but an oddly literal one nonetheless. 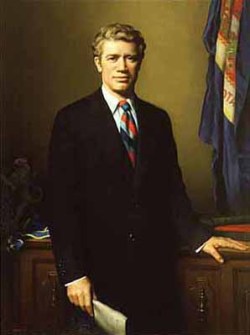 Regarding ideology and aesthetics, in one case, there is a negative correlation between the two: that of Wendell Anderson, portrayed by Richard Lack. This is, for me, maybe the greatest governors’ portrait of the modern era. It exemplifies everything a traditional official portrait should be. It’s confidently painted, and pays respect to the conventions of the genre without being too flamboyant. Anderson looks – for lack of a better word – stunning. His suit is neatly tailored and stylish, his hair is fashionably tousled, and he looks directly at the viewer with the hint of a smile playing around his lips. It’s actually a very sensual official portrait, to use two adjectives that rarely appear together in the same sentence. Anderson was one of the great liberals of the Watergate era, and this portrayal captures that youthful energy and wide-lapeled idealism splendidly – the sort of photogenic progressiveness that landed him on the cover of Time magazine in 1973.

Now here’s where the negative correlations come in: Anderson’s portraitist, Richard Lack, was an intensely conservative figure on the Twin Cities art scene in the ‘70s and ‘80s. Not politically conservative, necessarily, but aesthetically conservative. Lack was the founder of the Lack Atelier, a painting studio in Minneapolis that continues to teach rigorously academic painting, in the tradition of David and Delaroche. It is remembered in some circles for one of the more bizarre footnotes in recent Twin Cities art history: a nasty, raucous confrontation in November 1989 between Atelier members and their peers in the contemporary art scene, at a meeting of the Minnesota Artist Exhibition Program. The MAEP shows work by Minnesota artists, selected by Minnesota artists (I’ve served on the panel). At the time, the Atelier artists felt their work was getting a short shrift in favor of more conceptually driven work, and forced a confrontation at the group’s annual meeting. In art, as in politics, conservatism and progressivism vie continuously for the upper hand.

As masterful as the portrait of Anderson is, it’s certainly a step back formally from its immediate predecessors. Anderson was a forward-thinking modernist and reformer, but you’d never guess that by lookng at this stately portrait; it ignores the 20th century completely, drawing on 19th century academic genres. And yet, the two ideas coexist.

At the time, much was made of Rudy Perpich’s portrait, which included his wife, Lola – a feature no other governors included in their portraits. That controversy aside, I don’t have much to say about this one, other than it’s remarkably pedestrian. It looks as if it was painted from a photograph, and in fact serves as a sort of inadvertent argument against official painted portraits at all – why bother with the trouble of going through with a painting if a photograph will do? 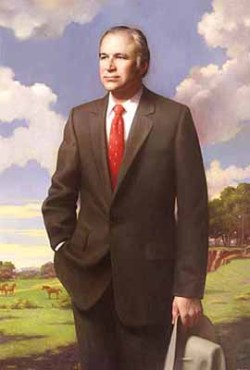 Al Quie is also painted by Richard Lack. Quie is portrayed in a suit, with cowboy hat in hand, standing in a green field under wide, blue prairie skies. This portrait represents the precise moment where regionalism metastasized into kitsch. The Minnesota landscape has turned up in previous portraits – Swift, Olson, Thye – but never in such a self-consciously revisionist way. The city is nowhere to be seen. In fact, the only manmade feature is a church, far off in the background. Minnesota, portrayed in portraits of Govs. Olson and Thye, as a mighty, sprawling landscape that encompassed both vast, productive farmlands and towering skyscrapers, has mystically transformed into a sleepy, conservative agrarian backwater, tended to by a benevolent Reaganesque rancher. 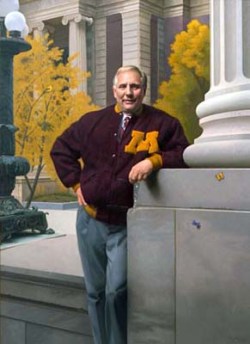 Arne Carlson is painted by Stephen Gjerston, a student of Lack’s. At first glance, this enormous portrait of Carlson, decked out in his University of Minnesota letterman jacket, registers as tasteless bordering on vulgar (remember, “vulgar” comes from the Latin word for “common, ordinary”). After painting after painting of men in formal suits, enveloped in an aura of power, it’s almost a shock to see Carlson smiling affably in his maroon and gold, hanging out near Northrop Auditorium. Can you imagine any of his predecessors dressed in this way? But it’s so good-natured, it really overwhelms my critical facilities. It’s actually a fairly smart move. Carlson clearly wanted to be thought of as an affable, regular guy, and here he is, being just that. You tell ‘em, Arne. 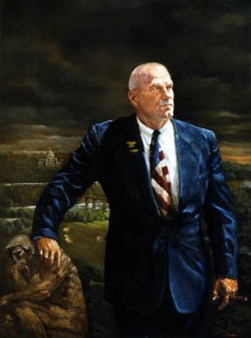 Speaking of overwhelming critical facilities, Jesse Ventura’s portrayal by Stephen Cepello, a wrestler-turned-fine artist, is legendarily over-the-top. Sure, it’s absurd – The Thinker! That American flag tie! The bolts of lightning! The damned cigar! – but Cepello wasn’t ignorant of his predecessors’ work. The background actually calls to mind the portraits of Floyd Olson and Edward Thye, with the Twin Cities humming away productively in a background landscape; I mean, in a weird, comic-book sort of way, the portrait actually places Ventura in the broader context of Minnesota’s governors. Ventura was an outlier, to be sure, and this portrait is sui generis. It positions the governor as a sort of superhero, an ass-kicking Navy SEAL who got light rail built, even as the storm clouds approached. But even in its bold, operatic weirdness, it doesn’t ignore precedent or tradition. In its own bizarre, flamboyant way, it absolutely works. 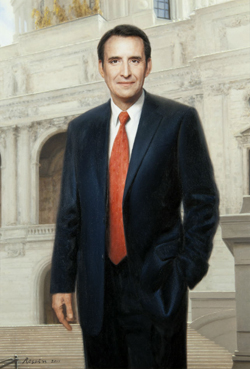 Until Mark Dayton has his portrait made, that leaves us with Tim Pawlenty. Before the painting was unveiled last year, I imagined that Pawlenty was going to go the Carlson route; the “hey, I’m just a regular guy” schtick, except cranked up to overdrive. I expected a snowy south metro landscape, with a figure dismounting a kick-ass snowmobile in a full jumpsuit. The figure is removing his helmet, only to reveal – wait a minute! – it’s Tim Pawently, shaking his mullet in the breeze!

Any other year, he might have done just that. But this painting was created in 2011, during the earliest parts of the Republican primaries, and I think Pawlenty’s eyes were on the prize. This is clearly the painting of a man who thought he’d be president – safe, bland, and not even painted by a Minnesota artist. Straight-on, fishy half-smile, one hand in his pocket. It’s forgettable in every way, much like its subject.

That brings us to the present. The Stroll will be back out on the mean streets next week, and there’ll be a special supplement in the next few days with a wrap-up of all the governors’ portraits, including assessments from painters Carolyn Swiszcz and Ta-Coumba Aiken, Soap Factory Director Ben Heywood, and Russian Museum of Art Curator Masha Zavialova.

Next time you’re at the Capitol, take a few minutes to walk through and look at these paintings up close. Many of them – most of them, even – are quite amazing. Collectively, they’re one of the most poignant group portraits of who we as Minnesotans have been, could be, and would like to be, as embodied by these thirty-nine individuals.