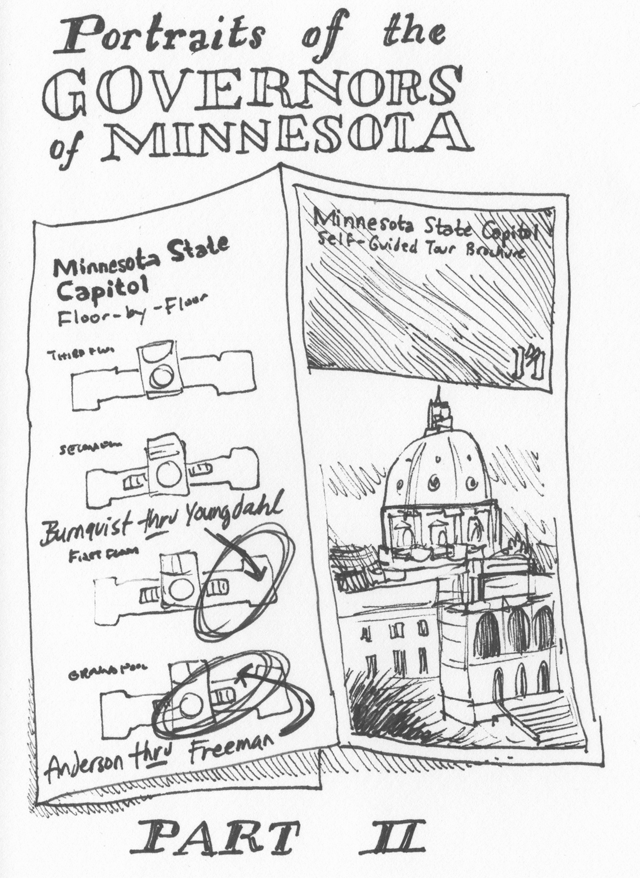 Well, there’s been a change of plans.

It had been my intention to conclude our tour of the Capitol’s paintings of Minnesota’s governors this week, covering the 1920s and moving to the present. However, it became clear pretty quickly that cramming 80 years’ worth of artistic progress (or, in some cases, regress) into a single thousand-word column would be quite difficult. How can I do justice to the portraits of Floyd B. Olson, Harold Stassen, Wendy Anderson, Rudy Perpich, Jesse Ventura and onetime Republican presidential second-to-back-runner Tim Pawlenty, and still have room for their less well-known peers?

Of course, any good stroller needs to possess a certain flexibility and willingness to dawdle if the subject demands it. This walk through the Capitol seems to demands it, so next week, we’ll conclude the tour, beginning with Karl Rolvaag and ending with the recently unveiled portrait of Pawlenty. And since this been so enjoyable a process (for me, at least, and hopefully for you), there will also be a bonus Stroll supplement sometime in the next week or so: a final assessment of all the portraits, along with top picks by four outstanding members of the Twin Cities art community. 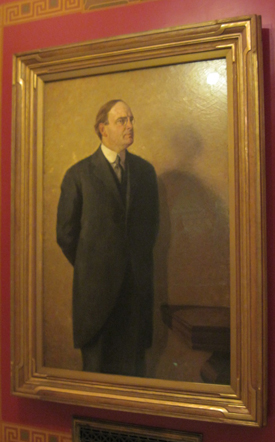 We’ll begin with J.A.A. Burnquist’s portrait. This was the first painted by Carl Bohnen, an artist with St. Paul roots who took Carl Schurz’s crown as preferred portraitist of our state’s top executives. Starting with Burnquist’s portrait in 1919, Bohnen would paint the next seven governors. While Bohnen would prove himself to be an outstanding portraitist in the years to come, this first painting is quite odd – Burnquist is shown at three-quarters, facing to the right with his hands clasped behind his back. He’s lit by a strong light source coming in from the left, one that casts a dramatic shadow against the wall Burnquist stands in front of. It’s actually somewhat ominous, reminiscent in some ways of the shadowy, ambiguous spaces in the work of Bohnen’s Italian contemporary, Giorgio de Chirico. Perhaps the idea here was to indicate that Burnquist’s legacy casts a long shadow over the affairs of the state, but it seems a bit sinister.

J.A.O. Preus and Theodore Christianson, two conservative Republican governors of Scandinavian descent, get a fine, more traditional treatment from Bohnen (both are currently out for repairs, but you can see them on the Minnesota Historical Society’s website). The two are finely attired, handsome, serious-looking men who could just as easily be prominent bankers, attorneys or businessmen as governors. Bohnen’s work has fully caught up to the 20th century – it respects the convention of the official portrait genre, but shows a willingness to tweak those conventions as needed, in composition, coloration and brushwork.

There is a confidence to these paintings, and in the paintings of Bohnen’s to follow, which nicely reflect Minnesota’s standing in the nation in the early 20th century. No longer an upstart young state overshadowed by its eastern neighbors, Minnesota is in this era an economic powerhouse with booming cities and thriving industries. These paintings depict leaders that are as comfortable and confident in their power and influence as any scion of New England. 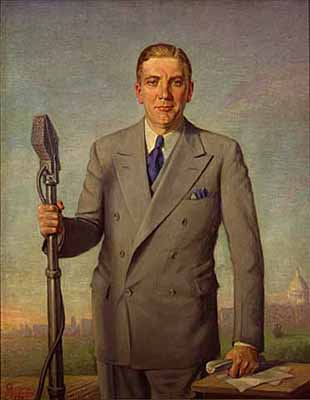 Next is one of the most-portrayed leaders in Minnesota history, Floyd Olson, and his portrait stands as one of the greatest in the Capitol. It’s out for conservation work right now, so you’ll have to wait a few months to see it again, but it will be well worth the wait. The first governor elected from the Farmer-Labor Party, Olson was a rising star on the national scene who might very well have attained higher office had his career not been suddenly cut short by stomach cancer in 1936. This portrait is a definite turning point in the collection: It’s the first to make unmistakable reference to Minnesota specifically.

Some of the earlier portraits had hinted at the wild sublime in their background compositions (Henry Swift and John Lind, for example), but Bohnen depicts the actual physical landscape of the state behind his subject, with the Capitol to the east, and the skyline of Olson’s hometown of Minneapolis to the west. This is not a portrait of a governor ensconced in his private chambers away from the public view, nor is it a portrait that pays lip service to the self-consciously tasteful, restrained modalities of official portraiture – this is a man out in the state he serves, both a part of it and towering over it.

The other key detail is the microphone Olson clutches in his right hand. Bohnen may have been interested in regionally specific details, but he wasn’t provincial, and the inclusion of the radio must have made this portrayal seem strikingly modern at the time. Like his contemporary, President Roosevelt, Olson embraced the new medium as a way to get his populist message out to as many people as possible. The presence of the microphone here seems to indicate that Olson’s words were heard by millions. This portrait was painted very shortly after his death, so there is certainly a more grandiose, commemorative quality than in many of the others. But it’s one of the boldest, and one of the best. 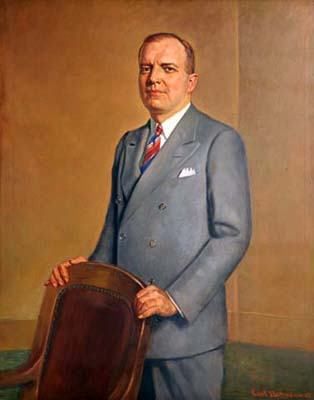 Hjalmar Petersen (also not on display at the moment) and Elmer Benson, Olson’s Farmer-Labor successors, receive excellent portrayals by Bohnen. Benson’s portrait is particularly strong – he sits purposefully by a small table with a few books on it, wearing a dark suit, looking both youthful and commanding. Next is Harold Stassen, remembered today more as a punch line for his numerous ill-fated presidential primary campaigns. This was Bohnen’s final official portrait, and much like the one be began his career with, it’s quite an odd one. Stassen appears to be in an empty room, gripping a chair in front of him with an almost nutty intensity, evident in his expression. Reflecting upon it further, I wonder if it’s meant to convey the idea of Stassen as a servant (“have a seat, citizen, I’m here to help”), but it makes him seem strangely unmoored. A few years after this was painted, Bohnen died at age 79, having painted portraits of Minnesota’s governors for over three decades.

Luther Youngdahl’s portrait, depicting him sitting at a desk in a double-breasted suit signing a bill into law, is stodgy to the point of near-parody. 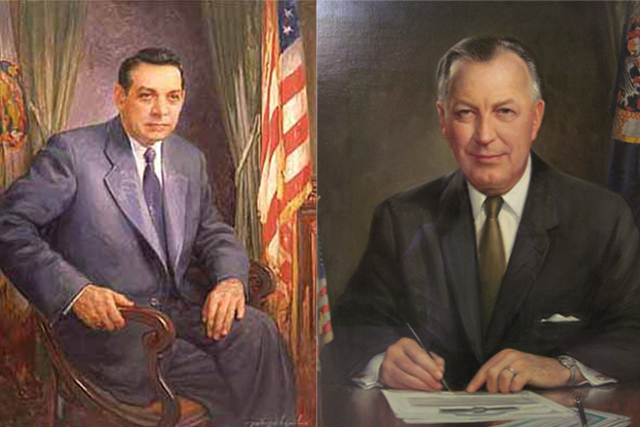 C. Elmer Anderson and Elmer L. Andersen are both portrayed by Edward Vincent Brewer, a beloved Minnesota illustrator best known for his iconic painting of the chef on the Cream of Wheat packaging. Once called “Minnesota’s answer to Norman Rockwell,” he was the son of Nicholas Brewer, whose outstanding portraits of John Johnson and Winfield Hamilton we saw last week (and in fact, his grandson Allen Brewer is a noted St. Paul-based artist). Despite Brewer’s pedigree, I find these portraits difficult to get excited about. They’re as well-executed as any on display, but they appear to me to be too stiff and overly formal, too much like magazine illustrations. They don’t say seem to convey anything about the character of these men, beyond the fact that they held positions of authority. 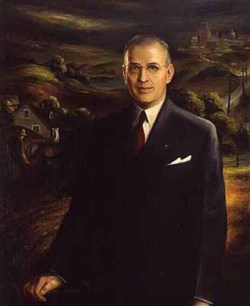 The portrait of Edward J. Thye, between Anderson and Andersen, is another where regionalism comes into play. Theodore Sohner, the artist, was a noted portraitist, but was also known for painting scenes of small towns created during the New Deal. Sure enough, some darkened, rolling hills appear behind Thye, alongside a farm scene right out of the Federal Art Project, and the glimmering city lights of St. Paul in the distance. This might seem hokey if it weren’t executed well. But it is, and I admire the genuine attempt to fit portraiture conventions into a specifically Midwestern artistic context.

The work of regionalist painters of that era (Minneapolis-trained Grant Wood, for example) did a lot to advance the cause of arts and culture in the Midwest, and Sohner seems to be consciously drawing on that. I do have a bad feeling, though, that this sort of regional scenery portends a late 20th century descent into kitsch. 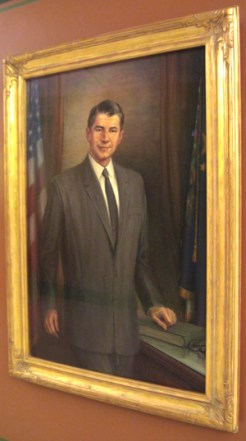 We’ll close this week with Orville Freeman, who has the distinction of being the first governor painted by a female artist, the Hungarian-born Californian Elizabeth Milhayi. Unfortunately, this is one of the poorer portraits on display. Freeman wears what should be a chic, Kennedy-era three-button suit, but it seems instead like a comically oversized zoot suit. The decision to paint Freeman without his trademark plastic-rim glasses is puzzling, as well. His smile is nicely humanizing, but otherwise, it’s quite bland. The brushwork is only average, and Freeman stands in one of those stiff poses that no human not posing for an official portrait has ever stood in. This is a good example of how playing it safe can leave a once-popular, photogenic politician like Freeman with an unmemorable painted legacy.

Next week: Our handsomest governor, revealed.