Up on the third floor of the Minneapolis Central Library, past the racks of CDs and near the drawers of sheet music, there are several rows of file cabinets, each nearly 5 feet high, containing hundreds of thousands of black-and-white and color images of nearly every subject. It’s the library’s picture files.

If you’re a designer, history nerd, artist looking for inspiration, amateur historian, or simply the sort of person that enjoys looking at dozens and dozens of photos of pinball machines in one sitting, it’s one of the best resources around.

In the years before Google Image Search, librarians collected hundreds of thousands of images, from books, magazines, educational tools, and miscellaneous printed ephemera, and organized them by subject. Journalists used to call them a “photo morgue.” The picture files were first brought to my attention by Isa Gagarin, a Minneapolis-based artist whose work draws extensively on anthropological field photography. They’re holdovers from a pre-digital era, which is why I’d imagine Isa was drawn to them (and certainly why I am). When an item of any kind outlives its previous usefulness in the physical world, it begins to make that long twilight journey into the expansive and mercifully forgiving realm of art.

Which is not to say these images have outlived their usefulness entirely. It’s a great, extensive collection, of all kinds of images, the vast majority of which have never been digitized. Which means, mostly likely, you’ve never seen them. 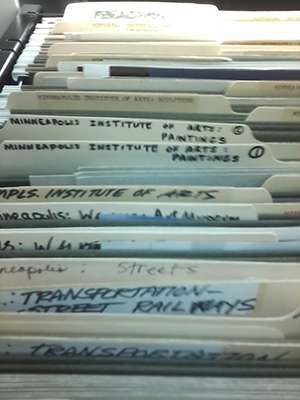 MinnPost photo by Andy SturdevantMany of the photos in the library’s collection have never
been digitized.

Here is a tiny sampling of the file folders in just a single row in one of dozens of drawers: cotton, country stores, cowboys, cowgirls, crate labels, Crete, Cretan antiquities, cricket, crime and criminals, Croatia, and cross-dressing (which somewhat mysteriously contains a 1994 photograph of musician PJ Harvey I actually remember seeing in Rolling Stone at the time, possibly selected by a long-ago librarian whose critical faculties were temporarily overwhelmed by Polly Jean’s fur coat and garish makeup). Each of these contains dozens of photographs.

What’s striking about the picture files is not merely the breadth, but also the way in which they’re presented. As with going through pages of Google Image Search results, the best part about flipping through each subject folder is that the images are totally free of context. Beyond the subject heading, they’re gloriously disorganized. The images have mostly been cut out of magazines, only sometimes with their captions preserved.

Sometimes a librarian has notated the source material, but other times there is no notation. It’s not always clear where the photograph has come from. Some of the sources are recognizable (I’m gratified to see a few of the first photos cut from the pages of the first magazine I was ever published in, the late, great Rake). Others are not recognizable, shorn long ago of surrounding contextual information. Clearly ancient, yellowing prints sit side-by-side glossy pictures that are only a few years old.

They’re not in chronological order, either. In keeping with the concerns of this column, I selected the “Minneapolis streets” folder to see what’s in there. It’s a treasure trove of photos of street scenes, jumbled out of order into a never-was downtown streetscape where the Pence Opera House, Shinders, a pre-pornographic Gopher Theater, the Hiawatha LRT, the Gateway District, and the skyways all exist in the same space.

Perhaps the most remarkable thing about the picture files is that you can actually check them out. Pick a few, pack them in an acid-free binder the library provides, and take them home with you. There’s something wildly endearing about the open-ended public-service quality of all this. There are no guidelines for what to do with the images. Do anything you want with them.

Or almost anything: A label on each folder points out that “this material may be protected by copyright law,” and that “the user of the material assumes responsibility for copyright infringement, and agrees to hold the Minneapolis Public Library harmless for any misuse of such material.” As we have learned from a decade or so of online intellectual property disputes, just because you have access to an image doesn’t give you license to reprint it wherever you want. I’ve taken my chances here, and selected a few from the “Minneapolis streets” that caught my eye. 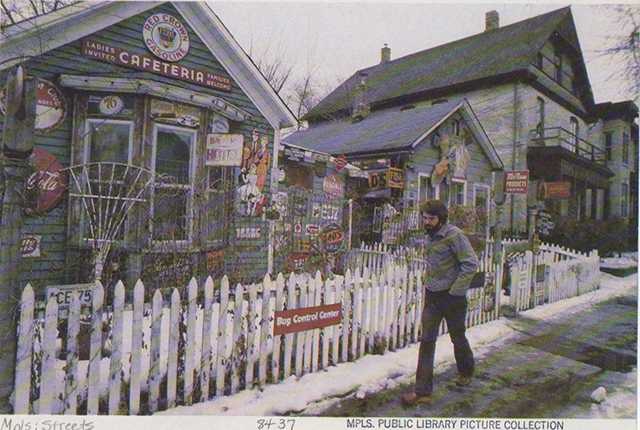 Courtesy of Hennepin County LibraryDo you know where this photo was taken?

I’m particularly smitten with the strange, little residential house that’s covered with the type of signage one usually finds on the inside of a family restaurant. Judging from the attire of the young man walking by, I’d guess the ‘70s or ‘80s. But of course, a beard like that could come from almost any point in the last 40 years. Any guesses on the location? 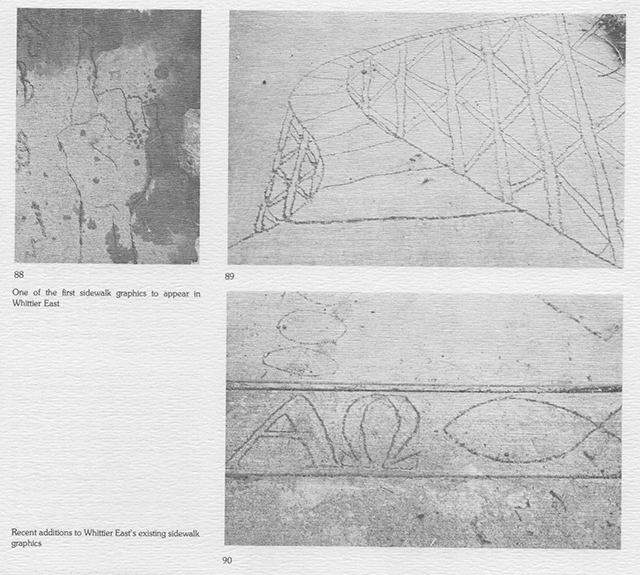 Several images seem to come from a Whittier-based guidebook of some kind, printed on a creamy, textured stock and typeset in the ne plus ultra of ‘70s typefaces, Souvenir. Since the pages are a little cut up, it’s hard to tell exactly what’s going on, but they seem to outline a public-art plan, part of which seems to include drawings in wet cement on the sidewalks by MCAD students: typically addled, oddball Nixon-era stuff, like pointing fingers, Jesus fish, and a roller coaster. 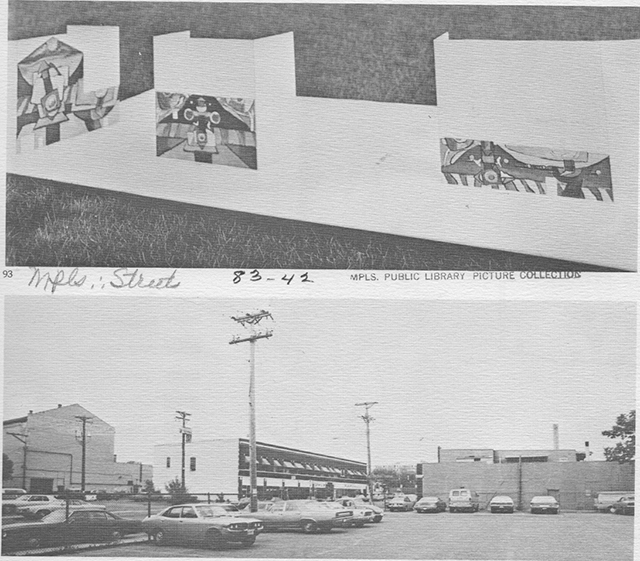 The most interesting part is a proposal for a Hollis MacDonald mural to be painted on some blank walls at 26th and Nicollet. MacDonald is one of the most interesting Minneapolis artists of the past few decades, and I’d never heard of this mural before – to my knowledge, it’s not there anymore, even though it’s hard to pinpoint the exact location based on the photos. “The larger purpose is to enhance the aesthetic environment which is now dominated by parking lots,” notes the accompanying text. That sentiment sounds just as home now as it did whenever it was written. 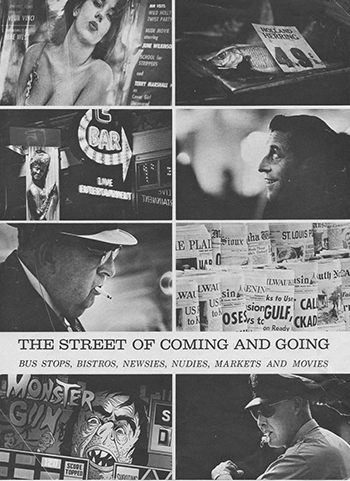 A lovely photo essay of Hennepin Avenue in the ‘60s or so promises “bus stops, bistros, newsies, nudies, markets and movies.” Some of those things you can still find on Hennepin, right? Hidden in there is a familiar face. Peeking past the neon signage is that wooden can-can dancer smoking the cigarette that now stretches horizontally over the top of the bar across the river at Whitey’s Saloon in Northeast. Someday I’ll devote a column just to her story. But no matter how much Minneapolis seems to have changed, it’s good to know we can still find our friends if we look hard enough.

Exploring Central Library’s picture files, where past and present coexist