The public areas around Target Field in the Warehouse District are unlike any other in the city of Minneapolis. They really are public spaces, in both the literal sense of having been paid for by your tax money (at least if you spend money in Hennepin County), and in the more metaphysical sense of really being a space that the public uses to the fullest extent.

The hours before and after a ballgame are filled with hundreds of people, acting out very public behaviors. People are walking, talking, laughing, sitting, waiting in lines, and interacting in a high-density sort of way you don’t see in many other places around town – even in wide-open public spaces like Nicollet Mall or Loring Park. They photograph each other, talk to strangers, haggle for tickets with scalpers, and look at generally high-quality public art. Outside Target Field on a summer evening right before a game is a lively, exciting place to be.

That is, within certain parameters. For all its liveliness, Target Plaza and the surrounding promenades are also very carefully regulated spaces. Everything is carefully measured and supervised – there are no freewheeling vendors hollering for you to buy homemade pickles in Mason jars and felt pennants. The majority of fans are attired in officially sanctioned Twins gear. There’s something very orderly and carefully managed about the whole place. While it’s often genuinely thrilling to be surrounded by hundreds of passionate fellow citizens outdoors on a beautiful day, all anticipating an exciting game to come, it can sometimes seem more like a simulacrum of an authentic public space.

However, there are a few figures scattered throughout the throng whose commitment to unregulated self-expression makes the space seem really public and really alive: the many fans with homemade signage on cardboard and poster board. Where else in contemporary cultural life do you encounter so many people that would never identify as “artistic” or even “creative” carrying around objects they have lovingly handcrafted for maximum visual impact? Nowhere.

In Minnesota, the best expression of this sort of person’s need for self-expression is in the ubiquitous “Circle Me Bert” sign that people bring to ballgames. It’s certainly one of the great regional folk-art traditions. Presumably it began around 1995 or ’96, when former pitcher Bert Blyleven became a Twins color commentator and began idly circling random fans on the telecasts with a video marker.

Oddly, I can’t turn up any early references to the origin of the sign-making practice in the Star Tribune’s archives, reinforcing my belief that sportswriters should be forced to take at least a few visual-studies classes so they know to look out for this stuff. (And parenthetically: Yes, I also think art majors should be forced to attend sporting events, although that seems less necessary, since most Midwestern artists are also huge sports fans. Seriously, go to an art opening in south Minneapolis in October and hang around the bar. You think the artists are going to be making small talk about Walter Benjamin’s Das Kunstwerk im Zeitalter seiner technischen Reproduzierbarkeit? No, they’re going to talking about the Twins’ inevitable postseason collapse against the Yankees, or whatever went down on Lambeau Field the previous Sunday.) 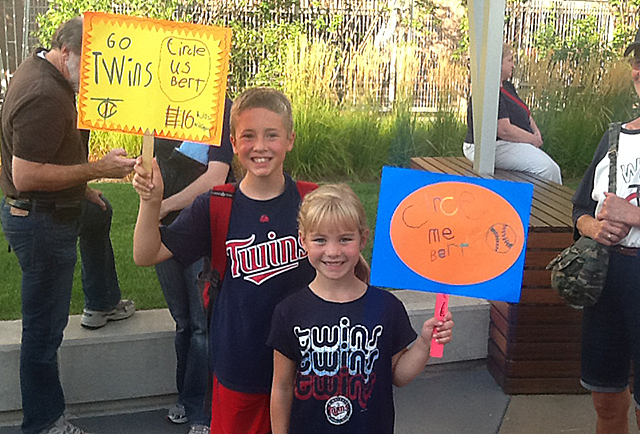 Thomas and Amelia of Park Rapids provide an excellent example of the homemade “Circle Me Bert” signage: colorful and to the point, with supplemental messages on the margins (Thomas throws in a nod to #16 left fielder Josh Willingham). I also award Thomas and Amelia extra points for eschewing the standard blue-and-red color scheme for some arresting neons.

Some will go as far as cutting circles in the signage and physically sticking their heads through the hole, but the artists here have restrained themselves from engaging in this sort of showboating. Also popular is the appeal to Bert for recognizing them for some life event or accomplishment (“CIRCLE ME BERT IT’S MY BIRTHDAY,” etc.). I wonder how much sway those sorts of appeals hold. Bert’s a pretty capricious guy. 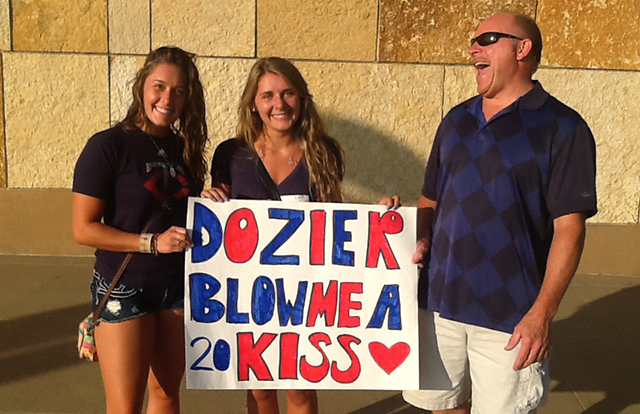 While there are conventions for fan signage that one can follow, there are no preset templates that must be adhered to. Anything can go on a sign, so long as it’s clever, attractive and/or designed with the audience in mind. Here, two young women demonstrate the idea with a personalized (and very reasonable) appeal to Goslingesque infielder Brian Dozier. Homemade ballpark signage is a venue for all sorts of emotions: triumph, anxiety, celebration, wonder, admiration, desire. 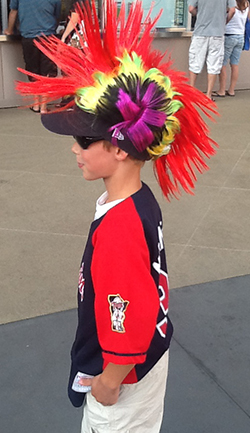 Despite the presence of mostly officially sanctioned attire, there are always notable examples of fans going a little overboard with glitter, face paint, color planning, or otherwise over-the-top costuming. The young man below, Jack of Edina, sported some exceptionally attention-grabbing feathery headgear. I asked him, “Jack, what’s going on here? Your hat is crazy.” He shrugged and looked sort of embarrassed. “Well, I just sort of … found it,” he said. I think Jack is being too modest. You don’t see enough ballpark fashion aiming for punk Quetzalcoatl.

In fact, I’m tempted to say Jack could have a future making these things and selling them to fans. Maybe, but that sort of regulated commerce is kind of antithetical to the spirit in which the hat was created and worn. Jack’s out there wearing his crazy feather Mohawk hat with the fans and scalpers and amateur photographers and buskers and people who want Bert to circle them because they just got engaged, and they’re all making up a joyous, roiling public space full of neon colors and novelty foam and weirdness.

It may all be closely regulated, but there’s a joyousness nonetheless that can’t be as easily contained or explained.