Maybe I’m just going to the wrong bars and restaurants, but here is something you see all the time in St. Paul, and almost never see in Minneapolis: framed photos on the walls of all of the famous people who have frequented the establishment over the years (with the definition of “famous” varying wildly from “household name” to “vaguely familiar, locally specific face”). Not just a few framed photos on one wall, either, but on every wall, covering them.

Can you think of any Minneapolis restaurants that do this? Market Bar-B-Que on Nicollet is the only one that comes to mind. Otherwise, I don’t remember seeing this sort of thing, even at much older places, like Jax Café or Peter’s Grill. I could be wrong. But even so, it’s hard to deny that this sort of portrait arrangement is really a native art of the restaurateurs and bartenders of St. Paul.

There are a few possible reasons for this. This may be because St. Paul is the state’s seat of power and its bars and restaurants attract a more influential clientele (maybe somewhat true). It may be because the bars and restaurants are just older (probably true), or because the whole city is just more neighborhood-oriented (almost certainly true), or has a better sense of its own history (100 percent true), or is just much more provincial (hey, careful there).

The pinnacle of this art is the Lexington, on Grand Avenue, which has framed photos of nearly everyone who’s held any elected office in the state since the 1950s. In the interest of keeping this column to a contained geographic area, however, we’ll focus instead on some establishments located on one of the oldest roads in the state. It’s a road where much of this sense of fame, influence, memory, power and history resides.

The road is West Seventh, roughly from Cossetta to Mancini’s.

West Seventh was first known as Fort Road, because it carried travelers – by horse, then streetcar, then automobile – parallel to the river from Fort Snelling to St. Paul. The oldest residential neighborhood in the cities, Irvine Park, is right here – it was home to governors, mayors and congressmen. It was also the endpoint for a half-dozen waves of immigration: Italians, Germans, Bohemians, and Poles. The Xcel Energy Center is currently located there, but before that, it was the home of the St. Paul Civic Center Arena, which is where you went to go see the Fighting Saints and the Clash and Verne Gagne. For god’s sake, Bruce Springsteen filmed the video for “Dancing in the Dark” there. The whole Seven Corners neighborhood and surrounding area has been an incredible nexus of many of the things that make St. Paul such a great city: immigration, wealth, political influence, beer, hockey, and arena rock.

Cossetta, aka Cossetta’s Italian Market & Pizzeria, has sat at the top of West Seventh for a hundred years; Mancini’s has been less than a mile away down West Seventh since 1948. Both were founded by neighborhood Italian families who lived in the Little Italy section around the old levee, and whose children and grandchildren and great-grandchildren continue to run the businesses. These establishments serve as micro-museums, preserving the history and culture of the immediate neighborhood in a more immediate way than a formal institution could.

In fact, Cossetta’s visual holdings are so vast that it’s practically an unofficial museum to the Italian-American experience in St. Paul in the 20th century. Particularly on the second floor, in the dining area, there are dozens of photos of the neighborhood. There are plenty of photos of dignitaries who’ve visited – Alan Page, Tim Pawlenty, Norm Coleman, Cal Clutterbuck, Henry Winkler, Ricky Rubio, and an enormous photo of Frank Sinatra, mounted near the front of the deli line with a handwritten letter from the Chairman himself personally thanking the proprietors for a great meal. But it’s the neighborhood that’s really the star. There are images of the store, of people who have lived in the area, pages from yearbooks, members of the Cossetta family, newspaper clippings from the past 70 years, documentation of the floods that made the area so difficult to settle, photos of parish priests, bishops, and monsignors. All are mounted on red, green or white mats. Celebrities come and go, but the neighborhood is forever.

Next to Cossetta is Maharaja’s, “your rock and roll headquarters” (“we’re the good guys!” reads a hand-written note on the front door). Maharaja’s preserves a perhaps equally important legacy of the neighborhood: post-war arena culture. So much of the décor at Cossetta is devoted to amateur and professional sports, and hockey in particular. That’s because people have been coming down to Seven Corners for almost 40 years to go to arenas and see hockey games, but also wrestling matches, rock shows and other noisy, live events. They’ve also come here to drink beer, eat pizzas and sausages, and possibly ingest other substances while doing so. Maharaja’s pays tribute to all of these ideas: they sell hockey sticks, incense, T-shirts, jock sweatshirts supporting the Wild, North Stars and Golden Gophers, jewelry, strobe lights, posters, action figures, signed fan memorabilia, and just about anything else you can think of that a discerning rock and/or sports fan might want to wear, own or look at.

maharajasgifts.com
There are 3D glasses available in a basket on the floor, and I recommend you put a pair on.

The real visual tour de force is in the back of the store, however: There is an enormous, walk-in black light room. There are 3D glasses available in a basket on the floor, and I recommend you put a pair on. Because this room is amazing. There are posters of the usual black light-oriented heroes: Bob Marley, Scarface, Marmaduke (wait, Marmaduke? Yes, Marmaduke!). On the floor is a yellow brick road, leading to a fantastic painting of Oz on the ground, which appears to be floating in space when you stand on top of it and look down. At the back of the room is a 3D spiral, with Rod Serling standing next to it, smiling with sinister intent and smoking what may or may not be a cigarette as he pops off the wall at you. It is truly mind-boggling.

Uh, back on track. Mancini’s is less than a mile away down West Seventh, right on the edge of the old Little Italy section of town. In the same way that Cossetta’s documents the neighborhood, Mancini’s carefully documents the city’s obsessions: sports (hockey, football, baseball, boxing, and basketball, in descending order of importance), music, politics and religion. The selection is monumental. Don Mattingly. Dave Winfield. Ken Yackel. Vern Gagne. Two of 1980 U.S. Olympic hockey team coach Herb Brooks. Hal Holbrook. Helen Reddy. A big one of Tony Bennett. Dozens and dozens of boxers, singers, entertainers, sportsmen, and others I don’t recognize. On top of that, there are platoons’ worth of soldiers, both G.I.s and officers, of all wars. A whole section of wall is devoted to the many exploits of Cretin-Derham’s student athletes over the past half-century. 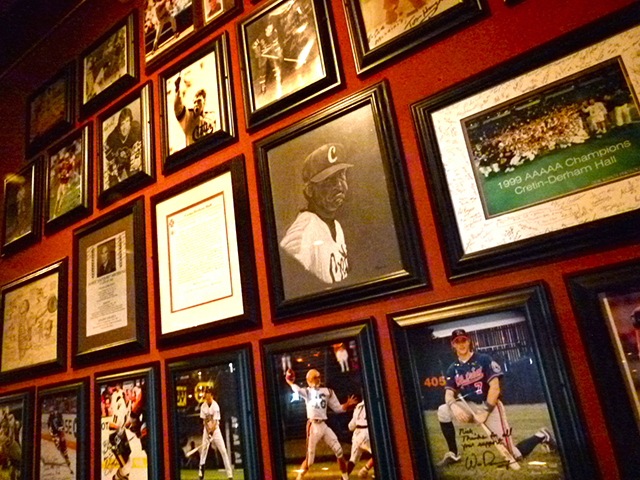 These portraits are generally arranged thematically, but not necessarily chronologically, which is why the photo of Ms. Reddy is joined by one of Ashlee Simpson, a singer with whom Helen Reddy shares very little in common, save they both ate at Mancini’s and enjoyed themselves.

This anti-chronological blending of time is part of what gives Mancini’s its timeless quality. The photos and displays are somewhat well-notated, but there’s also a clear sense that if you come into Mancini’s, you’re going to already be somewhat familiar with a lot of what you see: not only the high-level celebrities like Tony Bennett, but also the faces that make up the varsity hockey squad from the local high school that played down the road at the arena in the championships in nineteen-whenever.

This is St. Paul, they say. You know these people. You can even be one of them. Fame, influence, memory, power and history are what you make of them, but everyone likes to have a good place to go for dinner and drinks.