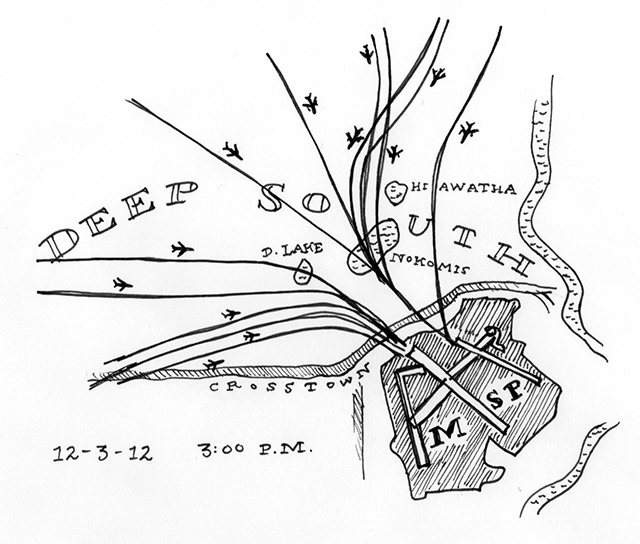 MinnPost illustration by Andy SturdevantIt’s possible to see aircraft roaring in all day and night for your entire life, and not really understand a thing about flight paths, final approaches, or much of anything about how, why and where aircraft pass over a city.

My friend Pete McLarnan used to live near 56th Street around Diamond Lake in what I sometimes call the Deep South of Minneapolis. Pete is a filmmaker, and recently completed a gorgeous gem of a film called “The Sound of Small Things,” about the fitful relationship between a newly wed husband and wife. (Disclosure: I donated to the film’s Kickstarter campaign.) The film was conceived and written while living in that neighborhood.

It’s set largely in one of those tiny cottages in Nokomis, in the city’s Deep South. It debuted at Slamdance last year, and will be streaming on a new film crowdfunding website called Seed&Spark later this week.

True to life in that part of the city, the film is saturated with aircraft noise. In nearly every single scene, even those shot indoors, there is the distant roar of a jet overhead.

“So much of the dialogue was improvised,” Pete explained. “And the planes became a part of that dialogue, like a third character. It always seemed to show up at the right time.” Onscreen, the actors pause, wait for the aircraft to pass, then continue. “It’s like an ever-present interloper in your life,” he adds. Anyone who has ever lived south of 46th Street knows about this particular interloper. Aircraft noise in south Minneapolis has been and remains a hot-button political issue. Mayor R.T. Rybak’s involvement in the community group Residents Opposed to Airport Racket (ROAR) was one of his earliest entrees into civic life.

As irritating as this residential airport racket can be – and I live in Powderhorn, which gets its own share of overhead air traffic – there is something vaguely romantic about the ubiquity of these jetliners, bringing in thousands of visitors to the cities every minute of the day. Vaguely romantic, not totally romantic. For this column, I am taking our usual examination of the physical and material culture around us, so often applied only to those items of interest within our sightlines, and pointing it heavenward. This is the first in a series of field guides to the skies of urban Minneapolis and St. Paul.

The majority of jets coming into Minneapolis-St. Paul International Airport (MSP) over the neighborhoods of the Deep South are operated by Delta Air Lines. These are easy to spot from the ground – each airline’s fleet sports a standard livery, or paint scheme for all its aircraft. With the exception of some of the smaller regional jets, Delta aircraft livery consists of a white fuselage, blue wing-mounted engines, a blue underside, and a blue tail, with a two-tone red wedge (known as the “widget”). In fact, these liveries actually have official names – the current scheme is called “Onward and Upward,” and its eight-colored predecessor, which apparently took much longer to paint, was known as “Colors in Motion.” I suppose cool livery names like “Screaming Vengeance” and “Here Come the Warm Jets” were already taken.

Other major airlines operating out of MSP are easily identified. American Airlines jets typically still sport polished, unpainted metal fuselages. United has white fuselages with a yellow stripe and a blue tail decorated with a yellow globe. US Airways’ livery is light gray and dark blue. There are nine other airlines operating out of MSP, as well, many with more lively liveries than these four. But most of the airplanes you see are from one of these airlines.

It’s possible to see aircraft roaring in all day and night for your entire life, and not really understand a thing about flight paths, final approaches, or much of anything about how, why and where aircraft pass over a city. I initially thought (naïvely, it turns out) that there must be some easy way to observe what direction the aircraft were flying in from, and then from there deduce what city they were coming in from. Like if a plane is coming in low and from the west, it must be coming from a nearby western city, like Sioux Falls or Fargo, right?

No. Of course not. Not even close. In fact, that’s ridiculous.

A number of aviation enthusiasts explained to me that by the time the aircraft has made its final descent into MSP, it has come in from a pre-determined point many miles outside the Twin Cities that has little or nothing to do with its city of origin. Most of the flight paths approach beacons in suburbs or exurbs like Afton, Anoka and Farmington. Wind direction affects which of the four runways are in use.

This doesn’t mean, however, that you can’t make some reasonable speculations about where the jets coming in overhead have come from. This is a very, very simplified guide to spotting various types of aircraft flying over you while you stand near Minnehaha Creek, trying to figure out where they’ve come from. Let’s take Delta’s fleet, for example. Delta operates a little less than 30 types of aircraft. The largest are the Boeing 747s, which have four wing-mounted engines. They look like this:

A 747 has a range of more than 7,000 miles and was introduced in the late 1960s. Apparently you don’t see as many of these coming out of MSP as you once might have. Delta operates daily flights from Narita International Airport in Tokyo, and while these once utilized 747s, they now are generally 777s. The 777 looks somewhat like the 747, but with only two wing-mounted engines.

Very likely, a craft like this would also be coming in from overseas as well. Amsterdam, Charles de Gaulle and Heathrow, for example, all of which have direct Delta flights. It might also be from a high-volume domestic airport, like Denver, O’Hare or Atlanta. The stories you might create in your head about the passengers on these planes may involve high finance, long-distance relationships, business deals, conferences, or cross-cultural exchanges of one kind or another. You can imagine the passengers on these planes have been sitting still for many, many hours.

Quite a lot of the air traffic, though, is connectors from regional airports, which typically utilize smaller aircraft, like the Bombardier Regional Jet CRJ-200ER, 700 and 900ER. They’re perhaps a little over half the size of a 777, and with rear-mounted engines. The CRJ-900 looks like this:

It’s probably come from a place like Minot, Madison or Wausau. It might be on a longer trip, stopping in at these smaller towns between here and Delta’s other hubs in Detroit or Memphis. The stories you might create in your head about the passengers on these planes may involve slightly less exotic but no less emotionally fraught situations, such as grandparents, or high school athletics, or breaks in the academic calendar.

This is an absurdly oversimplified introduction to a highly complex subject, one to which hundreds of informal clubs, Internet message boards, and international governing bodies have been devoted. Aircraft spotting and tracking is one of those subjects you could get as deep into as you wanted and still have lots to learn. (In fact, please leave comments if I have made particularly egregious errors here.) But even just a cursory understanding of the liveries, flight patterns and designs of our overhead neighbors goes a long way in adding some color and form to this specific breed of hyper-local noise pollution. It’s a distinctly south Minneapolis fact of life. We might as well claim some ownership over it.

An earlier version of this article incorrectly stated there are direct transatlantic flights between MSP and both Dublin and Frankfurt, and neglected to mention Amsterdam and Paris. It’s been corrected. Special thanks to Rob Hamilton and Bob Collins for their assistance.

Ask Andy questions on Dec. 19 at noon during our next MinnPost Live Chat.

When you hear the roar in south Minneapolis, look up to add color and form