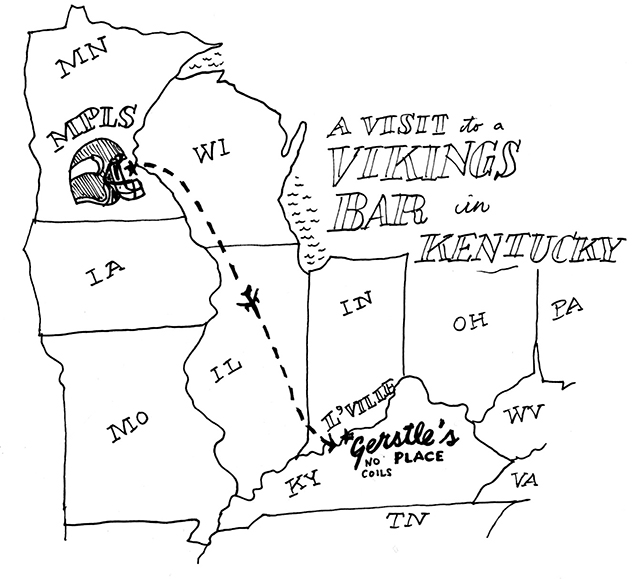 MinnPost illustration by Andy SturdevantOne category of football fan I don’t recall meeting a lot of growing up in Louisville, Ky., was supporters of the Minnesota Vikings.

If you’re a football fan and grew up in one of the 20+ American states with no NFL team, how did you determine your allegiances?

Was it simple geographic proximity? Familial roots? Aesthetic reasons related to color, mascot or logo? The team where your college’s star quarterback ended up? Some innate quality of that team’s perceived collective character? Stripped of the most obvious criteria – pride in one’s home state – how do you pick your team from afar? It’s not a decision to be made lightly; this allegiance, once established, can last for a lifetime. It may be passed down to your children!

When I was growing up in Louisville, Ky., football fans seemed to use geographic proximity as their primary criteria; most I knew seemed to gravitate toward either the Cincinnati Bengals or the Indianapolis Colts, squads from similarly Germanic cities located about an hour-and-a-half away. In the pre-satellite TV era, before you could take your pick of Sunday NFL games, it was the Bengals that dominated the local media market. Of course, nationally popular franchises also had their share of local fans, so it wasn’t unusual to meet fans of the Cowboys, Steelers or Patriots. Maybe a smattering of 49ers or Broncos fans, because they thought Joe Montana or John Elway were cool when they were growing up. But there was never any hegemony. Go to a sports bar on a Sunday, and there’s no mass consensus on who the room should be cheering for, unless there was a University of Louisville basketball game on. Then the TV would be changed to that, no matter who was playing.

One category of football fan I don’t recall meeting a lot of growing up was supporters of the Minnesota Vikings. Culturally, historically or geographically, there are not a lot of obvious connections between Minnesota and Kentucky. Other NFL cities like Chicago, St. Louis, Cincinnati, Cleveland, Indianapolis, Nashville, and even Pittsburgh and Detroit are closer and have more of a cultural presence; Minnesota may as well have been in Canada. Seeing a Vikings game on TV in Louisville before the 1990s would have been difficult. This is why I’d always been somehow surprised to know that there was a bar in the St. Matthews neighborhood, its interior decorated in purple and gold, where Minnesota Vikings fans met up every game day, and had been since the early 1990s. I’d only seen the inside two or three times, and never in season, but I’d heard about it.

I was back in Louisville over the Christmas holiday, so I decided to pay the bar a visit during the Houston Texans game two Sundays ago and see it for myself. To put this in a local context for you, St. Matthews is a little bit like Roseville, or maybe like the parts of Richfield near Edina – it’s an old first-ring suburb that’s been absorbed into the city proper. It’s where the two big malls are located, and has an arterial commercial street running through it. On this arterial street, Frankfort Avenue, you’ll find Gerstle’s Place, a neighborhood tavern that’s been on the block since the 1920s. The block is dense and old, located on an old streetcar line and filled with bars, restaurants and shops – it’s gentrified a little bit since I lived in the city, but Gerstle’s still has an excellent old neon sign out front boasting “NO COILS,” a reference to a substandard old-time method of cooling beer. It’s reminiscent of the corner bars you find in Northeast and St. Paul.

Sure enough, you walk inside and the décor is like that of any sports bar in the Upper Midwest. So was the clientele. The room was filled with about 40 fans, all in purple or white jerseys bearing familiar names: Peterson, Ponder, Allen, Page, Tarkenton, Moon. They were largely screaming their heads off. The only slightly incongruous aspect reminding me I wasn’t in Mankato or St. Paul or Moorhead was the presence of so many southern accents. That, and the lack of any Surly, Summit or Grain Belt Premium on tap. They did have Leinenkugel, though, so close enough.

If you saw the game, you know it was a great one. The Vikings are in control throughout, and crush the Texans at home 23-6. Consequently, everyone’s in a great mood. The attendees are more than happy to talk to me, and what I’d really like to talk about is the improbable journey of how a Kentuckian becomes a Minnesota fan. MinnPost photo by Andy Sturdevant
Dan McGowan has been involved with the Derby City Norsemen for many years, handing out gear, collecting donations for charity, and arranging fundraising raffles (though not meat raffles, surprisingly!).

I am referred to a fellow in a purple Santa Claus hat named Dan McGowan. McGowan has been involved with the Derby City Norsemen for many years. In the past, that’s meant handing out gear, collecting donations for charity, and arranging fundraising raffles (though not meat raffles, surprisingly!). They’d brought in many Vikings over the years, including Carl Eller and Chuck Foreman. Dan was born in Owatonna – “I tell people here I’m also from the south, because I grew up south of the Twin Cities” – and came to Louisville by way of the Army and nearby Fort Knox. He points out the other Minnesotans in the room, and explains that in the global economy, there are in fact some obvious Minnesota-Kentucky connections I’d not considered: UPS’ hub is in Louisville, bringing in people from all over, and it’s also the home to a large Ford assembly plant. About half the room seems to be Minnesotans brought to Louisville by work. Dan explains to me that, in an incredible, inexplicable microcosm of the Upper Midwest, there was for many years a Packers bar located across Frankfort Avenue called Dutch’s Tavern. Dutch’s closed recently, but the Packers fans migrated down the street to another nearby bar called Saints. For many years, the two fan clubs had traded a much-coveted and truly outstanding art object called the Grant-Lombardi Trophy back and forth – a mannequin’s head, wearing both a cheesehead and horns, painted half purple, half green, resting on a bed of Lombardi Field turf. I wish I’d seen it, but of course, the Packers had won the every match-up since 2009, so the trophy was still down the street at Saints. I also meet the current head of the fan club, a fellow named Jim Douglas. Like the other half of the fans in the room, Jim has no direct physical relationship to Minnesota, so has the true zeal of a convert. He tells me he’d grown up a fan of the Dolphins in Florida, but recalled a seeing a game as a kid where the Dolphins played the Vikings, and the Vikings utterly dismantled them. He fell in love with the opponent. “I love the way they played,” he says. “I loved the fans. They were rabid, but they weren’t jerks. They played hard-nose football, but they respected the opponent.” A number of other non-Upper Midwestern fans echo this sentiment: They loved the style of play, and they loved the fans. “Classy” is a word that came up a few times.

Jim invites me back next week for the biggest game of the year, against the Packers. I tell him I’m unfortunately going to be back in Minneapolis, but appreciate the invitation. Of course, the Vikings defeated the Packers on Sunday 37-34, so this week, for the first time in three years, the Grant-Lombardi Trophy rests among the Vikings paraphernalia at Gerstle’s on Frankfort Avenue in Louisville, Ky. That is, until potentially next Sunday, at least, when the Vikings meet the Packers once again at Lombardi Field, and the fate of the Grant-Lombardi Trophy and bragging rights for Kentucky-based fans of the Vikings – ex-pats and converts alike – is up in the air yet again.

How does a Kentuckian become a Minnesota Vikings fan?