“Minneapolis, huh?” asked a Milwaukee artist I met this weekend when he asked where I was from. “Minneapolis is one of the perks of living in Milwaukee.”

This past weekend I was in Milwaukee, having been invited by a local curator to exhibit in her mobile gallery space. It was a quick trip, and I spent most of my time in town working on the show and making borscht for gallery-goers. On Sunday, though, I finally got to see a little bit of the city and some of its art spaces. It gave me a chance to further investigate the nature of this perk the artist described, because I’d had a similar notion on the bus ride down. “I should come to Milwaukee all the time,” I thought, somewhere on 94 past the Wisconsin Dells exits. “It’s so close.”

I asked the Milwaukee artist to expound on the idea. “Well,” he explained, “it’s only about a five-hour drive. I go there all the time. Chicago and Minneapolis.” He then repeated his central thesis: “The perks of living in Milwaukee.”

Unlike the other cities I’ve written about in The Stroll, such as St. Louis and Philadelphia, Milwaukee seems like it should be the most familiar. It’s perhaps the closest large city (one of the very few, in fact). It’s also the one that seems like it should share the most cultural similarities with Minneapolis and (especially) St. Paul: Midwestern cities full of Germans, beer and abandoned factories. Milwaukee feels like a cousin.

Well, sort of. Not a close cousin, like the kind you spent every weekend with growing up. Maybe a more distant cousin that shares a vague physical resemblance, but that had a much different upbringing than you and your siblings, and that you only saw on holidays. Milwaukee, seen from the ground, actually resembles a stereotypical eastern city quite a bit more than the spread-out prairie settlement that Minneapolis sprang up from. The blocks are tighter, the buildings closer together, the architecture older. There doesn’t seem to be as much glass or brutalist concrete or asphalt. It calls to mind parts of Northeast or St. Paul, but with even more bars and more churches (if such a thing can be imagined).

The artists’ culture in Milwaukee seems to draw on these advantages — the denser neighborhoods, the older buildings. Or the parts I saw, anyway. One afternoon isn’t a long time, but I got a great tour of some highlights from Ashley Janke, artist-in-residence at the Lynden Sculpture Garden this year and proprietor of the nABR gallery. You can print this guide out, book some Megabus tickets, and use it as the Twin Citians’ guide to the independent galleries of the Cream City. Utilize those perks!

Our first stop is in the Bay View neighborhood on the city’s south side. Sky High Gallery is in the back of Sky High Skateboard Shop, located in an attractive wedge-shaped commercial building located across the street from a church and an auto garage. One of the proprietors of the shop and its art curator, Faythe Levine, lived in Minneapolis for a little while, but has lived in Milwaukee for more than ten years. 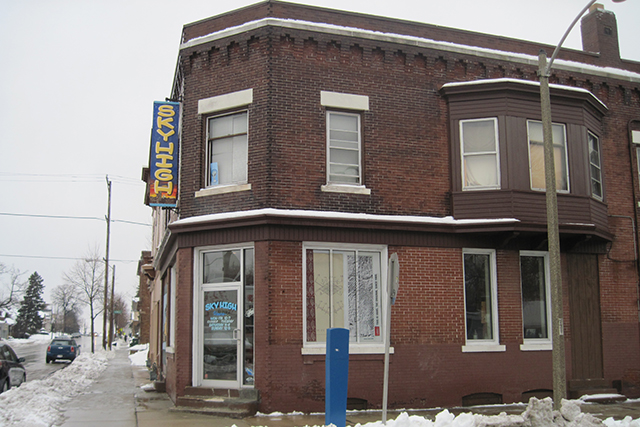 The gallery is marked with old-school, hand-painted signage. This is an art form Levine know something about — she recently co-authored a wonderful book called Sign Painters. It’s a collection of interviews with and photos of work by old-school sign painters, the type that use lead-based paint and hand-letter commercial signage on glass and brick.

It included two Minneapolis-based sign painters whose work you’ve undoubtedly seen around town, Forrest Wozniak and Phil Vandervaart. Between the two of them, they’re responsible for virtually all the best signage around Twin Cities neighborhoods: Kramarczuk’s, Palmer’s, the Trylon Microcinema, Choo Choo Bob’s on Marshall Avenue, May Day Café, and the multistory painting of F. Scott on the side of the Fitzgerald Theater.

I was hoping to catch Faythe and ask her about how running a small shop located on a corner influenced her interest in hand-painted signage and the confluence of art, craft and neighborhoods, but she was out of the country during my visit. Maybe next time, although the influence is obvious.

The front half of Sky High is a skate shop, and the back is the gallery space (presently showing some witty drawings and prints of scenes of generalized urban dystopia by Milwaukee artist Colin Matthes). Not only do the two components seem naturally integrated — in fact, there is a great graphic collage in the bathroom, between the two spaces that seems to summarize the history of skateboarding in Milwaukee, and acts as half-advertisement for the shop, half social history bridging the two — but the shop itself feels like a functional part of the neighborhood. Just your friendly neighborhood skate shop/art gallery. MinnPost photo by Andy Sturdevant
This collage seems to summarize the history of skateboarding in Milwaukee.

Next up is the Green Gallery, a nationally well-known contemporary gallery located on Milwaukee’s Lower East Side. It’s located in what looks like a drive-up Laundromat or service station, but which I am told later was once a pizza shop. The current show is work by New York-based artist Tony Matelli; I especially enjoy some works created with stencils on mirrors that seem to me to refer somewhat mischievously to the language of quasi-mystical self-expression that informs a lot of conversation about post-war painting. MinnPost photo by Andy Sturdevant
The Green Gallery is located in what looks like a drive-up Laundromat or service station, but which I am told later was once a pizza shop.

I also enjoy the building itself quite a bit. As I noted in a column last year about East Lake Street, one of the challenges Midwestern artists will have to face in the coming decades is how to adapt buildings so explicitly created for car dependency — spaces like garages and car lots and drive-ins — into spaces that can exist on a human level, spaces that feel a part of the urban fabric. The Green Gallery space is a modest, practical answer to that question.

The last stop on the tour is a somber one — it’s the shell of a space in the Riverwest neighborhood that once housed, among many other things, a second location of the Green Gallery, a converted video arcade game that showed experimental films, and the studios of a large number of young artists. In 2012, a fire started on the ground floor, and quickly gutted the entire building. The telltale black streaks left by the smoke still mark up the side of the building. Fortunately, no one was injured, although a number of the artists living and working lost literally everything but the clothes on their back. MinnPost photo by Andy Sturdevant
In 2012, a fire started on the ground floor, and quickly gutted this entire building.

My guide Ashley tells me about the artists that were displaced, and the work they were doing, and I feel awful. I’d met a number of them over the course of the weekend, but after seeing the building and the visceral punch of hearing the story about it, I’d liked to have spent more time in town and see how they’re doing, what sort of work they’re making and what spaces they’re reclaiming.

Then I realize, of course, that’s one of the perks of living in Milwaukee: Our cousins are only a quick trip down 94 away. It’s easy to make a return trip.