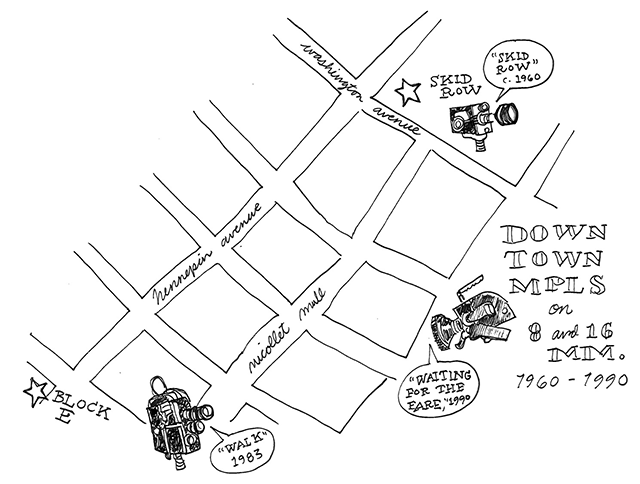 MinnPost illustration by Andy Sturdevant
Walking around the city is its own form of private cinema.

In a recent post on my friend and fellow strolling enthusiast Bill Lindeke’s blog Twin Cities Sidewalks, he quotes a suggested “sidewalk game” from Phil Smith’s 2010 book Mytheography: A Guide to Walking Sidewalks: “In your head re-shoot movie scenes using your own city as location. Let your memory of movie landscapes bathe the places you pass through. Hum a soundtrack.” Lindeke pairs the quote with one of artist Cindy Sherman’s Untitled Film Stills, from the brilliant landmark retrospective of her work that just closed at the Walker Art Center. Sherman’s genius in this particular series was taking Smith’s concept of total, private immersion in cinematic landscapes, and expressing it in pictorial form, casting the self (or, more specifically, herself) as a cinematic hero.

Walking around the city is its own form of private cinema. I thought this week we’d look at three short films, all shot on 8mm or 16mm film around Minneapolis and now available for free on the Internet, in which filmmakers took up cameras to document the private and public movies happening on the sidewalks around them.

The first documents the streets as seen from the front of a cab (the “Blue and Black” taxi company, a nice inside joke for locals). Keith Froelich’s 1990 “Waiting for the Fare” is an odd, often funny, frequently queasy short film that’s either a very dark satire of proto-Tea Party backlash politics, or an embodiment of it. Or possibly both. The plot of the film is a little bit like “Taxi Driver,” if Travis Bickle, fed up with the crime, urban decay and sleaze that surrounded him, had, instead of shooting Harvey Keitel, decided to run as an Independent Republican for Linda Berglin’s State Senate seat. (Another deep, deep inside joke for locals: Froelich’s DFL opponent in the film is named “Brenda Gurglin.”) The film seems to have been based on true-life events, as Froelich actually did run for State Senate in the old 60th District in 1986. Froelich’s taxi driver is disgusted with what he calls the city’s “rotting insides”: an urban hellscape collapsing under the weight of crime and welfare fraud, hastened along by “the social revolution of the 1960s” and “lackadaisical law enforcement.” As noted, it’s difficult to tell if the intent of these complaints is satirical or sincere.

Before Froelich begins his anti-crime political crusade, however, there is some great footage of downtown and industrial parts of Northeast, as they appeared right before the final wave of revitalization scrubbed out the remaining vestiges of the old Block E. The shiny, brand-new Wells Fargo Center looms over most of the action, but the landscape below it looks devastated – there are multiple shots of demolition sites, particularly around a crumbling brick structure I don’t recognize. Froelich’s intention in shooting burnt-out industrial sites and shabby stretches of Hennepin Avenue (populated equally by imperious yuppies and chainsaw-wielding psychopaths) is to make Minneapolis appear as seedy and decaying as possible. Viewing the footage decades later, though, it actually has the opposite effect. Seeing structures like the old Leamington Hotel, featured prominently in one of the film’s short narrative digressions and torn down the year of the film’s release, doesn’t make you think of a city in permanent decline. It instead seems like a lost landscape that may be, from a contemporary perspective, a little scruffy but perfectly salvageable and quite romantic.

The next is a film called “Walk,” a 16mm film by Geoff Seelinger from 1983. “Walk” is almost exactly what it sounds like: a first-person walk from Uptown via Hennepin, Lyndale and Nicollet to downtown on foot, with an anxious, thrumming soundtrack composed from the sound of feet hitting pavement and traffic noises. It begins and ends with its subject struggling to enunciate basic language, with 20 minutes of wordless drifting and hand-edited segues in between.

Sights of lost Minneapolis are numerous: the pre-Treehouse Records Oar Folkjokeopus, Twin Cities Reader boxes, red Metro Transit buses, Shinders, Peavey Plaza, the Women’s Art Registry of Minnesota (WARM) Gallery, Dayton’s, and – as in Froelich’s film – the old, seedy Block E, with Moby Dick’s, Brady’s Pub and various adult booksellers accounted for. Other things are very unchanged, even 30 years later: echoing saxophone strains on Nicollet Mall, the IDS, the Uptown Theater (playing “A Passage to India”), the way I-94 noisily slices a trench under Nicollet. Even that vacuum supply shop that is still on Lyndale looks oddly unchanged. It’s all still recognizably Minneapolis, as you might experience it today, but with many subtle differences. The film’s total commitment to the idea (and the soundtrack! The melody using the car horns on Nicollet Mall is especially striking) makes it a success as a piece of art. However, it succeeds equally as a piece of folk history in a way I wonder if Seelinger could have even anticipated when he made it. Non-editorial, comprehensive footage of the sights and sounds of everyday life on city sidewalks, in the era before the handheld devices that have made public life a more literal ongoing film, is very rare. Having this footage three decades on is invaluable.

The final selection is probably one of the all-time great Minneapolis films, and one that deserves to be seen on 16mm, if possible: Johnny Bacich’s “Skid Row.” Bacich, known also as “Johnny Rex,” recently died; during the 1950s, he owned the Sourdough Bar on Washington Avenue near Hennepin, then known as Skid Row. The area was filled with semi-employed day laborers and single men who lived in the flophouses that lined Hennepin Avenue, and spent their days drinking. Bacich shot hours of 8mm footage of them, which was assembled later by Twin Cities Public Television and given some touching stream-of-conscious narration from Bacich many decades later. (I saw it at the Trylon Microcinema last year, projected by my friend Peter Schilling, who wrote a lovely tribute to the film a few years ago here.)

Watch Down On Skid Row, A Tape’s Rolling! Special on PBS. See more from KTCA.

The denizens of Skid Row are characters in the classic sense – alternately sad, pathetic, violent, pitiable, funny and relatable. Bacich’s narration is conflicted; he feels compassion for these men, but he doesn’t pity them. He doesn’t endorse their lifestyles, but doesn’t condemn them, either. Pockets of poverty and violence still exist in the cities today, but they’re pushed from view. Block E, as we have seen in the preceding two films, was the heart of downtown. Having a massive crowd of rowdy, drunken men living and drinking so close to the central business district seems unthinkable in the downtown of today.

Unlike the other films here, the footage in “Skid Row” really does seem alien from a contemporary perspective, as though it was filmed in a completely different city. In fact, the 20  years that had elapsed between “Skid Row” and “Walk” had changed the face of Minneapolis infinitely more than the 30 years that have passed between “Walk” and now. Seelinger’s Minneapolis is, like the city we live in today, still dominated by freeways, parking lots, and hulking, concrete structures. It still seems familiar. Bacich’s Minneapolis is still largely a dense, two-story city, covered in handmade signage and garish neon. It’s almost impossible to orient yourself to the surroundings based on landmarks.

It’s a Minneapolis that seems at once livelier and more horrifying. Whatever we make of it, it’s a city that’s long gone and isn’t coming back. In capturing this city, Bacich didn’t set out to create a cinematic masterpiece. He simply looked out on the sidewalk outside his bar, picked up a camera, and recorded it. If he has an editorial agenda, it is this: “In another 30 years,” he predicted, “people will want to know what happened on Skid Row.” He was right.