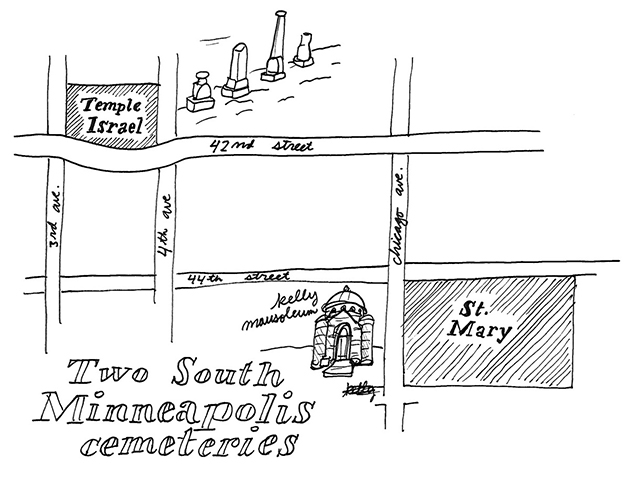 MinnPost illustration by Andy Sturdevant
Walking in a cemetery at the end of winter is a novel experience.

Within about a 20-minute walk of each other in the quiet neighborhoods of south Minneapolis, there are two beautiful urban cemeteries dating to the earliest years of the city: St. Mary’s, a Catholic cemetery at 44th and Chicago, and Temple Israel, a Jewish cemetery at 42nd Street and 3rd Avenue.

Like Lakewood Cemetery to the west and the Minneapolis Jewish Cemetery and United Hebrew Brotherhood Cemetery to the south — all subjects of previous Strolls — the small cottages and stucco and wood frame prewar houses that surround St. Mary’s and Temple Israel are a testament to the city’s rapid expansion in the early 20th century.

St. Mary’s was established in 1873 by the Church of Immaculate Conception (later the Basillica), and Temple Israel three years later by the Shaarai Tov congregation. At that time, these plots were located in bucolic parts of a very young city. Both congregations were home to a large number of European immigrants, recently arrived in the young state from the cities of the East, or directly from Europe — Germans and Russians in the case of Temple Israel, and Germans, Irish, and Italians in the case of St. Mary’s.

Walking in a cemetery at the end of winter is a novel experience. By the end of the season, the snow on the ground has remained mostly undisturbed, and frozen all the way through, layer upon layer. In fact, it’s so tightly packed in most places that it can support your weight if you walk carefully enough across it, giving you the mildest sensation of floating. Of course, if you put your foot down with too hard, your leg goes through and you’re up to your mid-calves in snow.

You can also see footsteps around you, and you get a sense for which graves have had visitors, and which have not. You find desire paths, also known as social trails — paths carved out not by conscious design but by intuitive foot traffic covering the shortest distance from point A to B. You have a clear sense, in the snow, of how people experience these cemeteries — how they walk in from the main road, how they navigate between rows, and where they stop in front of each grave. MinnPost photo by Andy Sturdevant
The almost streamline moderne red and black marble mausoleum for the Lo Pesio family is a highlight of St. Mary’s.

St. Mary’s is a cemetery with very modest funereal architecture. The sort of elaborate memorials in Lakewood, which architectural historian Larry Millet described as containing “the city’s Protestant elite,” aren’t anywhere to be found here. There are some striking mausoleums here, however — family names such as O’Connor, Neumeier, and Sanzone reflect the ethnic groups that made up the city’s early Catholic population. Some other highlights are an almost streamline moderne red and black marble mausoleum for the Lo Pesio family, and a gorgeous Richardsonian Romanesque burial chamber for the Kelly family. At one mausoleum, there is a bouquet of flowers and some carefully crushed beer cans left on the steps — hopefully the sincere offerings of family members having a tipple with their granddad or grandmother, and not idle teenagers looking for a quiet place to drink. In the center of St. Mary’s is a memorial to fallen firefighters, erected by the Minneapolis Fire Department Relief Association in 1892. On each of the four sides of an obelisk are a list of firefighters, beginning with First Assistant Chief Engineer Cornelius Fredericks, killed in a mill explosion in 1881 (“his death caused universal sorrow in Minneapolis, where his memory will be fondly cherished so long as any of the ‘old guard’ live to recount his gallant deeds,” says one contemporary source). The last listed is Ray C. Shaughnessy in 1967.

Atop the obelisk is a sculpture of one of the “old guard,” the type of 19th century Cornelius Fredericks probably resembled: wearing a jaunty mustache, a three-quarter length double-breasted coat, and a kepi cap. His hands are clasped and he steps forward, looking respectfully mournful in the presence of his fallen comrades, but also with that sense of bravado one imagines in firefighters of that period. Nineteenth-century firefighters were generally volunteers, and often loud, boisterous, thrill-seeking hellraisers. Early Minneapolis was a fire-prone city, whose structures were primarily wood, and full of flour mills generating enormous amounts of dust that, if ignited, could and did blow up whole city blocks. The firefighters that responded to these very dangerous mill fires, for no pay, would have to possess a certain mustachioed sense of frontier derring-do and fearlessness in the face of danger. MinnPost photo by Andy Sturdevant
The entrance to Temple Israel Cemetery is marked by a gorgeous red sandstone chapel and gatehouse.

Twenty minutes away on foot is Temple Israel Cemetery, on a small plot of land between 3rd and 4th Avenues, just north of 42nd Street. The entrance is marked by a gorgeous red sandstone chapel and gatehouse, designed by the wonderfully named Septimus J. Bowler in 1894. Bowler was an architect that the cemetery’s comprehensive online history describes as “apparently self-taught,” and who would go on to design a number of other noted houses of worship around the city. He was commissioned to design the structure by the Montefiore Burial Association, a group of prominent Jewish Minnesotans named for the English financier, philanthropist and proto-Zionist Sir Moses Haim Montefiore. According to Jewish custom, deaths traditionally occur in the home, with a funeral procession carrying the body to the cemetery. Until Temple Israel, the only Jewish cemetery in the Twin Cities was located near Lake Phalen in St. Paul; apparently, when a funeral procession became lost in a snowstorm making the 3½-hour walk out there, the leaders of the Minneapolis Jewish community decided it was time to establish a cemetery closer to town.

MinnPost photo by Andy Sturdevant
In the winter, the planters are turned to their side to prevent snow from getting in.

The scene at Temple Israel is quiet. Many of the gravesites are flat, covered with snow for the season and with planters in raised metal support structures over them. In the winter, the planters are turned to their side to prevent snow from getting in. Row after row of these sideways planters, all facing the same direction, create a strangely mournful visual effect against the snow. I wondered, in fact, if it might be part of a funereal custom I’d not been aware of. No, it’s only simple maintenance — they’re just on their sides for the winter.

A few of the headstones have stones across the top left by visitors, in the Jewish custom. The symbolism on the markers represents a full range of community involvement — a Masonic square and compass here, a seal of the Woodmen of the World there. A few headstones note the person’s place or birth and death, suggesting fascinating narratives of movement across the time and space. One gravestone memorializes a woman named Theo Auerbach, who was born in Troy, Ala., in 1879 — a state not noted for its Jewish heritage. Was she an Ashkenazi Jewish émigré from rural Alabama? According to Lee Weissbach’s “Jewish Life in Small-Town America,” a researcher named Harry Linfield identified Troy, Ala., as a “principal [Jewish] community” in 1927, though Troy had a population of about 30 Jews at the time (a number that sits at 0.0% today, according to the U.S. Census). It’s interesting to speculate what circumstances might have compelled Theo’s unlikely journey.

In a few weeks, both of these urban gems will be colorful again, covered in flowers and decorations and green sprouts of grass. In these last weeks of winter, though, you might take some time to walk across them, tracking the footprints of visitors who’ve come in the quietest part of the year to pay their respects to their loved ones. You can also track the strange and wonderful journeys that occur over the course of a lifetime, as evidenced by the inscriptions you find.