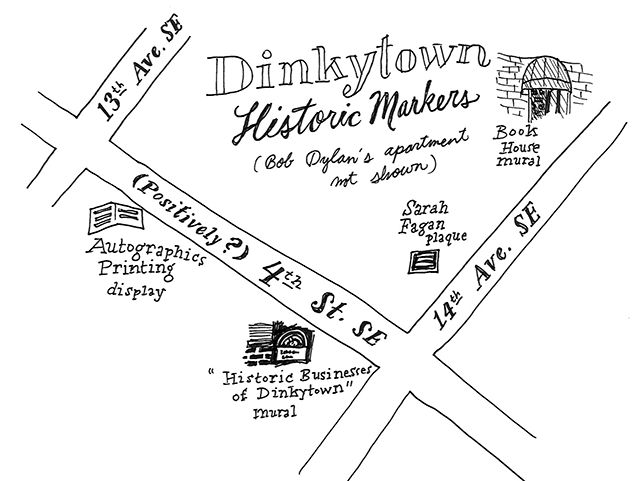 MinnPost illustration by Andy Sturdevant
Few neighborhoods have as clear a sense of their own history as Dinkytown.

In a recent Minnesota Daily article about the fight over a planned apartment complex in Dinkytown, House of Hanson grocery store owner Laurel Bauer says this: “Everybody is still riled up. People don’t like change. They want Dinkytown to stay exactly as it looks.”

You could interpret this as a criticism – which is how I think Bauer intends it – or as a point of pride. People are protective of Dinkytown, and for good reason. Few neighborhoods outside Summit Avenue have as clear a sense of their own history. Within a one block radius around 4th Street and 14th Avenue last weekend, I came across no fewer than four public markers commemorating very specific aspects of the neighborhood’s history. Not official markers dreamt up by a bureaucrat somewhere, either, but markers put up by local storeowners and residents of their own accord. I defy you to tell me any neighborhood in Minneapolis or St. Paul with a similar density of homemade historical markers. I can’t think of any.

The best part is, these markers commemorate not dull historic events or great statesmen, but the most mundane aspects of everyday life around the margins of a major university: Coffee shops! Restaurants! Student hangouts! Most fascinating and emblematic of this celebration of everyday history is a marker near 4th and 14th commemorating one Sarah Fagan, “pioneer Southeast resident and entrepreneur” – and today, an exceptionally obscure figure.

How obscure? I sure didn’t turn up much information about her. Sarah Fagan seems to have been born right in the neighborhood in 1893. An 1895 state census lists her place of residence at 417 4th Ave. SE, less than a mile from Dinkytown. Three more short stories about the life of Sarah Fagan gleaned through publicly available online records: a court record about a rent dispute from 1937 indicates she owned a store nearby; a few city directories from the ‘40s and ‘50s list her and her brother Edward living on Walnut Street, near the University of Minnesota Medical School; and some public U of M real estate records indicate that property on Walnut was acquired from her and Edward by the U through “condemnation” (that is, eminent domain) in the late ‘50s.

That’s about all my amateur-hour Internet sleuthing can turn up. As the plaque indicated, she died in 1989, and she is buried in St. Anthony Cemetery on Central, but I couldn’t find an obituary in the Star Tribune. Sarah Fagan seems to have lived a full, almost century-long life in and around Southeast Minneapolis. Who was Sarah Fagan? She was a neighborhood person, probably someone Dinkytown residents encountered in shops and restaurants and sidewalks every day for eight decades. Sarah Fagan is the sort of public figure I wish there were more tributes to on the walls and street signs of the cities. MinnPost photo by Andy Sturdevant
Autographics Printing on 4th has a nice diorama of landscape photographs of 4th Street and Dinkytown in 1995 in its front window.

Looking into the more recent past, Autographics Printing on 4th has a nice diorama of landscape photographs of 4th Street and Dinkytown in 1995 in its front window. Not so long ago, it seems, but even in the past 18 years, the streetscape has changed dramatically. Back then, the Loring Pasta Bar was still located in Loring Park — the building was occupied by Gray’s Campus Drugstore, capped off with a horrifically ugly yellow awning. In fact, near the Loring Pasta Bar, there’s a mural immortalizing “Historic Businesses of Dinkytown.” Among them are the Campus Cobbler, Discount Records, and the Dinkytown Diner. The Loring Pasta Bar’s building has the name Grodnik carved in cement over a doorway – also depicted in the mural. “Grodnik” was the name of an early owner, and also supposedly Russian for “Diminutive Town,” where the surrounding neighborhood gets its name. The Book House, at 14th Avenue, is one of the businesses that may be displaced by the apartment-complex development. Inside, over the stairs, there is a very similar sepia-toned mural, also depicting a different set of historic Dinkytown businesses, painted by Sherri Faye and based on a 1959 photograph by Mike Justen. It shows few long-gone landmarks, such as the Ten O’Clock Scholar, best-remembered as the coffee shop where Bob Dylan got his start, as well as Sammy D’s Italian Food, a red-and-white-checkered-tablecloth-style restaurant once located across 4th Street where the Library Bar stands now. The restaurant was co-owned by a Northeast Minneapolis-born woman named Giovanna D’Agostino, but known locally as Mama D. Mama D. cooked meals for Dinkytown college students for decades. I actually have a copy of her 1974 cookbook, “Mama D’s Italian Cooking … with a Pinch.” It’s a very sweet book. Between recipes for Lobster Fra Diavo, Zucchini al Acedo and Baked Lasagne al Forno, she tells stories about the neighborhood: “Dinkytown has a lot of heart. A kid comes here from New York or California and doesn’t have anything – you can be sure all he has to say is he has no place to go, and he’ll have three or four offers from other kids. They’ll take him home and let him stay overnight,” she writes. “I don’t think you could do that in any other town.”

Oddly, it’s that transitory nature of students coming and going over many decades that gives Dinkytown its sense of history. I sense an almost educational quality in a lot of these works: You live here now, they say. But there were a lot of things that happened before you got here, and you should know about them. You should know about Sarah Fagan and Mama D. and the Ten O’Clock Scholar.

There are no didactics for any of these murals, of course – you wouldn’t know what the Ten O’Clock Scholar or Sammy D’s or Grodniks or the Campus Cobbler were unless you’d read about them, or – more to the point – you’d asked someone about them. Every college student who lives within three blocks of the Loring Pasta Bar thinks Bob Dylan once lived in their apartment building, and they think that because someone told them they thought they’d heard that somewhere. That’s how these stories are transmitted – kids move into the area, and they sit in those bars and coffee shops and sidewalks and talk to older students, professors, shop owners, townies, or other notable figures like that guy wearing the peacock feather and felt hat who’s always hanging around the Kitty Kat Club. And they hear the history of the place from these people, and they realize, yes, I live here now, but there were things happening before I got here, and it’s important I know about them.

And in 50 years, maybe one of those kids has a plaque on a wall on 4th commemorating him or her as a pioneer.

Dinkytown has a clear sense of its history