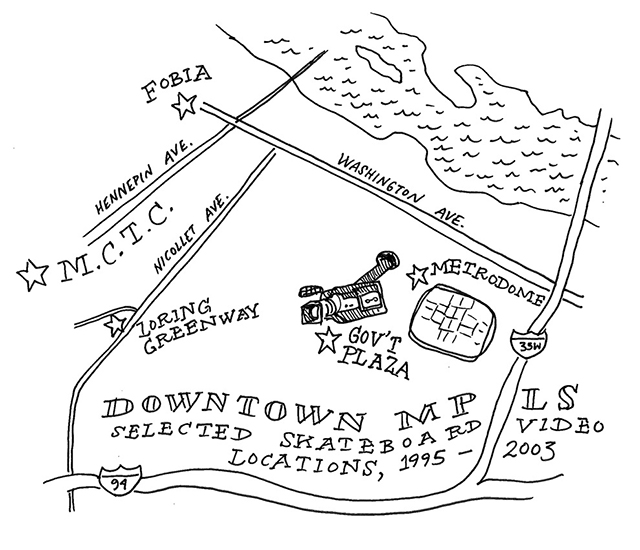 MinnPost illustration by Andy Sturdevant
This emergence of a local skateboarding video aesthetic and its accompanying scene coincidentally aligns with downtown Minneapolis’ 1990s nadir: the city as a gray, featureless, largely empty placeholder.

I was once talking to a professor about public spaces and how artists use them. At some point, the topic of skateboarding — that most public of activities — came up. He mentioned that his sons had gotten into skating when they were teenagers, and had subscribed to Thrasher magazine. He’d thumbed through a few copies they’d left around the house. “The most ridiculous thing about it,” he said, suddenly becoming very irritated, “is that it featured reviews of the concrete in various cities. I thought it was about the most pointless thing I could think of.”

This made me very, very depressed. How could someone with an interest in urban spaces find such a topic anything but fascinating? A little specialized, sure, but paying attention to those sorts of nuances is what makes experiencing a city so enjoyable. Show me a person who can tell you the differences between regional concrete surface qualities, and I will show you a person that is highly invested in their surroundings.

Last week I wrote about three filmed experiences of Minneapolis, shot on 8mm and 16mm before the advent of digital cameras. In thinking of other amateur filmed documentation of the neighborhoods and sidewalks of the cities in the pre-iPhone era, a few people suggested I watch some skateboarding videos.

Skateboarding videos are their own very specific subgenre, with its own history and set of conventions largely unknown to people outside the culture. A number of well-known film personalities, like director Spike Jonze and actor Jason Lee, have come out of the skate video culture since the 1990s, but for the most part, it’s culturally invisible to non-skateboarders. Starting in the 1980s, skateboard videos are guerrilla-style documentation of skateboarding, made by enthusiasts and for enthusiasts. They generally feature well-known skateboarding personalities on location across the United States, focused primarily on the action, but with some loose narrative elements mixed in – interviews, music, and often some woolly, anarchic humor (for example, the early landmark “Video Days,” directed by Jonze in 1991, ends with all the featured skateboarders driving their Oldsmobile into a pile of rocks to their grisly deaths). Pre-Internet, videos were sold through skate shops and mail-order catalogs, and passed from person to person on VHS cassettes.

I spoke to Mike Munzenrider and Tucker Gerrick about the history of Twin Cities skateboarding videos. Mike is a staff writer for The Skateboard Mag, has written about skateboarding for ESPN, and maintains Platinum Seagulls, a skateboarding culture blog. Tucker was the co-founder of Familia Skate Shop in Uptown Minneapolis. Both of them assembled a comprehensive list of Twin Cities skateboarding videos for me, and walked me through their personal history with them. Mike bought his first in 1998. There was a guy at his local skate shop with a backpack full of $10 tapes, he said. “We bought one” – splitting the cost at five dollars each – “and had a sharing plan. We each had a day with the video.” The video was “Apocalypse.” Mike was 17 years old.

One of the first locally produced and distributed videos Mike was aware of was one created by Fobia Skate Shop in the mid-1990s.  Tucker had been involved in Fobia, which was located at Washington and First Avenue downtown; he was living nearby in the Sexton Building (“it had all these artists, some private eyes, some weird hoarders”). A lot of early videos were commissioned by skate shops by teams made up of core customers, and sold only there – what Mike calls “the craven marketing aspect.” At that point, Gerrick says, “you could save up for a summer and buy a Hi-8, and one thing led to another – that Fobia video solidified the cool factor of the shop, and gave these guys something of their own.”

But apart from those, there were always amateur videos: “There are clips out there from the early ‘90s of some of our legendary guys skating on the old Federal Building at Nicollet and Washington,” says Munezenrider. “Sometimes someone’s got a little cache of Hi-8 or VHS tape and it’ll turn up on YouTube. But a lot of that wasn’t that documented.”

By the late 1990s, with video cameras much lighter and more accessible, a wealth of local skate videos was available, many shot downtown – titles like “Apocalypse,” “Midopoly,” “Poached,” “Feature Film.”

“It goes hand in hand with the photography,” says Gerrick. “You can’t document it right unless you’ve been a skateboarder. It doesn’t matter if you’re the best filmmaker in the world, you won’t get the angles right. It’s like filming interpretive dance, where you’re filming the action against a larger backdrop. You’re not focusing on the individual body parts, you’re focusing on the whole scene. And instead of a stage, your backdrop is these glass and marble buildings.”

This emergence of a local skateboarding video aesthetic and its accompanying scene coincidentally aligns with downtown Minneapolis’ 1990s nadir: the city as a gray, featureless, largely empty placeholder. Watching footage from these videos, one is struck by how few people seem to be around. Downtown can still feel empty and gray much of the time, but even in the past 10 years, it seems as if it’s become much livelier than what we see in some of this Sharon Sayles Belton-era footage. It’s bleak enough so as to be positively East German.

“On the weekends, there’s no one. After six, there’s no one. There’s a mass exodus at 6:30,” says Gerrick. “If skateboarders were visiting from out of town, you’d tell them, ‘Head into the middle of downtown, and it’s a playground.’ At the peak of national popularity from a media and sales standpoint, as far as core enthusiasts, it actually got hard to go downtown; there were so many people skating there.”

One of best parts of watching skateboarding videos is that you see parts of the city not typically captured on film. The best surfaces for skating are also the ugliest, most unglamorous parts of the postwar city: parking lots, concrete embankments, garages, ugly brutalist plazas, benches, stairways. It’s the places most people never think to get on camera, despite the fact that they’re such a major part of the urban experience – especially in a place like the downtown Minneapolis of the 1990s, which is nearly all parking lots and ugly brutalist plazas. Watch enough videos, and you start to see the city in a more utilitarian light. You begin to see these really unattractive areas – almost always deserted – in a much more poignant way. They seem bleak, empty and terrible for most civic functions, but they sure do seem excellent for skateboarding. The excitement you get from the skating footage makes the spaces feel much more activated and interesting than what you typically experience, hustling through them from parking lot to skyway.

“Growing up just outside the city, in Circle Pines,” Gerrick says, “I could see a video and see these buildings downtown, and I could say, ‘I saw a building like that!’ And then you’d borrow someone’s car on a Saturday and skate around looking for that particular building that someone has skated on. As a teenager, that’s super-exciting. If there’s anything about skateboarders, it’s that they’re really passionate about the world they live in. I don’t think that specifically was the purpose of the videos, but I think they served to create this mental and visual map. You want to know where to go in the city, ask a skateboarder. I can tell you which streets have manholes that smell more, or the streets where the cracks are deeper. It may be all the way across town, but I know to the square foot where it is.”

A lot of the classic West Coast skate videos are shot around picturesque suburban Southern California, near beaches, with palm trees swaying in the background. Not so in their Twin Cities counterparts. In fact, the parts of the city that most people are least likely to want to brag about to outsiders – the wide swaths of concrete, the abandonment – become the best selling points.

“One thing about Minneapolis videos – and you know this from walking around downtown – is that all of this is taking place within 20 blocks,” Munzenrider says. “To a certain extent, you want to show, ‘Hey, the Upper Midwest, cold city, but we’re here, too. We have this really great downtown area – or we did, 10 years ago – that is really overlooked. Surprise, we’re up here!’” In a sense, it’s a testament to the adaptability of how people use cities. Any weakness can become a strength.

Many of the areas documented in some of these early films – the plaza around the Metrodome being a clear example – will be gone in the next few years. They’ll be largely unmourned, too. But if you really think about how little intentional, pedestrian-level documentation there is of these spaces, it makes these videos all the more interesting.

Above all, though, the videos serve to document an active and vibrant local subculture in its early stages.

“We’d forever joke that there’s absolutely no money in it, there’s no good reason to make it other than you want to it, and you want to make it happen,” Munzenrider concludes. “It’s got to be a labor of love.”

Skateboarding videos create ‘a mental and visual map’ of the city