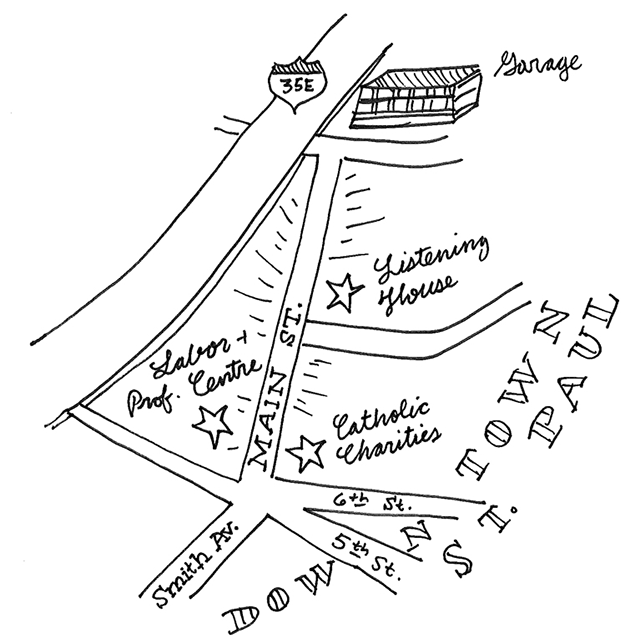 Which street, would you say, is downtown St. Paul’s Main Street? Seventh? Good argument there – Seventh is its first street, forming the backbone of the oldest part of the city. Maybe Kellogg? Kellogg runs the length of downtown, hugging the river, and the major numbered streets begin there (Kellogg is Third, and there remains a vestigial Second running two blocks to the south). MinnPost photo by Andy Sturdevant
I hadn’t been aware St. Paul had a Main Street until somewhat recently, passing it on West 6th Street on a 94-bound bus one day and noticing it out the window.

I hadn’t been aware St. Paul had a Main Street until somewhat recently, passing it on West 6th Street on a 94-bound bus one day and noticing it out the window. Main Street begins at 6th, running two blocks north until running headlong into the St. Joseph’s Hospital parking garage at 10th. The west side of the street is mostly sliced off by 35E, which runs parallel, set into a trench.

It’s not as if Main Street had some glorious past as a primary thoroughfare. This wasn’t the case, even in its heyday. Who knows how it got the name? Maybe the same aspirational impulse that prompts the founders of small towns to give their settlements names like London, Cambridge, Stockholm and New Prague. Known as Fort Street until 1906, it was home to the sorts of mixed commercial, residential and industrial spaces that sprout up on the peripheries of downtowns. These are also the sorts of marginal areas that are first to be cut into by city planners when big plans are put into motion. Main Street was curtailed in the early 20th century when Seven Corners was realigned, and then further chopped into when the interstates came through 60 years ago.

Despite the short length of the street, I wondered if I would find any sign of the grandiosity the name suggests. I walked through at 5 p.m. on a weekday, expecting, in the fashion of downtown St. Paul, to find the streets deserted.

In fact, the sidewalks were buzzing with activity. Dozens of people were out and about, walking around and clustered in pockets of conversation. There are really only a few buildings still operating on Main Street, and the activity on the street was made up of the men and women from two of those. One is Catholic Charities, at Main and 6th, in a stately 1909 building that once housed a Christian organization called the Junior Pioneer Association. The other is Listening House, a shelter and community center located on 9th Street, offering health care, hygiene and professional services.

Both organizations serve the homeless. In fact, the Listening House opens its doors in the evening at 5:30, so when I walked through the first time, there was a line of people stretching around the block, waiting to get in. When I walked back, the line had vanished into the building.

The Catholic Charities building is quite beautiful, in a functional, unassuming way. It seems surprising, given the fate of most of the other buildings in this part of the city, that it remains standing. Some incredible details remain – look at these tiny iron angels lining the top of one of the side doors. MinnPost photo by Andy Sturdevant
Angels adorn a side door at the Catholic Charities building.

Main Street is also named William Mahoney Street, as a few honorary signs point out. I’d presumed Mahoney was a clergyman, but no, he was actually a mayor (which, given the historic interplay of Catholicism and political power in St. Paul, isn’t too far off). Mahoney was born in Chicago, and was mayor from 1932 to 1934, one in a long line of Irish-American St. Paul politicians. Immediately prior to that, had been the editor of the Minnesota Union Advocate, a labor newspaper founded in 1897 and still in operation today. Mahoney was also active in both the Public Ownership Party and the Farmer-Labor Party in the early 20th century. Between Mahoney and Dorothy Day, for whom the Catholic Charities day center is named, Main Street probably has the highest concentration of socialist namesakes anywhere outside the Iron Range. MinnPost photo by Andy Sturdevant
The Cathedral of St. Paul can be seen from Main Street, also known as William Mahoney Street.

On the west side of the street, before 35E slices it off, stands the Labor and Professional Centre. Main Street probably gets its second honorary name as a result of Mahoney’s involvement with the Union Advocate, whose offices are still housed in this building. The Centre is a typically dumpy modernist beige brick box – in fact, the most interesting thing about it externally is the use of the word “centre” blazoned in a deadpan brown Helvetica on the exterior, in place of the word “center.” It would almost look Canadian, except for the American-style spelling of “labor” instead of “labour.” It seems like an odd mixed marriage. Why not the “Labor and Professional Center,” or the “Labour and Professional Centre”? Regardless of the unpromising exterior, I decide to peek in, and I am glad I did. In the middle of an unremarkable lobby, under a drop ceiling and George Meany-era felt signboards, is a fragment of an amazing bas relief sculpture, depicting four laborers, with the legend “United We Stand Divided We Fall” in the center. The laborers, all of them shirtless in 1930s-style work pants, sling beams of steel and tools over their shoulders. The worker in the center has a hammer and chisel, and is chipping away at the marble, seeming to create the very sculpture he inhabits around him.

MinnPost photo by Andy Sturdevant
This looks the work of a semi-professional and not a seasoned craftsman, maybe a union member moonlighting as a sculptor.

Where did it come from? There are no didactics or legends that give any indication – it’s simply hung on the wall across from the elevators. It looks like it’s probably from the 1930s. It’s reminiscent of one of my favorite pieces of public art in the city, the Art Deco bas relief outside the old Farmers and Mechanics Savings Bank building in downtown Minneapolis, now home to the Westin Hotel. This sculpture, probably from about the same time, is much cruder and perhaps more charming than that one. It’s an accomplished work, but the bodies are somewhat naïve in form, and the whole piece has a slightly outsider-ish quality to them. It looks like it could be the work of a semi-professional and not a seasoned craftsman, maybe a union member moonlighting as a sculptor. Perhaps he’s included a self-portrait of himself in the center, sculpting away. Maybe some of the older union members in the building know something about the piece, but on this afternoon, none of them are around to ask.

It may be the remnant of an earlier building on this site, or another now-vanished labor building. It’s strange to come across such a remarkable sculpture in such an unassuming lobby, tucked away on the edges of downtown. Main Street is misnamed, perhaps, but it’s a reminder of how life on the margins of the city, even when hacked up and hidden from view over the course of decades, still goes on.

This article has been corrected to correctly identify downtown St. Paul’s numbered streets, as well as the street’s historic first name: Fort Street, not Fort Road.