At some point in the late 20th century, for reasons I’ve never seen fully explained, the world of the bus stop bench advertisement was ceded fully to the real estate agent. Billboards, bus stop shelters, Metro Transit buses themselves, every other kind of outdoor advertisement — you’ll find them all decorated with the earnest and hopeful public faces of various local businesses, causes and services hoping for your patronage or support. But aside from the occasional insurance man or carpet cleaner, in many neighborhoods, nearly every bench at every bus stop is decorated with the smiling face of a real estate agent hoping to whisk you away into your new home.

It’s not a medium that encourages wild-eyed creative risks, for the most part. A few days ago, I walked down Hennepin and then Lyndale from Lake to Franklin to look at every single one, about 15 or 20 in all. A few days later, I can’t really remember the details of most of them. There were just too many of them to keep them straight.

But the more you see, the more certain subtle patterns begin to emerge, and the more you understand there is an art to putting these ads together. A bus bench ad has only a few seconds to make an impression, and for someone in real estate, it’s got to perfectly strike a difficult balance: It has to convey authority, gravitas and competence in no uncertain terms, but also convey a sense of personality and affability. No one’s going to call a frowny-faced real estate agent no matter how nice their suit is, but neither are they going to hire some goofball in a plaid sports jacket giving a thumbs-up — this isn’t used cars or personal injury law. You have to have dignity.

You also need to be the slightest bit inspirational, suggesting a new and better life for your potential client, with maybe a touch of luxury, but not coming off as sleazy or underhanded about it. Especially after the housing crash: 2013 isn’t the time to be making extravagant promises to prospective homebuyers. You’ve got to seem knowledgeable but not too slick.

Not only that, but you’ve also got to stand out from dozens and dozens of competitors with very similar-looking advertisements.

That second-person “you” is the trickiest part of all, in some ways. As a real estate agent, you’re not selling the faceless services of a firm or a company. You’re selling you. You, the person that answers the phone at the beginning, signs the agreement at the end and handles everything else in-between.

This leads to the first and most important question: Do you put your face on the ad or not? Many do. I suppose a real estate agent needs to be a fairly outgoing person, comfortable with profoundly personal interactions, but I wonder if many of them take a good, long pause before sending their headshot off to the designer. I can’t think of a lot more alarming than having your face right out there in the open, exposed to the elements and punk kids with Sharpies and funny ideas about mustaches. That takes some courage.

The reason I chose to walk around “the Lakes” (a term almost no one but real estate agents use in daily life) and “the Wedge” (another favorite term that does have some real-life application) is because it’s the site of the greatest real estate advertisement in recent history. That would be Cotty Lowry, whose smiling, bespectacled face on the side of the Burch Pharmacy on Hennepin and Franklin was enhanced and augmented by neighborhood graffitists for years. Though not on a bus bench, it was the quintessential local landmark – every few months, a new one went up, and soon it’d be covered with mustaches, black eyes, missing teeth, sunglasses, face tattoos, and speech bubbles indicating all manner of thoughts (“DO YOU ROCK AS I DO?”).

Lowry not only didn’t mind, but was canny enough to know it was good for business. It solved this essential paradox ingenuously: wacky sells, but real estate agents can’t be wacky. Basically, Lowry outsourced the wackiness, and he was handsomely rewarded with steady business, a fine reputation and a great deal of local notoriety (in 2000, City Pages rightfully honored the sign as the Twin Cities’ “best chronic vandalism,” preserving forever the classic “DO YOU ROCK” line). The fact that it’s now gone, replaced with a tasteful new non-real estate billboard at the refurbished Burch Steak, is a sobering testament to the tastefulization of a neighborhood the Replacements once called home. Lowry’s face is gone from the scene for the moment, and few of his peers have attracted the same attention. But there are a few lessons to learn. On Hennepin, we find Ellyn Wolfenson and Cindy Shapiro taking the super-professional angle. They’re both wearing dark suits and, pleasant smiles aside, look like pretty serious people. Shapiro’s white-collared suit in particular looks almost ecclesiastical. They make note of their “Integrity and Dedicated Professionalism,” but the photos already say that, loud and clear. Their peers Susan and Annie take the opposite approach. They also smile, but they’re standing in a garden, in front of a wall of flowers wearing casual pastel baseball hats. It looks like an iPhone photo you might find on your favorite aunt’s Facebook wall. In fact, no last names needed: just Susan and Annie. Both of these two-person teams have gambled on their portraits making their point for them. Wolfenson and Shapiro are guessing you’re looking for friendly but mostly no-nonsense dark-suited professionals that are ready to get down to business, and Susan and Annie are banking on you wanting personable first-name-basis folks that you might run into at the co-op on a Sunday afternoon. MinnPost photo by Andy Sturdevant
Kevinn Tam falls somewhere in the middle of the spectrum.

Others along Hennepin and Lyndale fall somewhere in the middle of this spectrum: Becky Scadden (arms crossed but grinning warmly) and Kevinn Tam (suit jacket but no tie). Poor Manny Duerson, backed by the full force of the Minneapolis skyline as seen from Lake Calhoun, gets a face full of marker and decals. Graham Smith asks the question “How do you sell in the Wedge?” and partially answers it with his website domain, Ask Graham. He seems to have graffiti-proofed his face with a bold visual maneuver, perhaps inspired by the pop-art holdings across the street at the Walker. Graham’s smiling face appears repeated five times, as if screenprinted in the garish style of Warhol’s late-period celebrity portraits. 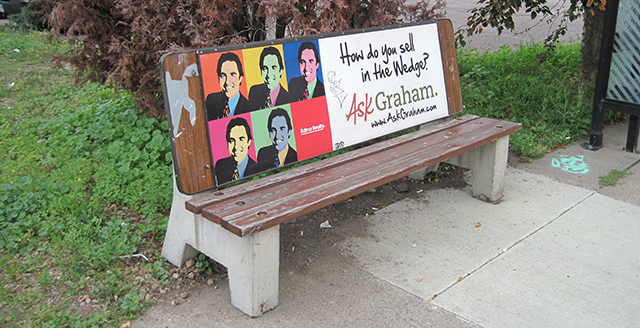 Electing not to put your face on the bench, you win a degree of privacy, but you’ve got a much more limited palette to work with. Faceless ads become more about the slogans. There are two default settings for the typography that’s used to express these slogans: one I will call “Modern Sans Serif Classy” (usually white on black or blue) and the other I will call “Elegant Wedding Invitation Serif Classy” (usually a little busier with golds, off-whites, and softer colors). For example, in the former category, you can “gain from experience” with Bruce Erickson and Charlie Elowson, or go with “the Minneapolis Lakes Area sales leader” Birkeland and Burnet, and you’re getting a pretty similar experience, at least from a typographical perspective. You’re getting minimalist, modernist cool colors, no serifs, no drama. I guess it’s sort of the visual equivalent of a very clean, chic granite top kitchen counter with a window view of Lake of the Isles.

Dean Eichaker, also utilizing a not-fussy sans-serif, probably wins the day in terms of sloganeering: “Change = Growth,” with additional assertions of “Superior Technology * Innovative Marketing * Industry Leader.” Compare that to some of the other sloganeering, most of which is similarly oriented to initiating life changes, such as “Start packing …” and “When do you want to move?”

Eichaker’s slogan is a welcome bit of abstraction and brazenness. It’s less like a real estate slogan and more like something out of the Human Potential Movement. Coupled with the claim to “superior technology,” it’s also much more aggressive than most of its counterparts. Of all the bench ads I saw, it’s the one I recall the most. Not because it’s necessarily the best designed or nicest-looking, but because it was the most memorable slogan. I walked on down Hennepin, eating an ice cream from Sebastian Joe’s and thinking about change and growth and superior technology.

Until Lowry’s face returns, Mighty Quinn-like, to the billboards and bus benches of the Cities, it’s a field that remains very open to innovation. On my way back on Hennepin, I walked over the Greenway between 28th and Lake, and there I saw a billboard of a grinning fellow dressed in denim with a cowboy hat and a guitar. He wasn’t offering to play me “He Stopped Loving Her Today,” though. Instead, he was offering to replace my windows: yes indeed, it was Window World’s Terry Derosier, who has quietly assumed the mantle of the Twin Cities’ greatest billboard hero in recent years. The country-western singer-songwriter motif is somewhat baffling, but that’s exactly what makes it work. Take notes, real estate agents. Do you rock as he does?