In preparing for a show I’m working on at the Minneapolis Institute of Arts this fall, I’ve been reading a lot about alleys in Minneapolis. My focus has mostly been on the alleys outside the downtown core in the residential parts of the city – the north-to-south alleys where many of you readers in Minneapolis keep your garages and garbage cans. The further back you go in history, though, back to the late 19th century, the less you find references in contemporary materials to these sleepy residential alleyways. Mostly, you find references to the alleys of downtown. This is a feature of the downtown landscape that has almost vanished. In fact, they were mostly gone by 1910.

They’re part of that body of folklore people refer to as “the old Minneapolis.” However, when I say “the old Minneapolis,” what specific buildings come to mind? The Flour and Grain Exchanges? Dayton’s? City Hall? The Soo Line Building? Old though they are, they’re also relative latecomers (completed 1893, 1902, 1902, 1906, and 1914, respectively). All were part of a large-scale turn-of-the-century redevelopment that filled out entire city blocks and displaced smaller, more modest buildings. There was a another, older “old Minneapolis” that had been humming along for decades before “the old Minneapolis” we think of today showed up. The downtown of those days was a jumble of slums, storefronts, saloons, apartment buildings, stables, single-family houses, and business offices all tossed atop one another.

Behind and between all of them were alleys. Newspaper accounts of the late 19th and early 20th century are full of colorful references to then-famous alleys – Lockup Alley, Jumbo Alley, Fish Alley, even a Pop Alley (more on that one shortly).

Compared to the high-rises that came later, most of the buildings that fronted these alleys were rickety little things – take a look at a map from the 1880s, and you can see how many structures were built onto a single city block. In between many of them are alleyways, places where you can enter from the middle of the block and cross to the other side. 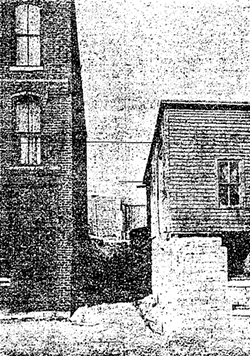 An illustration of an alley from the Tribune

At your own peril, of course. Newspapers from this time are full of lurid tales of poor bumpkins fresh off the farm taking a shortcut through an alley, only to be jumped by hoodlums, beaten up, and awaking hours later to find themselves relieved of $10. Alleys are synonymous with crime, for the most part – if it’s not a random mugging, it’s a fight or a gambling ring or what was often referred to as “beer carnivals.”

It’s difficult to walk around places that don’t exist anymore trying to imagine what it’d be like if they did, though if there were any place one might perfect this art, it would be downtown Minneapolis. This was probably a losing proposition to begin with, but I decided to head downtown and try to find remnants of four of these alleys – Lockup, Jumbo, Fish and Pop.

All four were located along Washington Avenue, then the city’s Main Street. I’m not spoiling anything by telling you they’re all gone, completely and totally. Not only are they gone, but most of the buildings that replaced them are gone, too.

I always feel such a sense of yearning when I walk over a surface parking lot downtown and think about everything underneath it all. It’s almost a sense of sorrow, which I realize is crazy, since these things have been gone since before my grandparents’ time. But I can’t help feeling sad. Minneapolis can seem like such a painfully lost city sometimes. 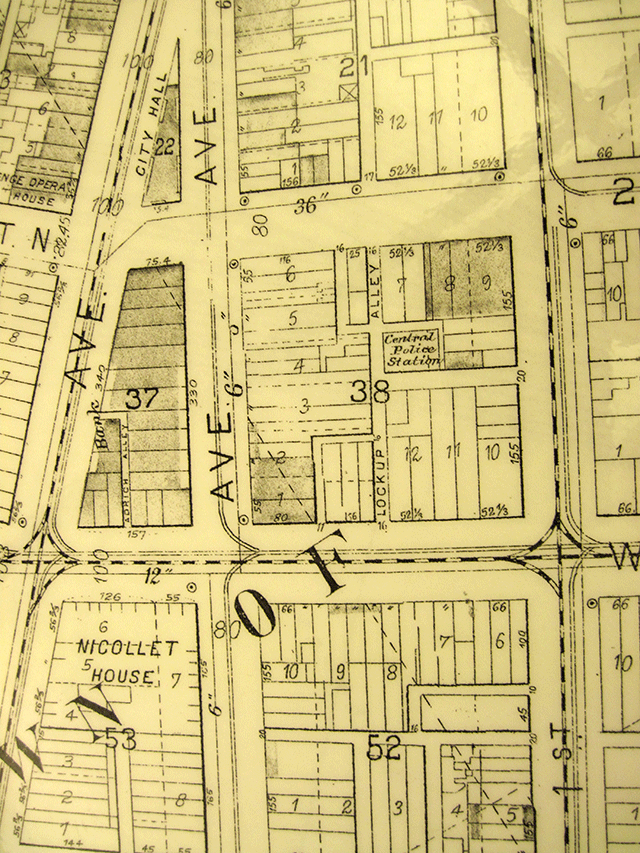 Lockup Alley, of all of its peers, probably garnered the most references. Between 1867 and 1922, the Minneapolis Tribune mentioned Lockup Alley well over a hundred times, and the name actually appears on maps of the time. It was located where the ING Building is now, running north to south between Nicollet and Marquette north of Washington. The origin of its name isn’t hard to guess: It was the alley behind the central police station, near the first city hall. Even back in 1881, people were saying a “cleanup was badly needed” in the alley. The close proximity of the central police station didn’t seem to be much of a deterrent to crime: Lockup Alley mostly turned up in reference to arson attempts, stabbings, drunkenness, runaway horses, fights, robberies, police chases, and a presumably memorable evening in November 1901 in which “Sgt. Sam Olson’s revolver went off accidentally,” the resulting “explosion [setting] his pocket afire.”

Here’s the south entry to where Lockup Alley would have been today, halfway between Nicollet and Marquette. 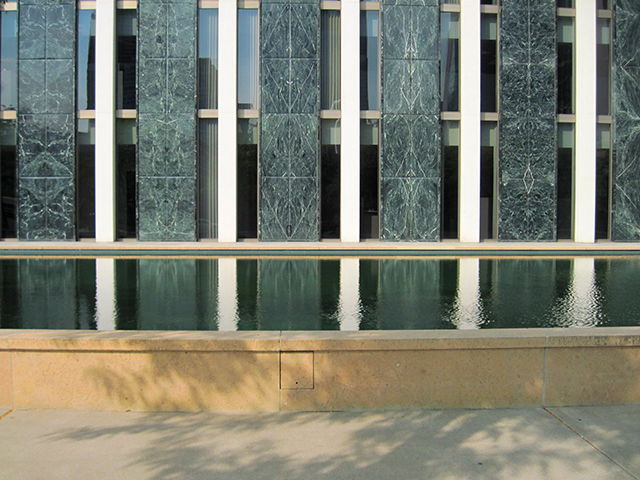 Jumbo Alley was not far, located between 2nd and 3rd Ave S., on the north side of Washington. Jumbo Alley was named for the saloon it sat behind, an African-American-owned establishment that seems to have catered to a fairly integrated crowd (apparently, the alley was home to some of Minneapolis’ first Japanese-American citizens). The whole block was razed in 1912 to make way for the Federal Building, which still stands on the site today. This was right in the middle of the city’s red light district, an officially tolerated collection of saloons, gambling parlors, and brothels whose history was recounted in Penny A. Petersen’s recent book, “Minneapolis Madams.” Reading contemporary accounts, Jumbo Alley seems like it might have been pretty rough – there are accounts of shootings, fights and robberies, and in 1903, neighbors were moved to built a fence around to block it from view – until you consider there’s actually only a handful of references to crimes committed there over the course of about 15 years. A little rowdy and probably a little sleazy, and though it’s impossible to know, it actually sounds like kind of a fun place. A little bit of the old Barbary Coast, perhaps. 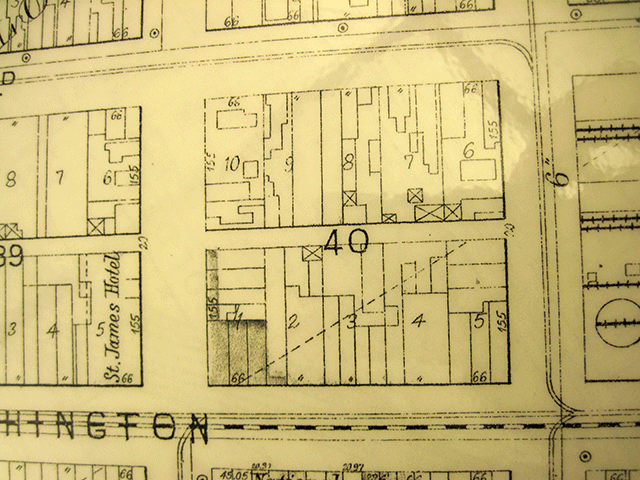 Besides Lockup Alley, Fish Alley was perhaps the city’s best-known alley. Mostly a memory by the 1910s, the name was invoked by Minneapolitans of the time in the same way they invoke Block E today – a dangerous, dirty, lowdown place that everyone seems to have loved anyway. 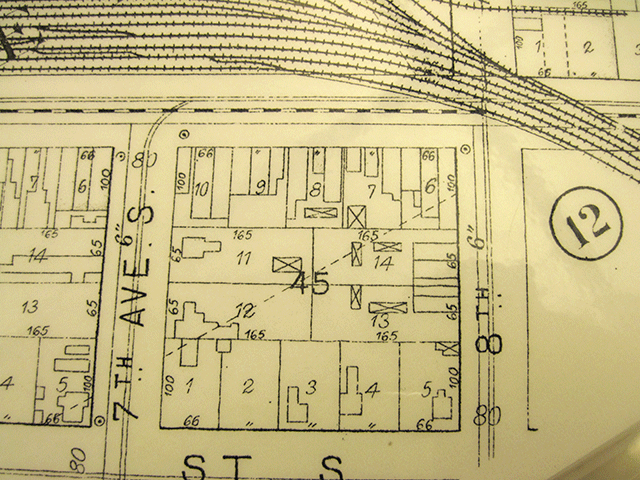 Named for the fishmonger that used to sell his wares (and discard his smelly scraps) nearby, Fish Alley was described as “nothing more than a court, or ‘blind’ alley surrounded by numerous small structures,” located on Block 45 between what is now Park and Chicago, on the south side of Washington where the Old Spaghetti Factory now stands. People would enter through a four-foot alley between two buildings on Washington, and find themselves in “the slum of all slums,” a ramshackle collection of flophouses, shanties, saloons and performance halls. It’s easy to feel nostalgic for these old, long-gone bits of vernacular architecture, and wonder what they might have looked like today, clustered together. But that’s probably impossible. They were rickety wooden structures, not really built for the ages. The stately brick and mortar skyscrapers that replaced them were. 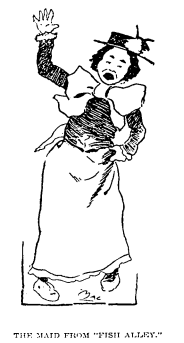 An illustration of “The Maid of Fish
Alley” from the Tribune

The sense of nostalgia – however misplaced – isn’t just me, though. The last reference to Fish Alley in the Tribune is in 1906, as “the abode of criminal classes of years ago,” a place where “old-timers on the force find their memories stirred as they see the haunts of vice cleared away.” Even then, all those years ago, the writer strikes an elegiac tone: “The races mingle in the most cosmopolitan habits, the black, the white, the yellow and admixtures of all these colors.”

He continues: “The dances held there will never be equalled [sic], it is said, by those who know. Women and men of all kinds and colors participated in the fun. Liquor flowed like water, and fights were as common as flies in the summer-time. Some of the most exciting functions in the history of Minneapolis were held there.” Even a police officer seems overcome with mournfulness: “Pretty soon … I will have nothing to do but look up at wholesome buildings.” (OK, he may have been being sarcastic.)

There is a sort of alley left on the block. Behind the Old Spaghetti Factory is an employee parking lot and some loading docks which, like Fish Alley, open on Park (then known as 7th). There’s not even a single stone on the pavement that remains from the old Fish Alley, but the light comes in through the buildings and hits the ground as it might have 125 years ago. And there is one interesting sight: a street artist has spray-painted a version of one of New York artist Robert Longo’s “Men in the Cities” drawings on the side of a loading dock. It’s a black-clad figure in a new wave suit, lurching in a sort of spastic, disorderly dance. It seems to unknowingly capture the disorderly goings-on of the old Fish Alley.

Pop Alley was at Washington and Minnetonka (later 1st Ave. S., now Marquette). Unfortunately, this wonderfully named alley merited only one solitary reference in annals of the Tribune, way back in 1872. Judging by the tone of the article, though, it seems to have been an accepted nickname for at least a few years. I can’t possibly recount the story as well as the breathless, long-dead Tribune reporter does here, so I will turn my column over to him to tell you the tale of “an alley that has for reasons given below, received the name of Pop Alley”:

“Mr. H. Martin, who is a manufacturer of the thin but palatable drink called pop, occupies a building which runs back to this alley, and here the bottles used in the business are cleaned, filled and packed. Hundreds of barrels of water are used in the cleaning process, for [Martin] will allow no filth around his establishment, and this is thrown into the alley and finds its way down into Second street, where it accumulates in the gutter. There being no outlet for this constantly streaming flow of pop and water a portion of it soaks into the earth, and there’s the rub. The brick floor of the open court between the sidewalk and basement of the Kelly Block is covered to the depth of several inches with diluted and very stale pop, which nuisance cannot be abated as long as the pop stream continues to flow down Pop Alley.”

And that’s the story of Pop Alley. The sensible thing to do here, on the conclusion of my tour, seemed to be pour the remaining contents of the Coca-Cola I’d been carrying around all afternoon onto the sidewalk of old Pop Alley, and let the stale pop run into the storm sewer on Second Street. That’s exactly what I did. 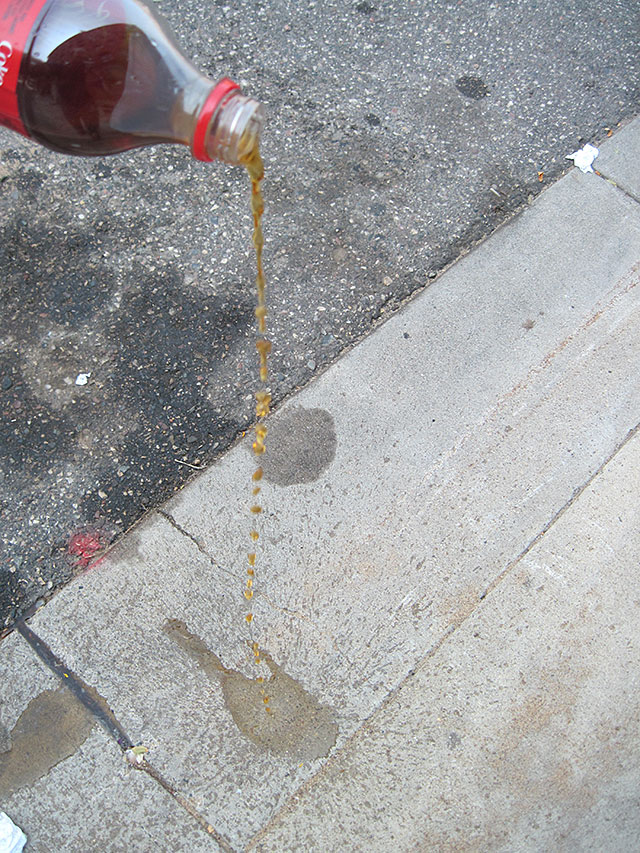