Where are all the Minneapolis mayoral yard signs this year? That’s what I thought about walking around Northeast this week, looking for things to write about.

For a mayoral race with 35 candidates to choose from, you sure don’t seem to see a lot of them in the shop windows and front yards of the city. Or I haven’t, anyway. In the vicinity of 13th Ave. and University, I saw but one lonely yard sign for Mark Andrew.

From the streets, it looks like the real passion among the electorate is in the City Council races around Minneapolis. In Northeast (and in every neighborhood I pass through), the City Council yard signs seem to outnumber their mayoral counterparts 10 to one. You can pass block after block and see dozens of signs for Diane Hofstede or Ty Moore or Abdi Warsame, and not see a single sign for Andrew, Betsy Hodges, or Don Samuels, or any of the other mayoral hopefuls. Maybe everyone has heard the phrase “weak mayor system” often enough to figure it doesn’t matter. Maybe people are too overwhelmed by all the choices. Maybe everyone just misses R.T. pre-emptively.

Whatever their reasons, I’m sad there’s not the usual Election Year clusters of mayoral yard signs. Looking at yard signs for the citywide and statewide races is one of my favorite ways to take the temperature of contemporary preferences in political design. Election seasons are always interesting to me in the way a city’s physical landscape becomes blanketed in exhortative slogans and bold, eye-grabbing red and blue signage. In fact, the landscape is transformed, and not always in an attractive way. What makes for good political decoration? What makes for bad? This week, in order to find out we’ll take a closer look at the mayoral yard signs placed across the city of Minneapolis, even if it is sparser than usual.

The most exciting part of this current era in mainstream political design – and I use the word “exciting” advisedly – is realizing how fresh it all really is. Think what you want about Barack Obama and his call for change, but one change his 2008 campaign made that you can’t deny was the way it revolutioned how American political ephemera looks and functions. Nearly every piece of Democratic Party-affiliated political design since 2008 is indebted to the Obama sensibility (largely the vision of his campaign designer, Scott Thomas). The cool, retro typefaces. The muted blue palettes and red and white highlights. The minimal, uncluttered quality of all of it. It’s shocking to think what a sea change that was. Do you remember how terrible campaign materials looked before 2008? Like John Kerry’s logo in 2004? That one was so incompetent and crappy that it looked like some guy named “Kerry Edwards” was running for comptroller and had his art-school-dropout nephew design it using Microsoft Paint and clip art stolen from Google Image Search. You can almost see the Shutterstock watermark on that American flag.

For the most part, this Obamaist design sensibility has trickled down to statewide and local races. In the mayoral race, most of the yard signs have a consistently yes-we-can visual quality to them. You’ve got a mix of authoritative serif typefaces and sans-serif typefaces, usually in white on a dark background, and few nice retro flourishes in the imagery (ribbons, stars, arrows, nonpartisan geometric shapes) and supporting text (typefaces like Futura, once found only in Wes Anderson movies, are getting a heavy workout). They’re all pretty cool, both in terms of color palette and in terms of the attitude they put across. No screaming flag motifs or italicized Times New Roman or retina-burning fire-engine red backgrounds. Even Mayor Rybak’s famed teal blue “R.T.!” signs from years past would seem a little hokey in comparison today. 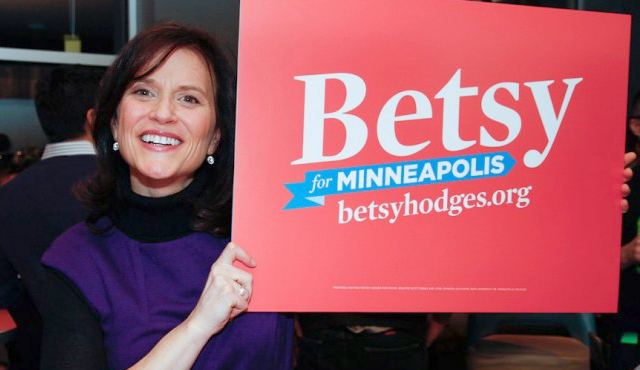 Courtesy of Betsy Hodges for Mayor

City Council member Betsy Hodges’ yard signs are probably the most plainly Obama-like, with her sleek typefaces and minimal design. She’s gone with a blue and orange motif, two complementary colors that, when put side-by-side, create a sense of friction that makes for some visual excitement. From a strictly aesthetic perspective, I’d say Hodges is the best in the race. I’ve always been a big fan of the convention of introducing the candidate by first name only, even if I’m not really sold on that serif-y typeface she’s using. Look at that “t” – it looks weirdly oversimplified. But that said, check out the ribbon-like element under her name, the one bearing the word MINNEAPOLIS, written in that attractive block typeface. Here’s the clincher: the shape of the banner seems to be a subtle reference to the Foshay Tower, obelisk-shaped and pointing the way ahead. If that nod to the Foshay was intentional: nice! If not: pretty good anyway! I’ve never understood why mayoral candidates don’t use more explicit Minneapolis imagery in their campaign materials. I’ll donate 20 bucks to the next candidate who works a microscope and ruler into their campaign logo. 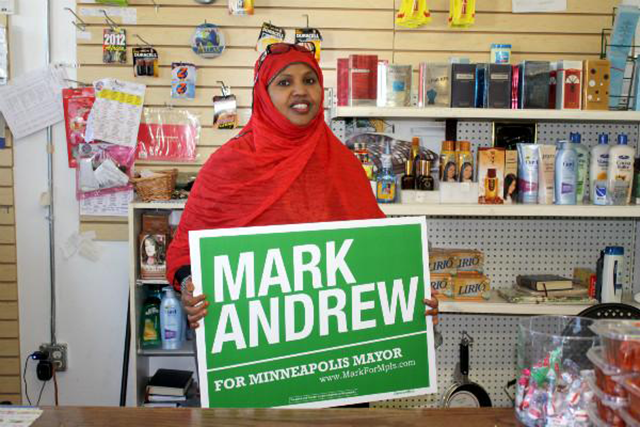 Courtesy of Mark Andrew for Mayor

Each of the major candidates has claimed his or her color on the spectrum. R.T. had teal, Hodges has a lock on orange, and Mark Andrew has thrown his lot in with green. That makes sense – most of the language around his campaign relates to environmental issues. I think overdosing on green can be just as pandering to a certain type of voter as tossing too much red, white, and blue on something can be to another kind. Andrew’s signs doesn’t cross that line, though, and green is a good color for implying a style of easy-going progressivism. The biff-bang-pow sans-serif italics seems a little odd and action movie-ish for a mayoral campaign, but I suppose it shorthands the general concept of “energy” well enough. 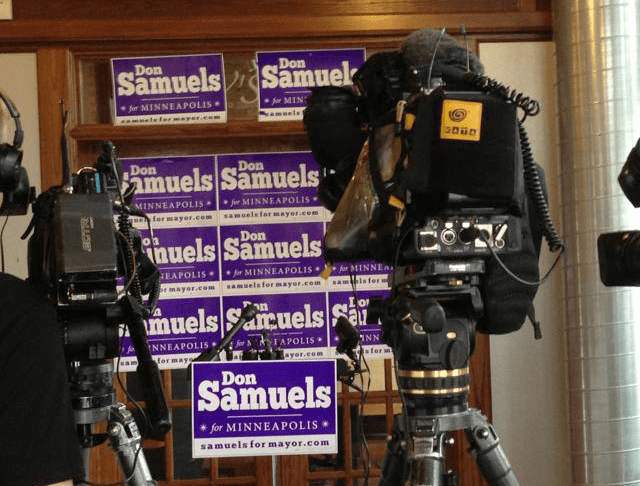 Courtesy of Don Samuels for Mayor

Don Samuels has staked a claim on purple. I’m surprised more candidates don’t use purple. It’s a rich, agreeable color. I like Samuels’ signs; they’re more traditional and less overtly trendy than some of his competitors without looking outdated. His name appears in a resolute and blocky class of typeface called a slab or Egyptian serif, often used in newspaper headlines and display signage. It’s authoritative, but it’s also warm. I’m not entirely sure about the two asterisks he’s got flanking the “for Minneapolis” part, but they’re a good substitute for standard five-pointed stars. 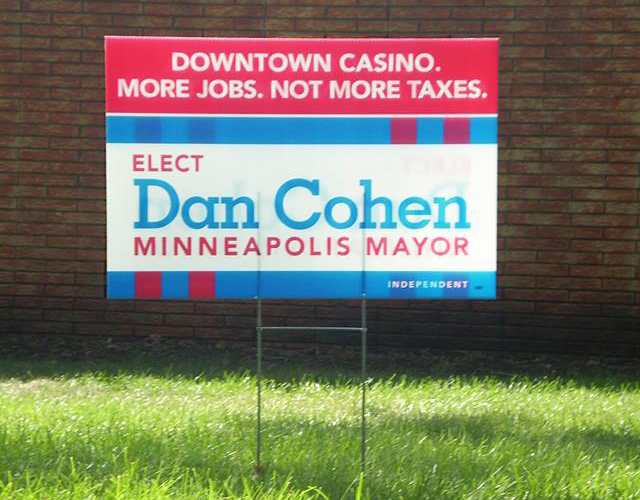 Courtesy of Dan Cohen for Mayor

Dan Cohen’s signs also have a third-hand Obama-ish look, with a mix of blocky, white-on-blue serifs and sans serifs, and a color scheme that mingles red and blue (presumably a nod to his status as an “independent” bipartisan candidate). The signs depart from Obama-like subtlety, however, when it spells out Cohen’s mayoral priorities pretty clearly at the top: “DOWNTOWN CASINO.” You probably know that Cohen ran for mayor in 1969, and I wonder what his campaign material looked like then. I couldn’t find any examples online or in the Minnesota Historical Society’s online holdings, but I’ll wager they looked great, or better than this, anyway. That’s my favorite era in political memorabilia, from Eugene McCarthy’s first campaign through Jimmy Carter’s last, the one era where everything looks modern and clean and fun and a little self-aware. There’s Helveticas and Microgrammas, and deadpan periods after names (“NIXON.”), and other names written self-effacingly in all lowercase (“mcgovern”). I think it might be hip if Cohen had a crate of ’69-era yard signs in storage somewhere, and brought them back into circulation for a bit. He might rack up some second and third IRV votes from retro-obsessed youth in Northeast and Uptown. They probably don’t say anything about casinos, at least. 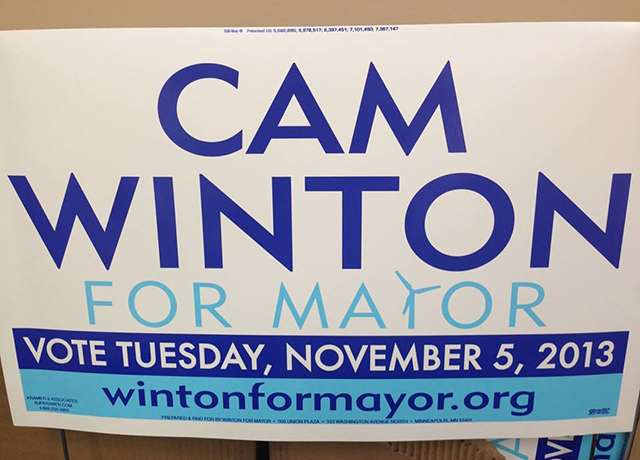 Courtesy of Cam Winton for Mayor

Yard signs for the other major candidates aren’t worth going into too much detail. Jackie Cherryhomes’ signage involves a boring red background with her name in Impact, a typeface only moderately less schlocky than Comic Sans; a pre-Obama design maneuver if there ever was one. Cam Winton uses a strong, modernist sans-serif that also has a very modern, vaguely Wes Andersonian look, and utilizes a silhouette of a wind turbine for the “y” in “mayor.” It’s a memorable touch, though an overly specific one that makes him seem a little bit like a one-issue candidate.

Of course, no roundup of mayoral candidate design issues would be complete without a final word about Mike Gould, the perennial candidate for mayor known to regulars around the University of Minnesota campus for his shirtless proselytizing and impromptu musical performances. Mike Gould’s loopy, bubble-lettered signs, with their trademark backwards-E, are plastered over newspaper boxes and public walls everywhere around campus. They’re a reminder that, whatever trends come and go in mainstream political design, the stuff on the fringes will generally remain the same, year after year, for better or for worse. Gould is not the mayor of Minneapolis, but he is the mayor of gonzo outsider campaign signage. Mike Gould will still be putting up Mike Gould posters long after one of the candidates above has been sworn in as mayor.