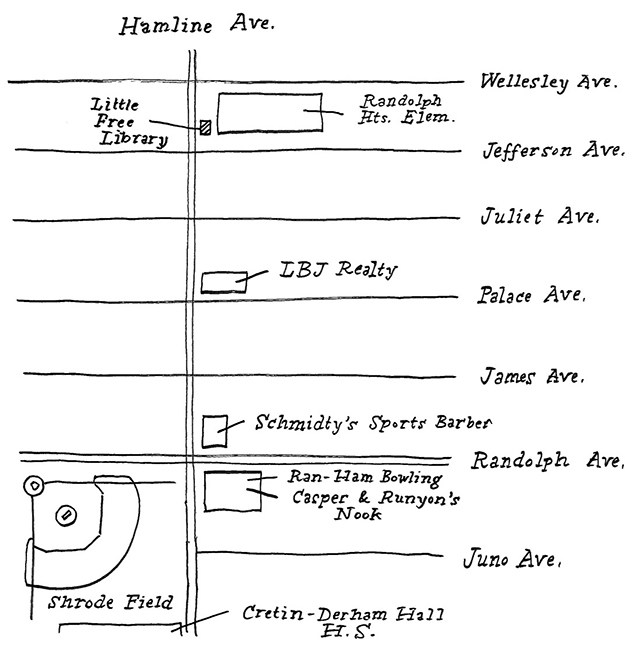 MinnPost illustration by Andy Sturdevant
If it’s not named for someone from the neighborhood, then there are plaques, photos or mementos somewhere nearby commemorating neighborhood people.

Macalester-Groveland and Highland Park are such cozy neighborhoods that whenever I walk through them, I am always sure someone’s going to walk up to me and say, “Hey, what are you doing here? You don’t live here.” Not because they’re unfriendly or exclusive neighborhoods – they’re not at all – but both are so lived-in and seem so familiar and close-knit to the residents that they could spot a nonresident a half-block away.

That close-knit familiarity is evident in how well annotated the area is. You can walk a few blocks down Hamline Avenue, starting up around St. Clair and down to Randolph (which divides the two neighborhoods), and so many of the buildings, streets, and businesses you will encounter are named for someone from the area. If it’s not named for someone from the neighborhood, then there are plaques, photos or mementos somewhere nearby commemorating neighborhood people.

Take the streets, for example. Juliet Avenue, just off Hamline, is named for a neighborhood girl. The “Juliet” in question is Julia Nettleton, the daughter of two dairy farmers who owned land around Randolph, back when it was possible to have a dairy farm within St. Paul’s city limits. Julia was just the first of an unbroken lineage of neighborhood kids to be so honored.

Like many residential parts of the city, the Randolph-Hamline area shuts down early – by the time I arrived, the Copper Dome and Schmidty’s Sports Barber had closed for the evening. But a peek through the window at Schmidty’s reveals walls full of signed photos and memorabilia from neighborhood residents, past and present. Included is the framed jersey of one local son in particular whose legacy looms large over the Randolph-Hamline area: Joseph P. Mauer, Cretin-Derham Hall High School Class of ’01 alumnus and current Minnesota Twin. A quick tally of Maueriana in the neighborhood: Besides the framed jersey in the barber shop, there are some errant photos on the wall of Caspar and Runyon’s Nook restaurant nearby, as well as a two-burger special on the menu called the Joe Mauer Hits a Double, as well as a note that the Lodge Burger (bacon, tomato, smoked cheddar, chipotle mayo) is “Joe Mauer’s favorite!” Joe Mauer’s name is also prominent on the purple and gold scoreboard at Cretin-Derham Halls’s Shrode Field, noting his 2009 American League MVP. Also mentioned: Paul Molitor, Class of ’74 and 2004 Baseball Hall of Fame inductee. Mauer is so present in the neighborhood that, when I sat down in the basement of the Nook for dinner, the guys at the table next to me were talking about him in tones that suggested they knew him personally. Or at least they had gone to high school with him right across the street. They kept mentioning “Joe,” no last name needed.

The Nook itself – as well as the Ran-Ham Bowling Center downstairs, acquired by the restaurant a few years ago – is virtually a neighborhood museum. St. Paul is full of great neighborhood bars, but I can’t think of any that serve their purpose as well as the Nook. Everything in the bar is rigorously designed to serve two interrelated functions: 1) make you feel like you belong there, or 2) make you feel like you should belong there if you fail the first function. Already noted are the framed and signed photos and posters on the wall of the usual sports heroes and civic functionaries around the Nook. But it goes deeper, much deeper than just about any bar I can think of – there’s a “hall of shame” of high school yearbook photos of regulars, and constellations of notated dollars bills stuck to the ceiling and walls of the basement extension. Hell, even the name of the place, Caspar & Runyon’s Nook, refers to two more neighborhood boys made good, the guys who bought the bar and continue to operate it. MinnPost photo by Andy Sturdevant
Constellations of notated dollar bills adorn the ceiling and walls of the basement extension of the Nook.

This may say more about me than the neighborhood specifically, but whenever I eat at the Nook or wander around Hamline and Randolph, I begin thinking to myself, “You know, maybe I should buy one of these little stucco houses on Wellesley or Palace, marry a nice Holy Spirit or Nativity of Our Lord girl, join a bowling league, have three or four kids, and bring them to the Nook for supper every weekend.” And I’m not even Catholic! MinnPost photo by Andy Sturdevant
Further up Hamline is a gem of a school building, the
Randolph Heights Elementary School.

A little further up Hamline is a gem of a school building, the Randolph Heights Elementary School. It’s a picturesque little school building (complete with a Little Free Library outside, courtesy the Randolph Heights Discovery Club) made most notable by the frieze over the front entrance. “Take fast hold of instruction,” it reads, “for she is thy life.” It’s a quotation from the Biblical book of Proverbs, and it’s flanked by two students. The male student is reading while the female student has been relegated to knitting, but that outdated instance of gender roles aside, it’s a nice sentiment. Moreover, it’s a sentiment embodied by the Discovery Club’s sturdy and attractive Little Free Library – they’ve clearly taken fast hold of instruction. (And of course, in the spirit of the neighborhood, the names of all of the members of the club are written inside the door.)

Lastly, at 420 Hamline Ave. at Palace Avenne is one of my favorite artifacts in St. Paul, and one that probably won’t be around much longer. It also pays a sort of tribute to a famous personality, though one who isn’t from the neighborhood. In all-caps plastic red letters, the front reads LBJ REALTY. I’ve been curious about this space for a while – why was it named LBJ? After President Johnson? Or did “LBJ” just happen to be the initials of the real estate broker, and they used this fact to their advantage? Is it just a reflection of a time when LBJ was one of the most popular figures in American life? The offices are now empty, the phone number’s disconnected, and there’s a for-sale sign outside, so I’m not sure these questions can be answered – unless you live in the neighborhood and know the story yourself, in which case I’d love for you to leave the story in the comments section. These personal histories of a neighborhood and the people within it are what make a neighborhood like Randolph and Hamline so enjoyable to walk through. There’s a story behind every place you encounter, anywhere in the world. Some neighborhoods just do an exceptionally good job at putting those stories out in the open.

MinnPost photo by Andy Sturdevant
Why was it named LBJ? After President Johnson?

Programming note: I’ll be taking all of October off to finish a few projects that have been a long time in the making.

On October 3, my first book, “Potluck Supper With Meeting to Follow,” will be released by Coffee House Press. It’s a collection of essays and drawings, and contains a number of pieces that first appeared in this column (expanded and reworked, in many cases). You can buy it from the local bookseller of your choice. My major public reading will be Nov. 4 at the Rum River Library in Anoka as part of the Hennepin County Library’s Club Book series.

On October 17, a show I’ve been working on at the Minneapolis Institute of Art opens. “Alley Atlas” is a project that will give an unofficial name to every Minneapolis alley, as chosen by its residents. If you live on an alley in Minneapolis, consult your neighbors and submit your name here. I’ve been working with a design studio to create wall-sized maps of the city’s alleys for the galleries, so you’ll also be able to come find your alley in person. More information about “Alley Atlas” is here.

The good news is The Stroll will continue in my absence this month. Over the next four weeks, you’ll see guest columns from Wahida Omar, Natalie Vestin, Bill Lindeke, and T.D. Mischke. All four are excellent writers with a great eye for the urban landscape, so you’ll be in good hands. Thanks for reading the column, and I hope to see you around next month.

From street signs to framed jerseys: Hamline-Randolph area is one annotated neighborhood