In June 1868, Civil War hero, Army surgeon, and one-term Rep. A.A. “Doc” Ames — who would later become one of the most corrupt mayors in Minneapolis history — relocated from Minnesota to Northern California to try his hand in the newspaper business. In his first month in town, he sent the following dispatch back to the Minneapolis Tribune, breathlessly recounting his early impressions of the city of San Francisco: “… It is a magnificent metropolitan — and a wealthy city — having more inviting qualities than any other, reaching out arms of wealth and happiness to all persons, cities, and countries. Her streets are beautiful, churches elegant, hotels splendid, stores large and well-furnished. She has an industrious population — mills, factories, and machine shops in active operation, answering to the great demands of the city and country.”

Most of America shared Doc Ames’ high opinion of San Francisco in the 1850s and ’60s: a beautiful, prosperous, world-class city, growing by leaps and bounds every decade, attracting ambitious, talented strivers from all over the world. In 1854, a few years before Minnesota statehood, a man named William Foster, who’d just migrated from the west and shared this opinion, put his admiration into action. (Foster had an exceptionally interesting life himself before his arrival in Minnesota that’s worth reading about.) He platted a village site very near the rapids on the Minnesota River, in what would later be Carver County, about 30 miles southwest of Minneapolis. Foster must have had big dreams of reaching out arms of wealth and happiness, because he named his village “San Francisco.” San Francisco, almost as hilly in places as its namesake, sat not on a bay but on the banks and bluffs of the Minnesota.

For a while, Foster’s ambitions for San Francisco seemed to be realized. The next year, in 1855, the village had its own post office, and, most critically, was designated the county seat of newly organized Carver County. Alas, this prominent position in the civic life of Carver County was not to be; two other larger villages downriver, Carver and Chaska, were expanding rapidly at this time and overtook San Francisco shortly. The largest of these villages, Chaska, became the county seat in 1856 by popular vote, and in a few years the population had swelled to over 2,000. Over the next few years, Foster’s original San Francisco town site would be abandoned after a series of debilitating spring floods, and reclaimed as farmland for the many tenant farmers in the area. Foster himself left to return to the Bay Area, where he lived the rest of his life. Most references note San Francisco after this time as a “ghost town.” 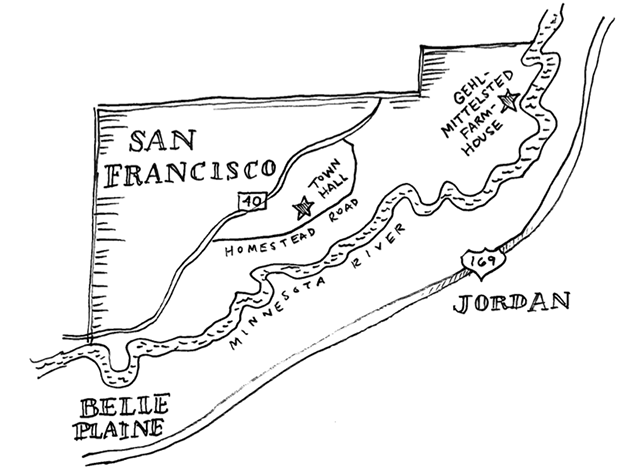 San Francisco is, as far as I can tell, one of the very few ghost towns in the seven county metropolitan area with extant infrastructure, and one of a few in Carver County. Greater Minnesota — especially the Iron Range — is littered with abandoned townships, many with evocative names like Radium, Enterprise, Bodum, and Shell City, and some of them complete with uninhabited structures and decaying main streets. “Ghost town” can be a fraught bit of terminology, and if you drive into San Francisco expecting a Wild West-style ghost town, with swinging doors opening up to abandoned saloons, you will be disappointed. Save one farmhouse, the remains of the original San Francisco and any original structures and roads now seem to be completely gone, absorbed into a farm that sits at Highway 40 and Homestead Road. I spent a lot of a recent Sunday morning driving around, asking around and hoping to locate it, to no avail. MinnPost photo by Andy Sturdevant
San Francisco Township is home to about 900 people and a great deal of farmland.

San Francisco is gone, but San Francisco Township, the community that sprang up around the same area, continues to this day, home to about 900 people and a great deal of farmland. The township sits mostly along a dirt road called Homestead Road that roughly follows the bend of the Minnesota River. Much of San Francisco today is farmland and federally protected parkland. It’s interesting for what parts of San Francisco’s past remain, and what parts are gone.

Gone, along with the post office and any other original structures, is the Swedish Methodist Church and cemetery; there seems to be some confusion about whether the cemetery was ever in use or not, but according to the Weekly Valley Herald, the church was disassembled and moved to the adjacent township of East Union around the turn of the century. East Union, an unincorporated township, is still home to a very stately, 150 year old Swedish Lutheran church and cemetery, and historically had a co-op creamery, a gas station, a feed mill, a grocery store, and other attractions that drew San Franciscans for business and trade. The community of Belle Plaine, nearby, was easily accessible, and beginning in 1895, a ferry crossed the river into Jordan and Scott County. Any aspiring prairie Levi Strausses or Domingo Ghirardellis made their livings in those places, not San Francisco.

What little commercial activity there may have been in town seems to be gone. San Francisco shared one major similarity with its West Coast namesake: Most of the clapboard wooden structures were easily susceptible to fire. Newspaper accounts from the late 19th century are full of references to fires claiming houses, farms and other buildings. The land — beautiful, varied natural features ranging from bluffs and hills to woods and wetlands — was most useful to the people of this part of the county as high-quality farmland.

San Francisco Township is home to at least two very interesting historic structures, located about a half-mile from each other. One is abandoned, one is not. MinnPost photo by Andy Sturdevant
The Gehl-Mittelsted farmhouse was built by a wealthy German butcher well after the end of San Francisco.

Right on the river — so close in fact that the toilets inside the brick outhouse hover right over the water — is the Gehl-Mittelsted farmhouse. It’s boarded up, with a tarp thrown over the roof. Built by a wealthy German butcher well after the end of San Francisco but in the prosperous farming years of the late 19th century (and occupied by the Mittelsted family as recently as 1995), the farmhouse is now located in the Minnesota Valley National Wildlife Refuge. Nearby, there are foundational remains of a stone barn that once housed hundreds of hogs and cows. The Gehl-Mittelsted farmhouse is a beautiful and solid piece of craftsmanship, and tucked away in an impossibly picturesque part of the area. It’s the sort of place you’d imagine a yeoman farmer living in quiet, rustic contentment, looking out over livestock and crops to one side and the river valley to the other. The problem is, the house is itself in a terrible state of disrepair — in 2006 it made the Preservation Alliance of Minnesota’s list of most endangered sites — and there doesn’t seem to be any money locally to undertake the extension renovation it’d require. So it sits in a state of suspended animation, looking out of time, the most ghostly site in this township. MinnPost photo by Andy Sturdevant
The farmhouse is so close to the Minnesota River that the toilets inside the brick outhouse hover right over the water.

On Homestead Road, however, past the farmsteads and midcentury ramblers that line it, San Francisco Town Hall, built as a schoolhouse in 1917, still stands. It’s still used as the town hall and has been since the ’30s, where the board meets to discuss zoning, roads, building permits, and other local matters. It’s made with the sort of pale yellow Chaska brick that made the area famous, with a white cupola and brown tiled roof. Jerry Scott, who has served on the town’s board for 40 years, lives a few doors away. His number was on the township website, so I gave him a call to see if he wanted to talk about San Francisco. Jerry and his wife, Lois, invited me over to their house to talk a bit about the area; both have lived nearby for their entire lives. They tell me about the town, about flooding in the spring and taking the ferry (“it was 10 cents, which was a lot of money,” said Jerry. “I’d just go to Belle Plaine, we could do that for nothing”), about picking fresh strawberries and farming 160 acres. MinnPost photo by Andy Sturdevant
On Homestead Road, however, past the farmsteads and midcentury ramblers that line it, San Francisco Town Hall, built as a schoolhouse in 1917, still stands.

It’s the optimism of the “San Francisco” name that attracted me; it joins the ranks of Minnesota cities and towns like Cambridge, Stockholm, Athens, Hastings, Manchester, New Prague, New Ulm, New London, Rochester, New York Mills, and many others that took their names for other famous, distant cities. But in America, time marches westward, and it seems like a rare thing for a place in the Midwest to bear the name of a Western city, a city that is very nearly one of its contemporaries. Ten years before Foster founded San Francisco, Minn., its western namesake had fewer than a 1,000 residents, a sleepy seaside former Spanish colonial outpost that hadn’t yet made its name; by the time Foster had named his settlement for it, the population had increased tenfold. He undoubtedly hoped his Baghdad by the Bluffs might capture some of that magic. It didn’t, in quite that way, but the name lives on all the same, imparting a strange and wonderful cosmopolitan air to a friendly, quiet farming community.

Thanks to Jerry and Lois Scott for their hospitality, as well as Maidie Felton of the township board and Marlene Magnuson of the Carver County Historical Society for their assistance.

More photos of the Gelb-Mittelsted Farmhouse and San Francisco Town Hall are here.