Minnesota was almost definitely a fine place to live before the Art Shanty Projects first launched in 2004, but I couldn’t personally say for sure if that’s true. I arrived the same year as the first public iteration of the cold-weather outdoor art extravaganza, and I’ve either participated or attended every year since.

My own history in this state is so intrinsically tied to the Art Shanty Projects — my personal history as well as my professional history — that it’s impossible to imagine winter in Minnesota without them. Clearly it’s also impossible for me to approach the topic with any veneer of objectivity, so I’ll dispense with any flimsy pretext of that right now. I love the Art Shanty Projects. I love the creativity and commitment to handicraft you find in the themed shelters out on the frozen lake, built in the style of ice fishing shanties. I love the people who have committed an enormous amount of time and energy into being out there, providing an experience for visitors and for fellow shanty-builders. I think it’s the best of the region: people pitching in to make a big project together, equal parts unlikely and accessible. They’re doing it cheerfully, and doing it well. ASP is happening all month long on White Bear Lake on weekends, and I can’t tell you more emphatically to go experience them for yourself. Especially if you’ve never been.

Sure, it’s cold. Actually, sometimes it’s miserable. This past Sunday, when I went, the wind chill was way, way below zero — I didn’t check to see exactly because I thought remaining ignorant of the facts in this case would be OK — and some people were clearly having a hard time out there. But people were also out, bundled up and gathered together en masse. Kids stuffed into fleece, wool and down were running around everywhere, which is always a sure sign of good health in a living cultural institution. 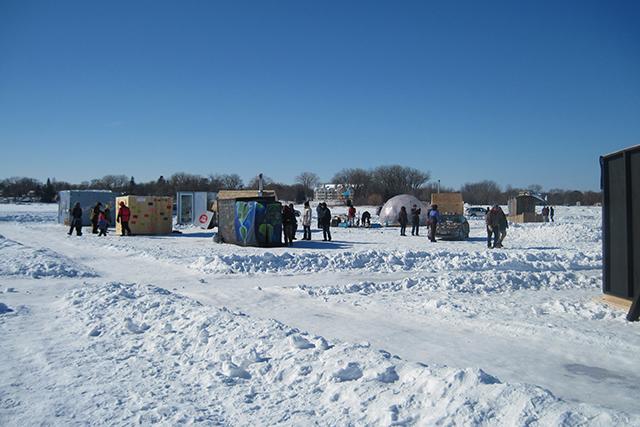 MinnPost photo by Andy Sturdevant
This past Sunday, when I went, the wind chill was way, way down there.

When I say it’s impossible to imagine winter without the project, that’s actually not true, because you don’t have to imagine what it’d be like: You just have to think about last winter. In 2013 there was no Art Shanty Projects, as the event moved to a two-year cycle. Last winter was a particularly nasty one, too, which made the absence all the harder to take. I tried to take up cross-country skiing, but nothing filled the void. To a large extent, for years I’ve relied on the ASP to get me out of my apartment, into the outdoors, and interacting with people in the worst part of winter. It’s a really good way to mark mid- to late winter in that bleak and dull stretch between the Winter Carnival and the May Day Parade (two other oddball local climate-focused celebrations with which the ASP shares some DNA).

This is the first year the Art Shanties have ever been somewhere other than Medicine Lake, out in Plymouth. They’re on White Bear Lake, on the other side of the metro, and it’s odd initially to see the familiar backdrop against another lake. But it’s a wonderful location — driving into White Bear is, at the risk of alienating my west metro readers, a more satisfying experience than going to Plymouth. White Bear — “Beartown,” according to the local signage — is one of those charming little commuter towns like Shakopee or Excelsior that feels like you should be able to get there by train, with a main street lined with small businesses, and older infrastructure and architecture than you find in most suburbs. Like Excelsior, it’s an old resort town, and it still has a leisurely, easygoing feel that compliment the Art Shanty Projects. 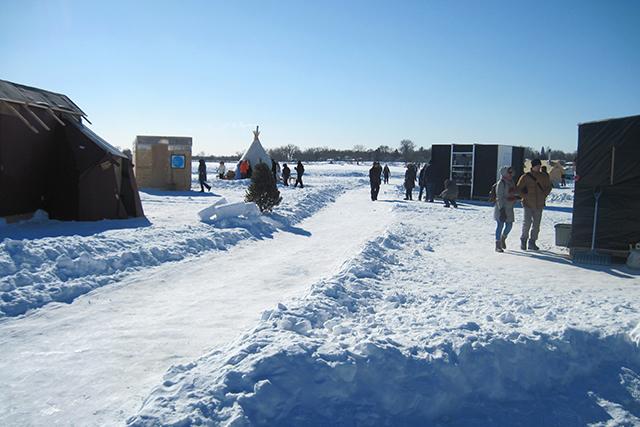 MinnPost photo by Andy Sturdevant
There are more than 20 shanties out on the lake.

There are more than 20 shanties out on the lake, running the gamut thematically from high-concept participatory venues to modest, low-participation structures. I didn’t get a chance to visit all of them, wanting to save some for later trips. But I’ve gone to enough Art Shanty Projects in the past nine years to know what I was looking for. 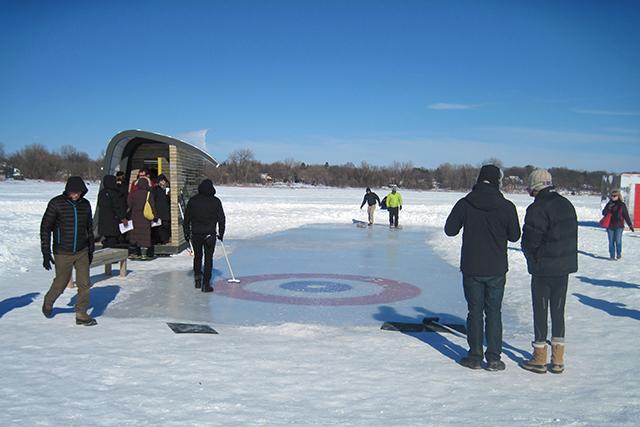 MinnPost photo by Andy Sturdevant
The shanties are venues for participation.

Ice fishing shanties, in their original incarnation, are venues for participation. This may seem somewhat unlikely, giving the popular image of silent, Scandinavian men fishing in dark and silence. But the ice-fishing shanty experience encourages a quiet sort of participation; the idea is to get a few people together under what should be wildly inhospitable conditions with some beers and the pretense of a common goal — to catch fish — and get them interacting in a genuine, close-knit way. It’s hard to capture that spirit sometimes in highly programmed spaces, but there are always a lot of shanties that do it right.

The two in particular that really did it for me were, not coincidentally, programmed in part by returning ASP participants, who’ve refined their approach over the years. One was a new concept, the other an old and tested one. Both gave me some of the most joyous experiences of the winter. 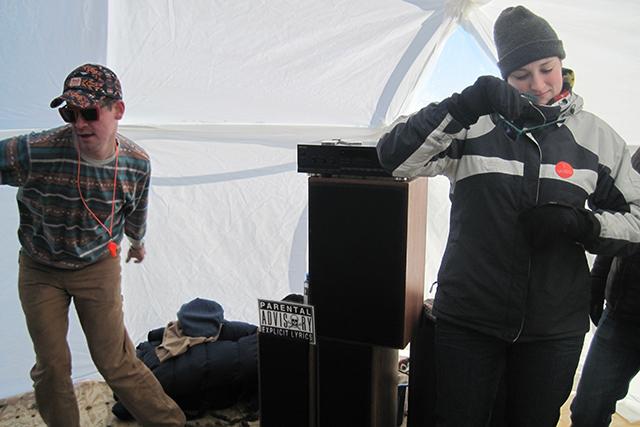 MinnPost photo by Andy Sturdevant
There’s something sort of surreal about the dance shanty, with the hosts dressed for 70 degree weather while everyone else is bundled up.

The old and tested approach was the Dance Shanty, created by John Each, John Pederson, Bethany Hall, Jake Ryan, Michael Rasmussen and Michael Hoolihan. It’s what it sounds like — a simple wooden structure, maybe 10 feet wide and 7 feet high, made up of incredibly fragrant cedar, with a speaker system and playing dance music. The playlist when I was in there: “Ignition (Remix),” R. Kelly; “Rapper’s Delight,” the Sugarhill Gang (“what you hear is not a test / I’m rapping to the beat” is one of my favorite non sequiter boasts in the annals of pop music); “Let’s Go Crazy,” Prince; “Ain’t Too Proud to Beg,” the Temptations. A pretty perfect block of dance music.

The shape and materials capture heat well, and the place is usually full of people dancing. The two proprietors in there on Sunday were dressed strikingly different from most people you find on the ice — non-boot shoes, loose shirts, no winter hats. They each act as a sort of three-in-one emcee, concierge, and DJ, welcoming newcomers, throwing laudatory plastic sunglasses on particularly gifted dancers, and generally keeping things moving. It was hot enough in there from the exertion that winter outfits weren’t necessary, so there’s something sort of surreal about the whole scene, these two guys dressed for 70-degree weather in a rustic wood structure that smells like a cabin. People can wander in, look around, and leave right away, or they can stay and go crazy for as long as they can stand it. That sort of free-flowing, self-directed activity is the best kind. 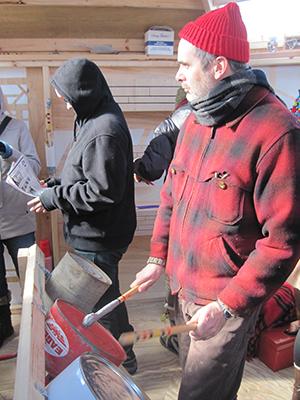 MinnPost photo by Andy Sturdevant
In the chaos, a rhythm or melody starts to coalesce,
everyone banging along in unison for a bit.

A similar approach to audience participation could be found in the Music Box, by Paul Owen, Jeff Berg, Tan Nguyen, Chris Gorder, Mike Haeg and Derek Ahlberg. A hexagonal structure heated (as many of these are) by propane and stuffed from floor to ceiling with wall-mounted bottles, noisemakers, chimes, homemade string instruments, pots, pans, tubular bells, chimes, and almost anything else than be struck, rung, or sounded. Walking in, you see that it’s full of all sorts of people, clanging away at the fixtures. Some people jump right into it immediately; others give one of the instruments a try, and still others fall back and watch it all happen around. In the chaos, a rhythm or melody starts to coalesce, everyone banging along in unison for a bit. And then it falls away again. Free-flowing, self-directed activity at its finest.

In coming weekends, on my follow-up visits, I’ll be sure to investigate some of the others that look interesting: Ice Ice Maybe, the icebound boutique. Or the Sunrise Shanty, where simulated sunrises are promised. Or the Curling Clubhouse, complete with a full-sized curling court carved out on the ice. It’s kind of crazy to wish there were more weekends in February, but if anything can make me want such a thing, it’s the Art Shanty Projects.

Art Shanty Projects: So fun you yearn for a longer February