Uptown Minneapolis doesn’t have a 23rd Street, as you probably know – the grid leapfrogs from Franklin to 22nd to 24th. But if it did have a 23rd Street, it would pass directly through the showroom at Studiiyo23 on Hennepin Avenue. By either coincidence or cosmic alignment or something else, the showroom at the Studiiyo23 shop and gallery holds one of the most impressive collections of Air Jordan shoes (#23!) in the region.

Studiiyo23’s two rooms are full of artwork, clothing, and other accessories – many of them created in-house – but the back showroom, added in March of last year, is a sort of Air Jordan museum. Built with reclaimed wooden pallets, the back wall is at least 10 feet high, and from floor-to-ceiling it’s single vintage Air Jordan shoes, all of which are carefully displayed on racks. The clean lines and bright tones of the shoes sit in contrast to the rustic wooden display behind it, each shoe looking less like a consumer good for sale and more like an artifact. 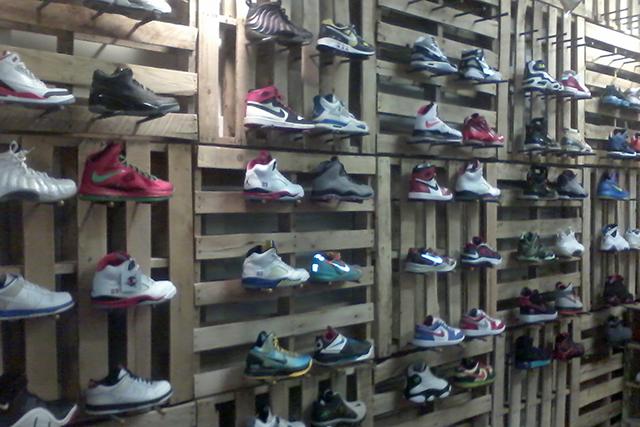 MinnPost photo by Andy Sturdevant
The back showroom at Studiiyo23, added in March of last year, is a sort of Air Jordan museum.

All of these shoes are sold on consignment from collectors; there are no prices or tags displayed. I actually snapped into museum mode when I looked at them, wishing there were labels with the year of origin and some additional information. But it only took seeing a few interactions with staff and customers to realize that no one actually needs didactics. “Do you know much about all of the different models?” I naively asked an affable clerk named Sean. He smiled pityingly, and nodded his head. “Oh, yeah.” Anyone coming in to look at the wall of Air Jordans knows exactly what he or she is looking at.

The Air Jordan, manufactured by Nike since 1985, is one of those physical artifacts that have a wildly devoted following around them. People take them seriously – when a new shoe is released, Studiiyo23 can have people lined up around the block waiting for them. The Air Jordan represents a perfect convergence of industrial design, fashion, and marketing.

There are now 29 models of the shoe, released annually, and then dozens of variations, hybrids, special editions, retros, updates and others released with some regularity on top of those, several times a year. Each particular model has its own idiosyncrasies and features, as well as what are called colorways – color schemes, mostly based on the Chicago Bulls’ red, black and white, but also neon greens, metallics, cement grays and everything in between.

There’s an Air Jordan clock in the front of the store, a model of each of the first 12 arranged on a large metal wheel as if a number on a clock. Following them clockwise, you see the development of the aesthetic, and get a sense for the development of Michael Jordan from an unusually gifted young player to a dominant force in professional basketball to a global brand. 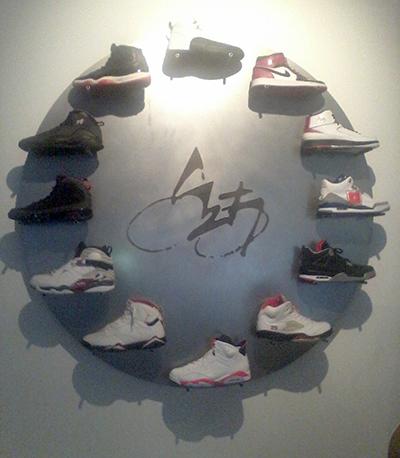 MinnPost photo by Andy Sturdevant
There’s an Air Jordan clock in the front of the store.

Starting at 1:00, the Air Jordan I, from 1985, has that vaguely moonboot quality lots of ’80s athletic footwear had; it seems to be of a totally different era. When an old model is re-released, it’s labeled as “retro,” but the I is really the only Air Jordan that looks retro in the way that term is traditionally understood.

The Jordan II – Sean tells me the design was based on luxury Italian bootwear – starts to manifest some glimmer of high fashion. The III is the first to really break out of the mold. Said to be Jordan’s favorite, it looks as utterly unlike a Chuck Taylor as a Concorde jetliner looks like a propeller-driven DC-3. The “Jumpman” logo emblazoned on the back for the first time, an elephant-print pattern, and the leather swooping up and across in unexpected ways, it looks like a piece of technology.

You can easily go on from there doing model-by-model analyses of each. Once you start noticing the details on something like this, you can begin exalting in them.

So it’s easy to begin noting small distinctions, and then making value calls, picking favorites and failures, comparing the plastic shell-like designs of the 11s and 12s to the streamlined, minimal lines of the later shoes (no one’s asking, but I’ll go on the record anyway as preferring the Air Jordan I’s – the purest, most utilitarian vision). Sean compared them to something like a Chanel bag, which seems to be a closely related cousin. If not exactly in terms of price – a Chanel bag starts in the low quadruple digits, whereas a consignment sneaker can be anywhere from $150 to $600 – but perhaps in terms of desirability, detailing, and utility as a status symbol.

The Internet is full of sneakerheads bickering about stylistic variations that would seem completely prosaic to an outside observer, but when you see them in person, you realize it’s those variations that turn a person into a connoisseur – a black tongue or translucent sole here, an odd or distinctive colorway there. There are plenty of other shoes for sale at Studiiyo23, but the Jordan account the shop has with Nike makes the Air Jordans the center of attention and a point of pride. No other shoes seem to inspire the same devotion. 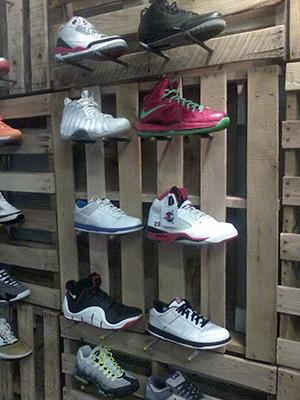 Sean says the people who buy the Air Jordans do so for any number of reasons. Some are indulging a childhood mania or continuing a pop cultural interest from their youth; others do it for social or aesthetic reasons, because they like way they look or the status they impart to the wearer.

I ask Sean if he thinks this enduring popularity is because of Jordan’s stature in the history of basketball, or because of the way his shoes are designed. “Both,” he says. And that’s true: Jordan is such an all-powerful historical force, both in terms of pure athleticism and the canniness of his marketing instincts that it’s difficult to uncouple the two. Nearly two decades after his first retirement, the Air Jordans are as coveted as ever. Kids still line up for them.

White on red and black

Studiiyo23 has a lot of different projects going at any given time: in-store performances, original artwork on display (I picked up a couple of prints by a young Minnesota-educated, Chicago-based artist named Nicholas Ballesteros when I was in), fashion shows, and other cultural events.

All of these make it fit in nicely with the row of independent, culture-minded Hennepin Avenue shops nearby that include the Fifth Element and Familia Skate Shop.

But it’s that back wall of Air Jordans running along a nonexistent 23rd Street that that really stops you and compels you to think about commerce, design, aesthetics, social capital, technology, and how good a white midsole looks against red and black grain leather.