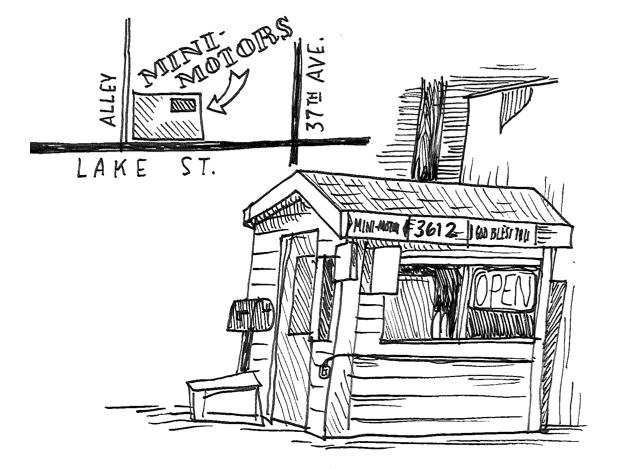 Bob Anderson, the proprietor of Mini Motors at 36th Avenue and East Lake Street in Minneapolis, has a very good reputation around the neighborhood.

While I was looking around his tiny 40-by-40-foot used-car lot – there currently are only six cars for sale on it – a man walked up to the fence from the sidewalk.

“You looking to buy a used car?” he asked.

The guy laughed. “No,” he said. “I haven’t seen Bob around for a while. But he’s a really nice guy.” He told us how when he moved into the neighborhood from South Dakota, 30 years ago, and Bob almost sold him a used car his first time walking by.

I asked the man how long Bob had been there. “Well, I moved here in the ’70s,” he said. “And he’d already been around for awhile back then.”

There’s an online corroboration of the passerby’s story, expressed in almost identical language. “These people were so nice,” writes a Google Plus reviewer on Mini Motors’ page. “I was out for a walk and this guy almost talked me into buying a used car.”

When I tell Bob Anderson about this over the phone a few days later, he pauses. “Hmmm.” He then tells me talking people into buying cars is completely antithetical to his sales philosophy. “I don’t try to sell people cars. If they like it, it’s almost like they have to try to buy the car. It’s poor business sense, but I don’t push. One time I did push, and I sold one car, and it bothered me.”

“I’ve never strived to have a fancy car sitting out there to impress anyone,” he says. “I’d rather have an old car impress you.” There are currently six classic cars on the lot right now, ready to impress.

Mini Motors is probably Minneapolis’ smallest, friendliest, and most unusual used car lot (“It didn’t get the name from hard thinking,” Bob explains. “It is mini.”)

It’s tucked in the middle of the alley running between 35th and 36th Avenues  and the small commercial storefront that houses Miller Upholstering, across from the Viking Village Cleaners on East Lake.

It’s almost invisible; for years, I thought it was the parking lot for the adjacent buildings. The lot itself is smaller than the White Castle parking lot, right next door. 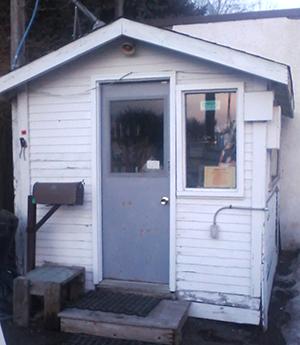 Judging by E.F. Schumacher’s famous maxim that “small is beautiful,” Mini Motors is gorgeous. There is a tiny structure on the northeast corner of the lot – about the size of an ice fishing shanty – built in 1948 that contains Bob Anderson, his file cabinets, a lot of signage and memorabilia, and not much else. He’s been there since 1969.

“The little car lot has been my mainstay for 45 years,” he tells me. “It’s a nonprofit organization that wasn’t designed that way.”

Open some days, some times

Bob was born in Nebraska, grew up in Iowa, and came to Minnesota in 1961. He’s been in the used car business for nearly his entire time in the state. He bought the lot in 1969 year from a fellow named Walter, he remembers. “He was branching away from cars, and going into television sales. Said he could make more money selling used TVs than he could selling used cars. Must have been a push towards television in 1969.”

I tell Bob it sounds like he ended up with the more viable business model. “Yeah, you don’t see many used TVs these days, except in pawn shops.” But people are still buying used cars.

Actually, Bob wasn’t in there the two times I stopped by. There was a note taped to the window that said: “No salesman?” It then listed a number. “Could be at the Vets Hosp. Call me – Bob.” 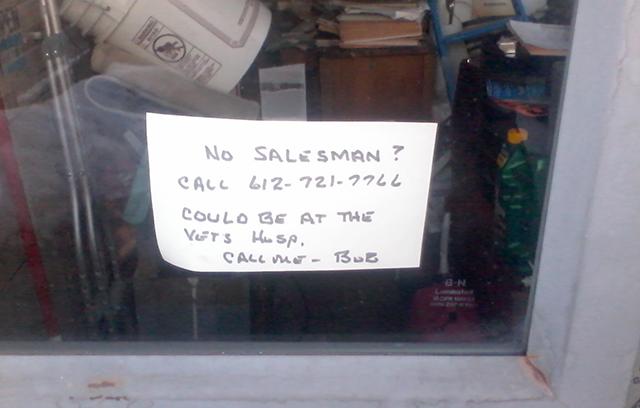 Bob is something of a novelty sign aficionado. There’s also one of those great 1980s-era wooden business hours signs in the window: “OPEN most days about 9 or 10/ Occasionally as early as 7, but SOME DAYS as late as 12 or 1/ We CLOSE about 5:30 or 6/ Occasionally about 4 or 5. …” Inside the office, there’s a sign with the famous truism about currency, articulation, ambulation, and bovine excrement. 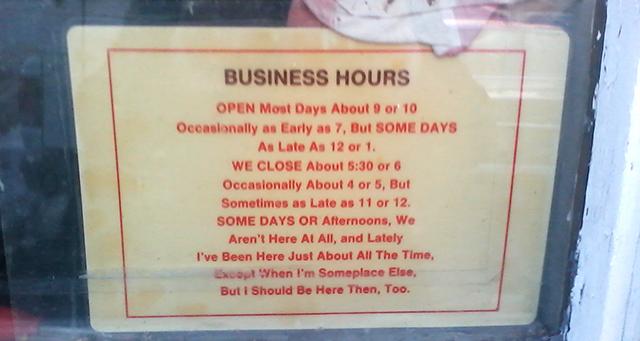 MinnPost photo by Andy Sturdevant
Bob is something of a novelty sign aficionado.

The little white office building is fascinating – it can’t be any larger than 6 by 10 feet. You just don’t see inhabitable urban structures so compact in our wide, low, and sprawling Twin Cities. I tell Bob it reminds me of an ice fishing shanty. He chuckles, and tells me he’s heard that one before.

The littler, the better

“Everyone says it looks like a ice fishing shack,” he explains. “It was originally a shipping crate for Land O’Lakes creamery. They shipped a generator in the thing, someone saw it, put a roof on it, a door, a couple of windows, and it was an office.”

I say something about having a computer in there, and Bob laughs uproariously. “You saw the office. Did you see anything in there more modern than a remote control? We always get calls for people wanting to sell us printers. I tell them, if you put one in, and I can still get out of the office, I’ll take it.”

“There’s some advantages. It’s humorous to have a little car lot like this.”

The other advantage is the cars themselves. Of the six on the lot now, all are pretty magnificent specimens of classic automobile. Bob deals only in vintage and collectible cars, and a few of the cars on the lot seem to have come from the same collection. 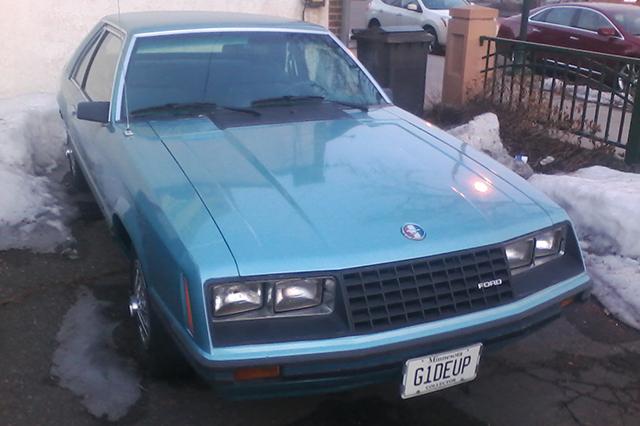 Notable, for example, is the high percentage of vanity plates. In fact, half of the inventory has them. “WHASUP” is a classic. The other two are collector’s plates. The electric blue early ’80s Ford Mustang’s plate bears the directive “G1DEUP.” The black Mercedes is almost cartoonish in its rich-guy vibe: Not only is there a Nantucket sticker in the rear window, but the collector’s plate asserts “NOT ACLU,” lest the previous owner be mistaken for a limousine liberal. (Unless, as a reader pointed out later, it actuall reads “NOT A CLU,” but it seems pretty ambigious to me.) 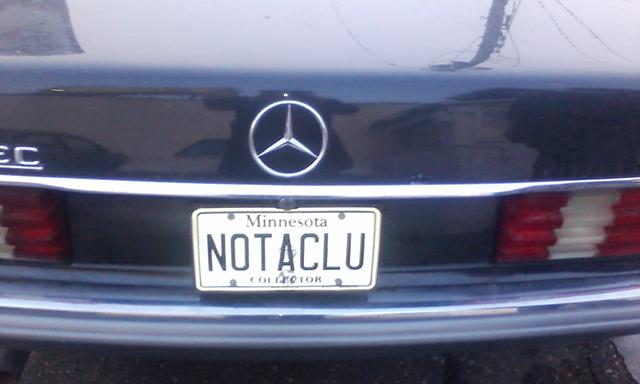 MinnPost photo by Andy Sturdevant
…lest the previous owner be mistaken for a limousine liberal.

I ask Bob about his clientele. “It’s people that remember having a car like one I have on the lot. ‘Oh we used to have one of those, and it was a wonderful car.’ So they buy it for their grandson, or daughter, or whoever else.” The first car he sold was his very own, a 1961 Corvette: “A Corvette kind of brightened the lot a little bit.” He found a buyer almost immediately, and used the money to buy three more cars.

“A lot of people who’ve bought cars do stop in, and say, ‘Do you remember me?’ I don’t remember the individual, I remember the vehicle. They tell me which car they bought, and I say, oh yes, it was right over there.” He keeps in touch with a lot of his clients, long after the transaction has taken place.

In fact, later this week, he’s going out to lunch with an old customer. “She bought the biggest car I had. And she was tiny – couldn’t have been more than 4-foot-10. She had to put two pillows on the seat to see over the wheel. She could barely reach the pedals. We’ve remained in contact for many, many years.”

I tell Bob I’ll stop by again, and hopefully catch him in the office. “That’d be wonderful,” he tells me. “We’ll wine and dine on Coca-Cola and a hamburger.”

Thanks to Ed Kohler for the tip and the company.

Economy-sized dealership has a rich history and an outsized personality